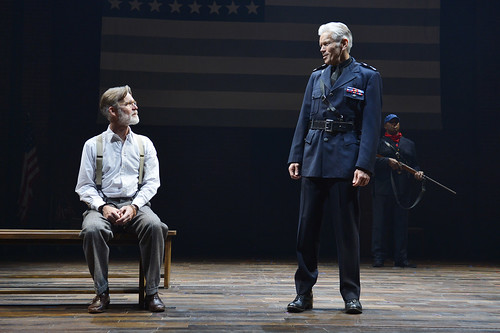 
Berkeley Repertory Theatre’s It Can’t Happen Here is a nightmare on so many levels, and that’s mostly a good thing in the world-premiere adaptation of Sinclair Lewis’ 1935 novel.

This is the right story at the right time, and therein lies the dark heart of this nightmare. Eighty-one years ago, Lewis observed the world around him – race riots and severe economic disparity at home, fascist demagogues on the rise in Europe – and conjured a vision of how things could go if were weren’t very, very careful in who we elected president in 1936.

In Lewis’ novel, which has been freshly adapted by Berkeley Rep Artistic Director Tony Taccone and Bennett S. Cohen, the United States is a country at odds with itself. Half the population is disaffected and tired of the Big Money, of which they have none, controlling all the strings of the “belching politicians” in Washington, D.C. An enterprising businessman, Buzz Windrip, hears the voices of the masses and throws himself into the political ring as a presidential candidate. He’s got a good head for business, they say, and he tells it like it is. People like that. Others feel he should be on the vaudeville circuit rather than in a race for the presidency, but he gains the trust (and endorsement) of the religious right, and off he goes.

One of Windrip’s greatest skills is pitting “everybody against somebody” and seizing power, and that’s just one of many echoes reverberating through the Roda Theatre as this tale from eight decades ago rattles the audience and makes us wonder how we could be here, in this exact same spot, in such a relatively short time with so little national memory of having been somewhere like this before. Granted, the terrors being addressed in Lewis’ story were primarily affecting Europe prior to World War II, but the dangers were everywhere and as ever present as they are now. 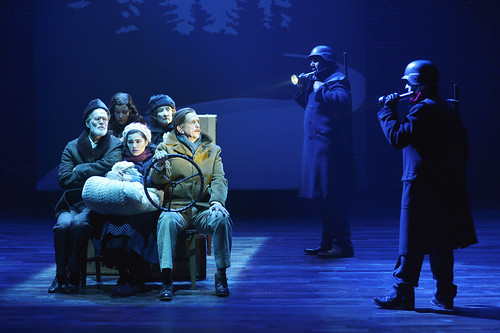 That’s the chill of this production, which zings and zips through its first act like a parable with the sting of a slap to the face and a knee to the crotch. The crack 14-member ensemble, under the direction of Lisa Peterson, addresses the audience at the top of the show, setting the tone for a kind of literary/presentational style that will continue throughout the show’s 2 hours and 15 minutes as they move all the furniture, set the scene, introduce us to new characters and otherwise serve as narrators in this fast-paced journey from functioning democracy to totalitarian hellscape.

Tom Nelis is the central character, Doremus Jessup, the editor of a small-town New England newspaper, and like Mr. Webb, the newspaper editor in Our Town, a character he often calls to mind, he serves as the town’s moral conscience. He’s frightened by what he sees happening not only in his country but also in his own ordinary town. The “Minute Men,” a kind of national guard just ripe for evolving into a militia, preys on the worst fears and failings of the local young men (including but not limited to staunch antisemitism), and he, along with a few other sharp townsfolk, including the woman with whom he’s having an affair, sense imminent disaster.

When the action shifts to a political rally celebrating candidate Buzz Windrip (the electrifying David Kelly), the dial turns way up on the excitement/horror factor. Listening to Windrip (and trying not to hear the yuge, bleating voice of a current grossly unqualified candidate), it’s easy to start extrapolating to our modern times. What if our current guy wasn’t such an idiot and wasn’t such a godawful speaker. What if, like Windrip, he was eloquent and charismatic – or even smart. That would spell disaster for sure, just as it does in Lewis’ alternate America.

There are diminishing returns in Act 2 as a version of Europe before and during World War II plays out in the United States, with a scrappy band of rebels fighting the good fight and the Jessup family shattering in multiple ways. So much happens of such severity that emotional impact is lost. Events are merely sketched in as we rush through violence, insanity and other assorted horrors, and the ending isn’t chilling so much as a shrug and a sad head shake acknowledging that all of this is bad, bad, bad and we shouldn’t let it happen.

This well-produced gloom features a marvelous and quite active ensemble that also includes some standout work by Sharon Lockwood as a rabble-rouser, Doremus’ head-in-sand wife and a kind revolutionary; Deidrie Henry as Lorinda Pike, one of the small town’s most acutely aware citizens; and Anna Ishida as a grieving widow and fierce rebel.

The reality of 1936 is that Franklin D. Roosevelt defeated Republican candidate Alf Landon. Adolf Hitler and the Nazis were in full power of the Reichstag. In Italy, Mussolini was gearing up to give Hitler a big political bear hug, and citizens wondered how this could be happening here. Berkeley Rep’s resurrection of Lewis’ cautionary tale certainly holds sway over the choir to which it is preaching, but what about those who deem our current gasbag candidate a worthy leader? This bleak vision might just be the happy ending they’ve been looking for.