I have two recommendations for online theater streaming. The first is a play written by and starring one of our best stage actors, and the second is an engaging reading of a timely play about race that happens to be 66 years old. 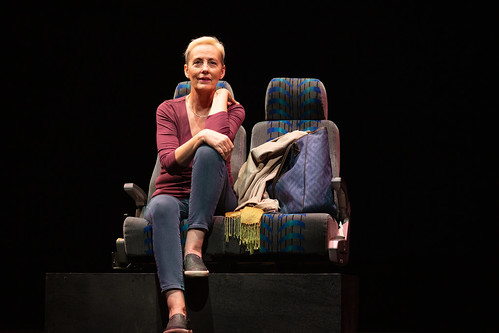 Julia Brothers plays herself in her solo show I Was Right Here, streamed as part of the San Francisco Playhouse season. Photo by Donny Gilliland

A train ride through memory
If you’ve ever had the pleasure of seeing Julia Brothers on stage in one of her many Bay Area appearances, you know that she is one of those performers you miss at your own peril. For San Francisco Playhouse’s streaming season – and hot on the heels of their extraordinary [hieroglyph] (read my review here) – Brothers not only stars in a solo show, but also makes her debut as a playwright with I Was Right Here. That makes two reasons you don’t want to miss this.

As usual, Brothers is absolutely compelling on stage (even being filmed on stage), and the story she’s telling this time out is her own. Taking the train from Manhattan to her native New Jersey to visit her 97-year-old mother, Brothers begins musing on memory. Lucille, her mom (whom she affectionately calls “madre”), is dealing with dementia and is losing great swaths of memory. Julia is serving as her mom’s link to the quickly receding years, and that sets the actor on her own journey through ghosts of her past and memories she has always relied on but isn’t entirely sure really happened.

In the play’s 75 minutes, Brothers the playwright gives Brothers the actor a highly entertaining variety of places to visit – RFK’s funeral train when Brothers was just a girl, boyfriends and friends who died far too young and a recurring sense of child-like terror when she feels she is not quite as visible or as present as she thinks she is. Director Padriac Lillis and Brothers create a smooth narrative that flows easily through the present and the past so that when Brothers arrives at her destination, she has reached more than just a place.

Brothers delivers a beautiful performance, and though she re-lives loss and trauma from her past, she can’t disguise the abundance of affection for many of the people who populate her recollections. This on top of Brothers’ own incandescence makes I Was Right Here a journey worth taking. 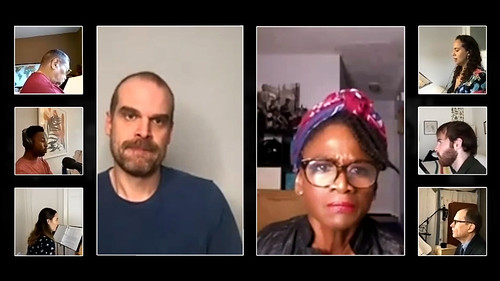 Trouble: When theater reflects the world
In the last year, we have seen lots of staged readings via Zoom – it’s been a touchstone to live theater that is reasonably easy to execute and distills the theatrical experience down to actors and words. As we reflect on a year without being together in theaters, it would seem Zoom readings are going to be here a while longer. If they’re all as good and as smartly produced as American Conservatory Theater’s Trouble in Mind, that will be OK.

The first of a trilogy of readings in A.C.T. Out Loud, this 1955 drama by Alice Childress is the flashpoint play we need right now. Childress goes deep into American race and oppression and the shallowness of polite, so-called enlightened society in a story about actors coming together in the mid-’50s to produce an anti-lynching play.

If people show up for a play (or a reading of a play), it figures that they would be interested in going behind-the-scenes at the making of a play, and that’s the genius of Trouble in Mind. Theater is a crucible, and it doesn’t take long into the first rehearsal to begin feeling the tension between the white actors playing the landlords and the Black actors playing the sharecroppers and the mix of attitudes embedded in the play (the play within the play) and the attitudes the actors bring in from the world just outside the theater doors.

Who is willing to stand up and say, “This is some racist bullshit right here”? Who is content to calm the waters and keep a steady paycheck? And who is going to pretend to be an ally until their racist core is fully revealed?

Director Awoye Timpo has assembled a superb cast, and one of the great delights of this reading – something that really helps highlight the performances and underscore the relationships – is the way the reading is “staged” so that it doesn’t look or feel much like Zoom but gives a sense of actors stepping in and out of the action.

Hostility bumps up against compassion, fear battles rage and courage wrestles with cowardice, and that makes for good theater. It also makes for relevant theater that, sadly, makes it seem we’ve hardly moved the needle in almost 70 years.

The entire cast is excellent, but the central conflict is between the white director, Al Manners (played by David Harbour of Stranger Things fame) and his Black star, Wiletta Mayer (played with blazing intensity by Patrice Johnson Chevannes). Their polite, professional relationship degrades quickly in the face of reality, and that makes the pretend of the play almost impossible to uphold. It all comes down to Wiletta saying, “We have to go further and do better.” And that may be the realest thing of all in the play’s two-plus hours.