This review originally appeared in the Oakland Tribune and Bay Area Newspaper Group newspapers on December 3, 1999.

Fountain of truth: Metamorphoses at Berkeley Rep is far from all wet

Mary Zimmerman’s Metamorphoses is awash in stunning images. You might even say the play is dripping with them.

Set mostly in a shallow pool of water, this adaptation of the mythos of Ovid sails into theatrical nirvana on waters both choppy and smooth.

Now Berkeley Rep brings Zimmerman, her cast and her pool from Chicago to the Zellerbach Playhouse on the University of California, Berkeley campus for a nice long run. This is the same theater where Zimmerman dazzled us with her Journey to the West two years ago. 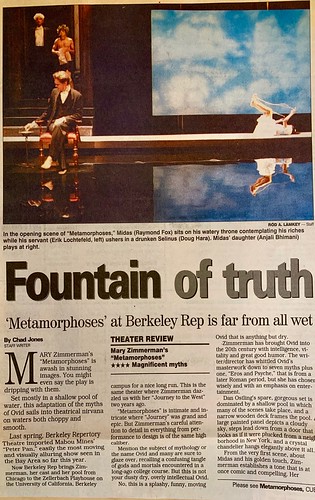 Metamorphoses is intimate and intricate where Journey was grand and epic. But Zimmerman’s careful attention to detail in everything from performance to design is of the same high caliber.

Mention the subject of mythology or the name Ovid and many are sure to glaze over, recalling a confusing tangle of gods and mortals encountered in a long-ago college course. But this is not your dusty dry, overly intellectual Ovid.

No, this is a splashy, funny, moving Ovid that is anything but dry.

Zimmerman has brought Ovid into the 20th century with intelligence, vitality and great good humor. The writer/director has whittled Ovid’s masterwork down to seven myths, plus one, “Eros and Psyche,” that is from a later Roman period, but she has chosen wisely and with an emphasis on entertainment.

Dan Ostling’s spare, gorgeous set is dominated by a shallow pool in which many of the scenes take place, and a narrow wooden deck frames the pool. A large painted panel depicts a cloudy sky, steps lead down from a door that looks as it if were plucked form a neighborhood in New York, and a crystal chandelier hangs elegantly above it all.

From the very first scene, about Midas and his golden touch, Zimmerman establishes a tone that is at once comic and compelling. Her language is a heady blend of classic storytelling – full of formal, elegant phrases – and modern cadences sliced with ironic humor.

Listening to the 10 fine performers spin these myths is captivating, but there’s a childlike joy in watching the stories come brilliantly to life.

When lovers Alcyon (Erik Lochtefeld) and Ceyx (Louise Lamson) are separated, Alcyon board a ship and sails across the sea. The narrator (Lisa Tejero) indicates this by sailing a toy boat across the water. Then a storm hits, and the actors douse Lochtefeld with buckets of water, and the chandelier flashes like a bolt of lightning.

Or when grief-stricken Orpheus (Lochtefeld) descends into the underworld in search of his lost love Euyridice (Jessica Meyers), he is doused in a steady stream of tears that falls like rain from the ceiling.

Mara Blumenfeld’s costumes look great soaking wet, and her light touch allows Hermes (Adrian Danzig) to wear a leather jacket with wings painted on the back.

The performances are physically robust and emotionally acute. Raymond Fox is hilarious and then heartbreaking as Midas, while Anjali Bhimani as young Myrrha is a tormented soul condemned by the goddess Aphrodite (Hallie Beaune Jacobson). Myrrha has scorned the goddess, so the young woman is forced to fall in love with her father (Chris Kipinski), resulting in some of the play’s most affecting aquatic images.

Doug Hara, whom many will remember as Monkey in Journey to the West, is a drunken delight as Selinus, a follower of Bacchus, and then again as a sunglasses-wearing Phaeton, son of Phoebus Apollo, the sun. Floating on a yellow air mattress, troubled Phaeton seeks guidance from his shrink (Tejero).

But Hara is at his most powerful as Eros, nude, winged and blindfolded. When his love entwines with Psyche’s soul, it’s a sublime moment of mythological proportions – one of many in the show’s all-too-brief 90 minutes.

With all the splashing about, patrons sitting in the first few rows are liable to get wet. But even if you remain drip dry, you will still find yourself totally immersed in the wonders of those magic changes that are Metamorphoses.