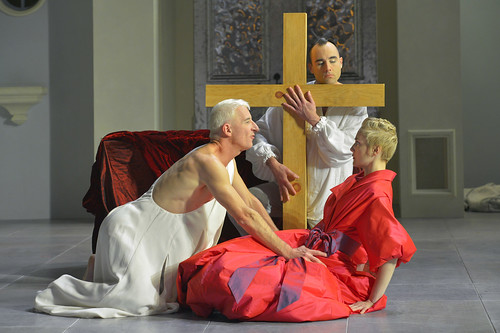 
Faith is one of the most valuable and powerful things human beings have to give away, and anyone who takes advantage of that faith with anything less than sincerity and devotion qualifies as the most heinous of villains. That’s why Molière’s Tartuffe is so damn funny…and dark…and unsettling.

The oft-banned 1667 satirical comedy has had a long history of production and controversy over the last 350 years, and director Dominique Serrand’s new production – a co-production of South Coast Repertory (where it opened), Berkeley Repertory Theatre and Shakespeare Theatre Company in Washington, D.C. – adds an admirable chapter to the play’s history.

Sleekly designed (by Serrand and Tom Buderwitz on sets, Marcus Dillard on lights and Sonya Berlovitz on costumes) and full of sumptuous tableaux that conjure artfully composed paintings, Serrand’s production is tightly focused and performed with astonishing vehemence. This is comedy played at operatic levels, and it works. Extremity is a key component to the story, and this game cast plays it to the absolute hilt, both physically and emotionally.

Of course Orgon (Luverne Seifert), the master of the house, is the primary example of that emotional ferocity. He has taken to the charlatan Tartuffe like a Bush boy to a Cheney. For whatever reason, Tartuffe has really bamboozled poor, devoted Orgon, and no one in the household can sway that devotion.

Perhaps the most intense detractor is housekeeper Dorine, played by the astonishing Suzznne Warmanen, whose mix of anger and hilarity is atomic in its detonation. She cannot keep quiet about the absurdity of her master’s behavior, and she will not see him trample over his grown children, son Damis (Brian Hostenske) and daughter Mariane (Lenne Klingman). Warmanen’s performance is so astute she can go from hostility to terror to compassion in the course of a few sentences, which is a mark of Serrand’s production in general: farcical hilarity, darkly creepy satire and genuine humanity all mixed craftily together. 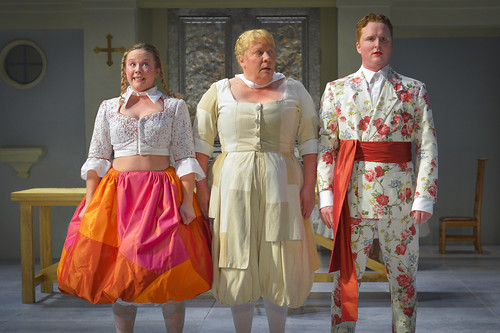 We also see this mix in the sterling scene between Klingman’s Mariane and her fiancé, Valere (Christopher Carley). In their brief but potent interaction we see why these two are meant to be together. They’re both buffoons of the spoiled brat variety, but their hearts are cracked open by one another. They’re an electric combination, and any attempt by Orgon to split them up will end in disaster (or, perhaps more surprisingly, a genuine act of kindness).

When we finally meet Tartuffe, there’s been such build-up of both a pious and profane nature that it would seem the actual man couldn’t help but disappoint. But Tartuffe is played by Steven Epp, one of the most capable actor/clown/otherworldly forces on the American stage. His Tartuffe, abetted by two gracelessly graceful henchmen (Nathan Keepers and Todd Pivetti), is measured and composed and crafty. He’s also an actor of some skill, so hoodwinking Orgon isn’t all that difficult. He can work himself into a religious froth when he needs to, but he conserves his dramatics and unleashes his heavenly theater only when he needs to. It takes energy, after all, to seduce Orgon’s wife, Elmire (Sofia Jean Gomez), who is no shrinking violet. Her disgust at this beastly bastion of beneficence registers powerfully, and the scene that proves to be Tartuffe’s undoing, when a concealed Orgon watches her submit to Tartuffe’s violation, is upsetting to the point where you want to scream for Orgon to get off his fat, pious ass and put an end to the Tartuffian nonsense.

Using a translation by David Ball, who intermittently peppers the dialogue with rhymed couplets (“It’s a domestic disaster to see how he bamboozles the master”), Serrand’s Tartuffe is what we’ve come to expect from the former head of the late, great Theatre de la Jeune Lune: gorgeous to look at, even better to experience the emotional thrill ride from laugh-out-loud comedy to shocking reality to outrageously delicious bad behavior. It’s easy to imagine that Molière himself would be pleased.