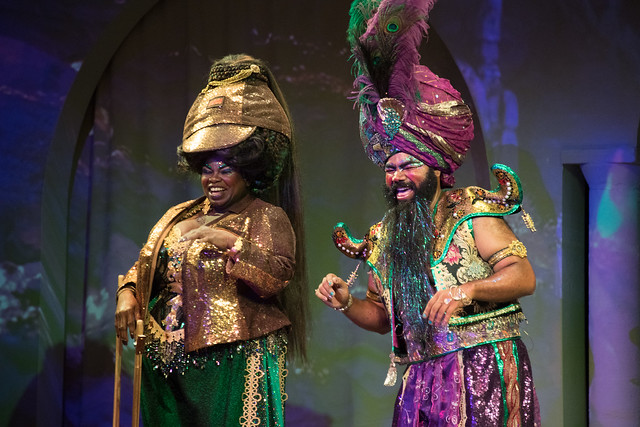 Renée Lubin as Genie of the Ring (left) and JM Appleby as Genie of the Lamp in the premiere of The Magic Lamp panto at the Presidio Theatre. Below: Curt Branom as Widow Twankey (left) and Danny Scheie as Abba, the bad guy. Photos by Terry Lorant


The holiday season just got a lot zippier with the opening of The Magic Lamp, a family show at the gorgeously refurbished Presidio Theatre (in the Presidio, not the movie theater on Chestnut of the same name) fashioned in the style of the much-loved British panto tradition. Pantos, if you don’t know, are big business in England this time of year, with shows generally based on a fairy tale or well-known children’s tale but gussied up with outrageous costumes, zany humor of the slapstick variety, cross-dressing and lots of audience participation in the form of sing-alongs, call-and-response or active booing of the bad guy.

The Magic Lamp, written by the wife-and-husband team of Christine Nicholson and Luther Hanson and directed by Tamroz Torfeh, includes all of that plus a whole lot of Bay Area shout-outs and a bundle of hit songs from various eras re-fashioned to tell an updated version of the Aladdin story.

With its fast-paced comedy, pop songs and larger-than-life costumes and wigs, there’s definitely a vibe here that recalls Beach Blanket Babylon, the gone-but-never-forgotten comedy revue that ran for 45 years at Club Fugazi. So it should come as no surprise, then, that there’s a large contingent of Beach Blanket veterans both on stage and behind the scene bringing this energetic holiday endeavor to life.

In this re-telling, Aladdin (Rotimi Agbabiaka is a Daly City-based delivery boy for an egg business run by his mother, Widow Twankey (Curt Branom playing the drag role to the hilt). He falls in love with Jazz (Sharon Shao), daughter of Sultana (Rinabeth Apostol), the richest woman in the world thanks to her online empire, Sultanazon.com.

Bay Area actor/treasure Danny Scheie is on hand to elicit boos and hisses as Abba, the Dodger-loving baddie who needs Aladdin to descend into a cave of jewels and bring him back the magic lamp. That’s all pretty basic, but what’s fun here is that there’s not one but two genies. Renée Lubin is the public transportation-loving Genie of the Ring and traverses the stage via turntable and cable car/magic carpet, and JM Appleby is the Genie of the Lamp, the more traditional three-wishes kind of genie. 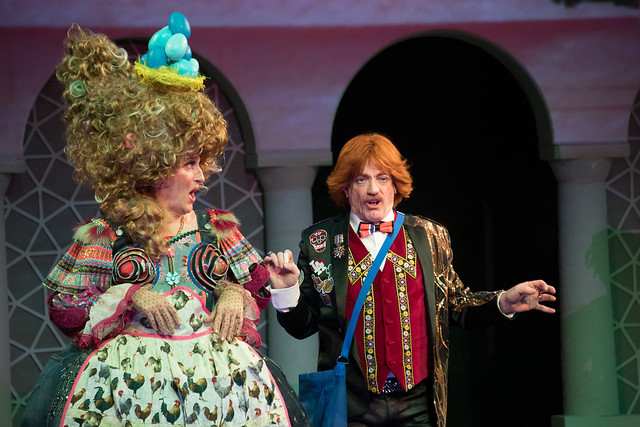 Probably the most enjoyable addition to this version is also the weirdest. Chickens are front and center here, primarily because of the Widow Twankey’s business selling blue eggs (often referred to as “blue balls” to make the grown-ups titter). Aladdin has two sidekicks: the human, Jarvis (Scott Reardon), who also serves as the spirited narrator, and Pecker, a very tall rooster played with admirable commitment by Matthew Kropschot and outfitted in a gorgeous costume by Alina Bokovikova (whose work across the stage is both comic and gorgeous).

And then there’s the scene-stealing trio of hens: Jen Brooks as Preeny, Ruby Day as Queeny and Albert Hodge as Steeny. They speak only in chicken, but their Act 1 number, “Doot Doot Chicken Dance,” is so hilarious that maybe future pantos might want to focus on further flights of the fowl.

At more than 2 1/2 hours (with an intermission), The Magic Lamp maintains an admirable level of energy as the large cast sings, dances (to choreography by Stacey Printz, jokes, tosses candy, vanquishes zombies, clucks and celebrates a big wedding. The aggressive panto style can get a little tiring for some, but these appealing performers (under musical direction by Bill Keck) keep the charm flowing and the laughs coming.

Perhaps best of all, it’s great to see the beautiful Presidio Theatre so full of happy people enjoying a show that overflows with fun and festivity,

FOR MORE INFORMATION
The Magic Lamp continues through Dec. 31 at the Presidio Theatre, 99 Moraga Ave., San Francisco. Tickets are $10-$75. Call 415-960-3949 or visit presidiotheatre.org for information.

COVID Safety at the Presidio Theatre
The Theatre requires all guests to wear a mask at all times while inside the building. All guests 12 and older are required to show proof of full vaccination with a matching photo ID. Full vaccination is defined as two doses of the Pfizer or Moderna vaccine, or one dose of the Johnson and Johnson vaccine. Youth 12 to 17 can use a school ID, birth certificate or social security card in place of a photo ID. Young children under five years old are not allowed.<