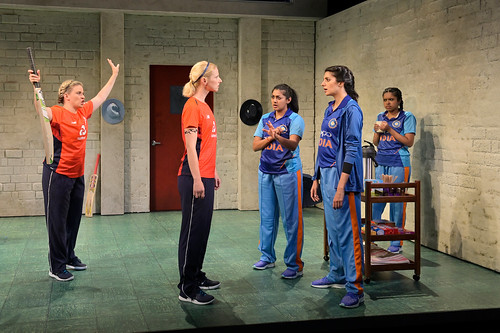 
You could say that Kate Attwell’s Testmatch, the world premiere play at American Conservatory Theater’s Strand Theater, is about cricket. You could also say it’s about untangling the gnarly knots of history. But the impact, especially in the savvy way Attwell has constructed the play, comes from its emphasis on the deep interconnection of everything to everything.

We think we’re watching a play about an International Cricket Council World Cup match between India and England women’s teams – and that makes for a mightily intriguing play – but really we’re seeing the frayed ends of a knotted rope that stretches back to England’s savage colonizing of India. There are infinite ways of examining how the past is directly affecting the present, but Attwell takes her slice from the world of sport, specifically a byzantine, vaguely baseball-ish sport the British brought to India.

There’s a bit of Caryl Churchill in Testmatch (thinking especially of the Anglo-Indian relations in Cloud 9), and I mean that as high praise. Like Churchill, Attwell digs into intimate details and grand theatrics to find the bigger picture. She also bends gender to her will in a quest to find theater in history and truth in fiction.

Directed by ACT Artistic Director Pam MacKinnon, Testmatch has a lively energy, though it surprised me at the end that only 90 minutes had passed. The play somehow feels more substantial and longer than that, which probably has to do with the way Attwell has split the action between present-day England and 19th-century India. In the modern first half, the cricket match in which the India women were leading the England women is interrupted by rain and is unlikely to continue. Three members of each team end up in a sort of ante-locker room to drink tea and vent their frustration. These scenes absolutely crackle with the fire of competition, cultural difference and nefarious secrets. 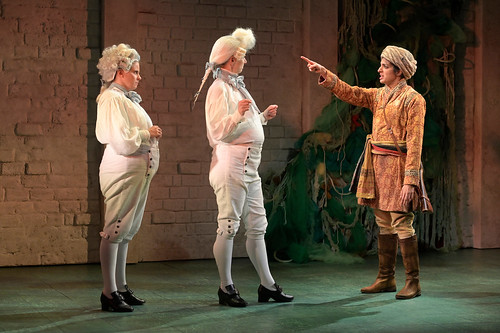 Instead of names, the characters are given a nationality and a number, and it’s England 2 (Arwen Anderson) who works to keep the mood light with her astute observations on the differences between male lovers who play cricket (not so much) and those who play rugby (oh, YES, very much!). In spite of her best efforts, things nearly come to blows and racial epithets are nearly hurled and any pretense of good manners shatters.

From there, Nina Ball’s boxy white set shifts, as do Marie Yokoyama’s lights, and we’re in India watching two male buffoons (played by Anderson and Millie Brooks) in Calcutta as they dither and chortle and otherwise carry out their duties for the East India Company. Safely inside the walls of their estate, all is well. Uniformed Abhi (Lipica Shah) keeps things under control and does not at all approve of upping the opium dose for the lady of the house (Madeline Wise as the delusional, visionary Memsahib). From the other side of the wall comes an exuberant young local woman (the charismatic Avanthika Srinivasan as Daanya) who wants to train with the English cricket team. She’s the first crack in the wall, so to speak, as the reality of India begins to invade the colonialists’ willful ignorance of the damage their raping and pillaging of the country is wreaking. Then comes an emissary from Bengal (a gripping Meera Rohit Kumbhani) with news that would devastate anyone…anyone, that is, but a British businessman intent on squeezing out the last of the country’s riches before beating it back to Britain.

Some of the first half’s energy evaporates in the second half as the tone shifts from locker room reality to gender-bending satire and then again to grim, oppressive reality. Those are big shifts to make, and if Attwell and MacKinnon don’t entirely succeed in making them, the marvelous cast pulls out all the dramatic and comedic stops to keep driving the play to its end. There’s a welcome degree of humor in Testmatch, but this is an earnest examination of how deeply personal history can be and about how we never really plumb those depths or find ways – individually or culturally – to deal with the horror and injustice and greed that have placed us where we are today.