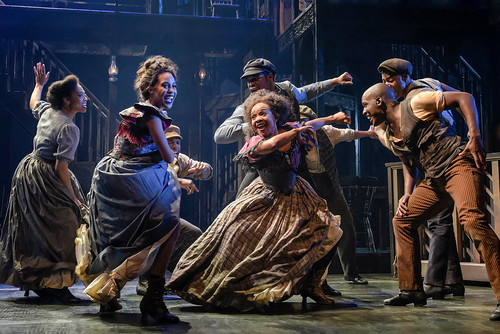 
There are actually two competing musicals in Paradise Square: A New Musical now having its world premiere at Berkeley Repertory Theatre. One of them is much better than the other.

Incredibly ambitious and overstuffed, Paradise Square wants to create excitement about a particular moment in American history with a wonderfully diverse cast and a score that blends show music, traditional music and contemporary sounds (sound familiar? can’t blame producers for not wanting to throw away their shot). But this show, many years in the making, is still fuzzy, unfocused and only intermittently interesting.

In telling the story of the Five Points, a 19th-century New York slum inhabited primarily by Irish immigrants and African Americans, Paradise Square complicates its storytelling by weaving in the life of composer Stephen Foster, whose music provides a base for the score crafted by Jason Howland and Larry Kirwan (the guy who had the idea to create this show in the first place) with lyrics by Nathan Tysen. Foster’s music became synonymous with minstrelsy, so putting his beautiful melodies in service of a story about, as they call it in the show, “race mixing,” is in theory an interesting idea. But in fact, those melodies are obliterated, blasted and torqued beyond recognition much of the time. When we finally get to a straightforward “Beautiful Dreamer,” it’s like we’ve arrived at a clearing full of light after slogging through a dense, dark forest.

Rather than giving us one central story to care about, book writers Kirwan, Craig Lucas and Marcus Gardley give us a handful, none of which are terribly compelling. They also give us dance-offs. In a story that should be rife with tension – racial tension, labor tension, political tension, Civil War draft tension, runaway slave tension, violent mob tension – the greatest intensity and satisfaction comes from three primary dance contests. The first is between a newly arrived Irish immigrant (A.J. Shively as Owen) and a fugitive slave (Sidney Dupont as Will Henry). Owen is doing Irish step dancing and Will Henry is doing Juba-style dancing. Both are electrifying. In Act 2, we get an official dance contest in a neighborhood bar, with the cash prize enough to buy your way out of the draft ($300). The contest begins and ends, but wait! We need a do-over, so Will Henry and Owen can compete head to head once again (and for a solo dance contest, they sure do a lot of singing and dancing with their squads). 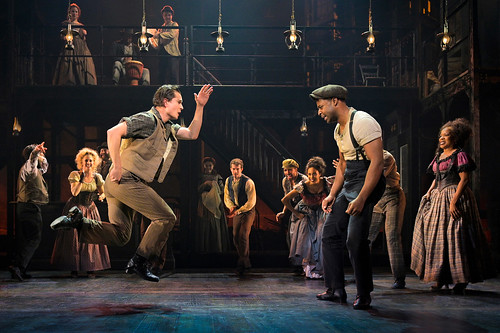 The dancing throughout the 2 1/2-plus hours of Paradise Square is routinely fascinating, often thrilling, which is exactly what you’d expect from choreographer Bill T. Jones. The problem is that the sharply etched choreography feels like it’s for a different, much more sophisticated show. If Paradise Square wanted only to dance, that would be just fine.

Director Moisés Kaufman simply cannot pull it all together. There are some powerful vocal performances from his nearly 30-member cast, but too often the acting is hammy and melodramatic (mostly the fault of the wobbly book). Actors feel like they’re creating tableaux more than they are playing actual people.

The show’s ending is a complete cop-out as the historical trappings fall away and the actors address the audience directly so they can tell us what happened to the characters after the chaos of the story comes to its conclusion. One of the things they mention is that the “race mixing” of the Five Points, primarily between Irish immigrants and African Americans, resulted in a new dance form called tap dancing. Why, oh why is this not part of this show, which just happens to be a musical wherein the best thing about it is the dancing? We see and hear tap dancing only once in the show, and it’s during a flashback to slaves being whipped on a plantation. Talk about a missed opportunity.

The presence of Foster as a character (appealingly played by Jacob Fishel) and as the basis for the show’s score should be more interesting than it is. He was coopting black music and turning it into popular song, which was in turn coopted by the racially repugnant minstrel circuit. One of the black characters gets to go on a tirade about how much she hates Stephen Foster to Stephen Foster, and it just feels irrelevant when the city is just about to explode into the deadly Draft Riots (oh, but wait, can the riots hold on a sec because we also need to do the big dance contest!).

Musicals are beastly contraptions that go wrong far more than they go right. In Paradise Square we’re told there was a time when people lived briefly in a time and place where race mattered less than character, but even the evidence we see of that seems fraught and far from idyllic. So the loss of this brief flash of semi-harmony – what we’re told was a glimpse of the future that has yet to come – doesn’t feel like much of a loss. As a result, Paradise Square doesn’t really feel like much of a show. Not yet anyway.

1 thought on “Aside from dancing, Berkeley Rep Square is far from paradise”