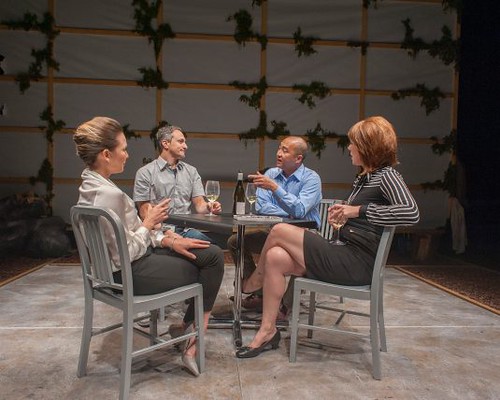 Christopher Chen’s world-premiere play You Mean to Do Me Harm features a cast that includes (from left) Charisse Loriaux as Samantha, James Asher as Ben, Don Castro as Daniel and Lauren English as Lindsey. Below: Loriaux’s Samantha (left) English’s Lindsey go for a hike. Photos by Ken Levin


San Francisco playwright Christopher Chen has brains for days (and days) and a theatrical sense that runs from absurdist comedy to political thriller. He reins in some – not all – of his wildest theatrical impulses for his latest world premiere, You Mean to Do Me Harm, a production of the San Francisco Playhouse’s new play development program known as the Sandbox Series.

There are only four characters in Harm: two married couples, each comprising a Caucasian-American and a Chinese-American partner. That’s important because Chen, in this incisive 80-minute play, is using mixed-race marriage to dive deep into the notion that when it comes right down to it, geopolitical machinations are essentially global manifestations of our personal relationships to others, to our particular life experience and to ourselves. Spoiler alert: that paints a pretty bleak scenario.

The play, performed in the black-box Rueff at ACT’s Strand Theater, begins as a quartet as the two couples meet for a good-natured dinner. The wife of one couple and the husband of the other went to college together and dated, but that’s all in the past (10 whole years ago). That the two characters with history happen to be the white ones is going to turn out to be important. There’s also another reason for the party. It turns out that one of the husbands, who has been unemployed since his wife was promoted and he was laid off at the same company, is now going to be working with the other husband at an up-and-coming search engine called Flashpoint.

The natural conversational rhythms of this dinner party are beautifully conveyed by Chen’s script, with the mix of awkwardness and enthusiasm, the link of nostalgia for the former lovers and the usual quick definition of who we are by what we do. Director Bill English deftly guides his excellent actors into evermore tension, but it’s the kind of tension that begins, as we will hear often in the upcoming scenes, in the subconscious and operates in hidden channels. As one character puts it: “Just because something isn’t said doesn’t mean it isn’t said.” 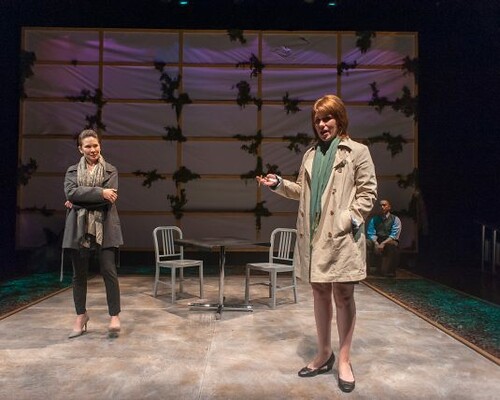 James Asher is Ben, who will soon begin work at Flashpoint in the online content department. He laughingly describes himself as the “white China guy” in that he was hired, in part, for his expertise on all things China (he has lived and worked there, made it the subject of his dissertation, etc.). He will be described later on as a “good balance of being white and being sorry about being white.” Daniel (Don Castro) was born in Shanghai but moved to the U.S. with his family when he was 5. He feels threatened by Ben, perhaps because of the past association with his (Daniel’s) wife but also because Daniel, at heart, thinks Ben is an “armchair Orientalist.”

Daniel’s wife, Lindsey (Lauren English) is in corporate law, and when she is prompted to weigh in on the discussion of China-America relations, she does the kind of geopolitical parsing out “degrees of shittiness” on all sides that would make cable news networks shimmy with delight. But Samantha (Charisse Loriaux), Ben’s wife, wants to challenge that notion and cites a “fairness bias.” Things could get contentious here, but everyone is in a good mood (the wine helps), and everyone is a grown-up, so the conversation grinds, bumps and steadies to the point where everyone raises a glass to the Cold War.

And that’s just the first scene. What follows is a series of duets that break down the racism and micro-aggressions and traps and betrayals of that seemingly benign evening. By fueling his drama with racial and cultural differences, Chen is able to quickly establish the shaky ground underneath most relationships, especially when it comes to being honest, really honest. That two people can live together (to say nothing of being truly honest) seems, at best, an unlikely notion, without some sort of peace treaty: what will be ignored, what will be allowed (or not), what will be forgiven. The depth of anger and insecurity and dishonesty (subconscious or not) that comes up in both of the play’s relationships is astonishing, and the level to which Chen is able to take us in such a short time is remarkable.

At certain points, the naturalism of the play is pushed aside, but it works because there are discussions here that benefit from loosening the bonds of reality. As heavy as this subject matter is, there’s a crackling energy to the production that keeps it from bogging down or slipping into clichés about race or relationships. Chen is too smart for that, and it also helps that no one is a bad guy unless everyone is a bad guy. They’re complicated humans with rich intellect and deep roots. Life is hard for them, and though the play simply stops more than it ends, it seems life will keep getting harder, and the poisons of the world will continue to corrode us personally and politically.

FOR MORE INFORMATION
Christopher Chen’s You Mean to Do Me Harm continues through July 2 in a San Francisco Playhouse production at the Rueff at The Strand Theater, 1127 Market St., San Francisco. Tickets are $20 and up. Call 415-677-9596 or visit www.sfplayhouse.org.