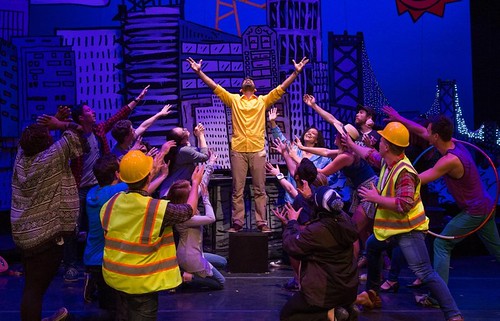 The cast of South of Market: The Musical pays homage to the “humble” engineer as part of its lightheared satire of all things Silicon Valley. Below: The brains behind startup WeWork (from left) Shishir Dash as Anish, Morgan Pate as Delia and Jake Saper as Riley attempt to lure some venture capital funding. Photos by Anna Gavrilov


Having lived in San Francisco for 26 years now, it’s’ sad to say that everything I know about Silicon Valley comes not from firsthand experience of the world outside my doorstep but from the HBO show “Silicon Valley.” Based on that show and on the genial South of Market: The Musical, I would venture to say that the best way to deal with that world is through a satirical lens. My impression is that Silicon Valley life/work is so wacky and self-involved it’s basically satire that writes itself.

The short run of SOMA sold out completely, and at the early show on Saturday, it was packed with Silicon Valley types who ate up every arcane reference and inside joke, all while looking like they should have their own TV shows of the new not-funny-on-purpose sitcom variety. There’s a sense behind this show of smart, scrappy kids who, in the tradition of Mickey and Judy, decided to put on a show in the barn. But this being 21st-century San Francisco, any show anywhere (especially one with a fantastic band and a cast of 19) is a major financial undertaking, and it would seem that some major capital has been expended on this frothy, highly enjoyable venture.

The show is only about 70 minutes, so why not have a warm-up comedian? At Saturday’s early show, Sarah Cooper (www.thecooperreview.com) kicked off the show. Mining gems from her time at Google and making fun of the tech world’s misogyny and racism, she was hilarious and set a nice tone for the show to follow.

What’s fun about South of Market: The Musical (just about everything) is that it’s not set in Mountain View or Cupertino but in the real tech world ground zero: San Francisco. Startup culture is gleefully skewered from the opening number, “South of Market,” where everyone is walking around with their noses in their phones. Quick references to the under-construction Salesforce tower and outrageous rents zip by along with a host of other references, indicating that this is going to be a speedy barrage of quips and call-outs, which turns out be true. 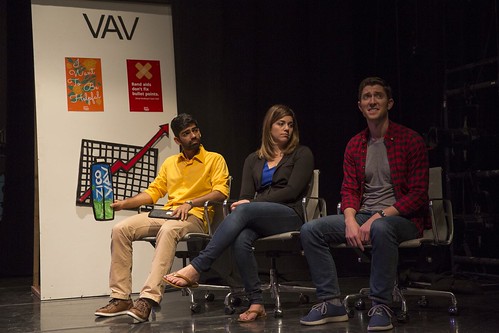 The book by Pat Blute and Sam O’Keefe focuses on a startup called WeWork. What their app does exactly remains a mystery because, as a sign points out, if they had a brilliant idea for an app, they wouldn’t be writing a musical. It seems the protagonist will be Riley (Jake Saper), who is a little too obsessed with landing on the 30 Under 30 list in his waning days as a 29-year-old. His narrow focus on his own success leaves the real work of the startup to Delia (Morgan Pate), the real brains behind the company, and Anish (Shishir Dash), the engineer.

Before Riley spins completely off the tracks, he hauls out every tech cliché and buzzword he can during a VC meeting with Victor (the sublime Rolfe Winkler, who should probably have a show of his own), head of Value-Add Ventures on Sand Hill Road. Victor has money to spend, of course, but what he really wants is to be a nice guy, hence his big number “I Want to Be Helpful,” which features some charming tap dancing (the vivacious choreography is by Lila Green).

It seems appropriate that this whole game – startups doing a song and dance for the funders – should be set to music, and the score here by Tareq Abuissa is appropriately bright and bouncy, a pop/showtune blend with abundant humor. And the aforementioned band is absolutely terrific. Abuissa is on bass and serves as musical director, and though the whole band is terrific, the superstar is violinist Ishtar Hernandez, who lends a distinctive and cheerful sound.

There are also some killer voices here, including Pate (her big number is “Girl Disrupted” backed by all the other women in the show) and Malinda Derouen as Sarah 4.9 Stars, an enterprising woman whose name comes from her average rating on all the service apps she works for like Uber and Door Dash.

Director Christopher Goodwin finds a nice balance between sincerity and satire, character-driven humor and outright silliness. Perhaps not surprisingly his “day” job is performing with Beach Blanket Babylon, and the comic speed of that show and its ability to work in of-the-moment references help make this show all the more carbonated. For instance, there are references to Russians disrupting the American elections and there’s an ensemble performer wearing a “Nasty Woman” T-shirt. Dolores Park plays a major role (its refurbishment, its proliferation of pot products) and the TV show “Stranger Things” gets a nice shout-out (Go Barb!).

The “inside baseball” aspect of SOMA isn’t at all off-putting for someone (like me) ignorant of the tech world. Rather, it lends the show a certain authenticity, like it really knows of what it makes fun, and besides, there are too many good laughs to worry about not getting a reference here and there. Do you need to know specifics to make “You’re lazier than a new Google product launch” funny? Not really. Making fun of Google is just fun.

It’s a shame that South of Market: The Musical had such a short run. But just like that supposedly better-than-Burning-Man event referenced in the show (I had to look it up), SOMA certainly has a further future.

FOR MORE INFORMATION
South of Market: The Musical has concluded its short run, but keep your eye on the official website for its inevitable return: www.somamusical.com.