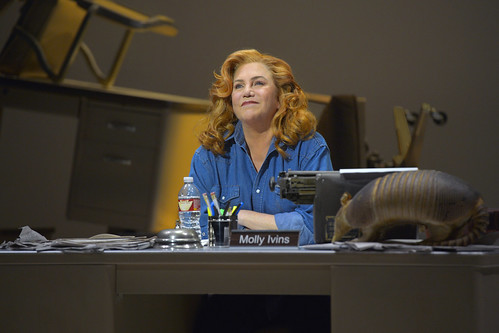 Kathleen Turner stars in Red Hot Patriot: The Kick-Ass Wit of Molly Ivins, a one-woman show about the Texas journalist and satirist Molly Ivins, the woman who coined the nickname “Shrub” for George W. Bush. Photoscourtesy of kevinberne.com


The moral of the story seems to be: if you’re going to kick some political ass, make sure you’re wearing red cowboy boots – and it helps to have a brain, a fire in your belly (fueled, no doubt, by some hooch) and a sense of humor fueled by a larger-than-average intellect.

It seems Molly Ivins had all of the above, at least the Molly we meet in Red Hot Patriot: The Kick-Ass Wit of Molly Ivins now on stage at Berkeley Repertory Theatre’s Roda Theatre (grammatical question seeing as how we’re dealing with a journalist: why the hyphen in the adjectival phrase “kick-ass” describing wit but not in “red hot” describing patriot?).

Ostensibly a one-woman play about Texas’ leading red-haired liberal crusader with a typewriter, the play stars Kathleen Turner as Ivins, and just for theatrical kicks, we have a silent Michael Barrett Austin making occasional appearances to deal with copy coming across the AP teletype machine (an antique with metaphorical significance). Ivins, who died after a fight with breast cancer in 2007, is at her desk (there’s an armadillo on it) trying to write an obituary for her father, whom she calls “The General,” even though he’s not dead yet. She and The General have never seen eye to eye about anything (he’s a Republican, for instance), so the words are not coming easily. But playwriting sisters and journalists Margaret Engel and Allison Engel, working with director David Esbjornson actually have Molly in a sort of netherworld where solo shows can take place without the audience wondering too much why this person is talking to them and why she happens to have a slide show filled with personal photos projected on the back wall. 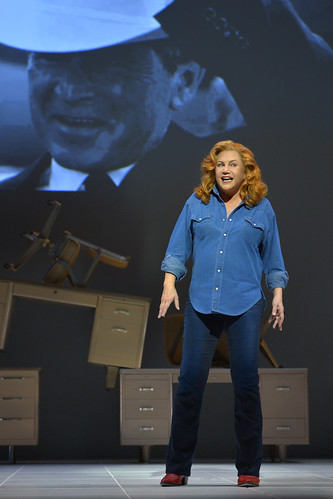 Turner, who is in much better form here than she was last time we saw her on a local stage in the low play High in 2012, is delightful here, all grit and guts and guffaws. Molly is a great character and her humor and activism happen to jibe with Turner’s own, so there’s a very grounded sense of self here that lends an air of authenticity. Turner even looks a little like Ivins, which makes the slide show not as odd as it might be.

Turner’s Ivins essentially takes us through her life as a reporter, columnist and author, all the while sticking it to the establishment and trying (in vain) to alert the world that people with the last name Bush should not be allowed to run the country. There are, of course, many hearty laughs at the expense of Texas politicians but also many pithy observations about the field of journalism itself, a fading art Ivins practiced with her own special genius. I know we’re supposed to come away from this play feeling like we should honor Molly’s memory by getting involved in a cause of some kind, but what I found inspiring was her affection and passion for writing and journalism – that words matter.

Speaking of words, the play itself doesn’t skirt darkness – Molly’s drinking, her cancer, her father – but the play is not edgy. The corners are all rounded for our protection (or Molly’s). Molly isn’t necessarily polite, but the play is. Still, we get a strong sense of her and why her work matters and is worth our attention. Even if the play isn’t quite the raw and raunchy and rebellious drama it could be, it’s a moving memorial to a one-of-a-kind American who was unafraid to be a frickin’ pain in the ass to people in power.

[bonus interview]
I interviewed Kathleen Turner for a story in the San Francisco Chronicle. Read the feature here.