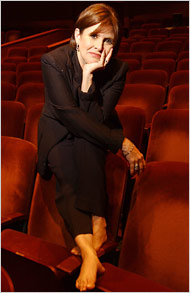 The force is most certainly with her.

Carrie Fisher, fresh from her hit Berkeley Repertory Theatre show Wishful Drinking, a one-woman autobiographical play, is taking the show on the road. And no wonder: in 9 1/2 weeks, the show took in $1.3 million.

Producer Jonathan Reinis is sending Wishful across the country. The first stop isn’t so far away, just down south a little at San Jose Repertory Theatre in July 23-Aug. 2. The next stop is across the country at the Arena Stage at the Lincoln Theatre in Washington, D.C. Sept. 5-28.

Wishful Drinking, a delightful evening of Fisher sipping Coke Zeros and telling tales from her Hollywood life, is directed by Berkeley Rep artistic director Tony Taccone, who recently has been specializing in solo shows. He directed Sarah Jones’ Bridge and Tunnel all the way to Broadway and a special Tony Award.

No one would be at all surprised to see Fisher end up on the Great White Way. In other good Fisher news, word is she’s adapting her most recent wonderful novel, The Best Awful (sort of a sequel to Postcards from the Edge) for HBO.

Since leaving Theatre on the Square (now the Post Street Theatre) in San Francisco, the Berkeley-based Reinis has been a busy man. He’s also touring Jane Anderson’s The Quality of Life starring JoBeth Williams and Laurie Metcalf. That tour opens in October at American Conservatory Theater.

Could this be the future of touring theater — bypassing the commercial stage and taking advantage of the regional theaters’ nonprofit status and subscription audiences?