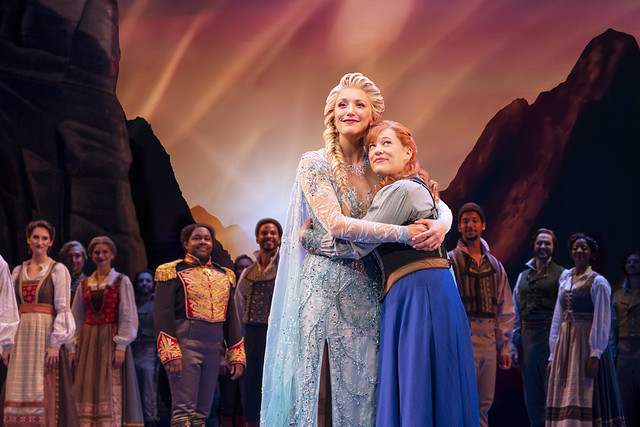 ABOVE: Caroline Bowman (left) is Elsa and Lauren Nicole Chapman is Anna with the company of the North American tour of Disney’s Frozen at the Orpheum Theatre as part of the BroadwaySF season. BELOW: Collin Baja is Sven the reindeer and Jeremy Davis is Olaf the snowman. Photos by Matthew Murphy. © Disney


Frozen on stage is a disappointment. Here you have the No. 1 animated film of all time (according to Disney) with one of the most beloved and omnipresent songs from a movie (animated or otherwise) in decades, and it comes from a multimedia entertainment company that has a history of translating its properties to the Broadway musical stage.

When Disney adapts one of its own, the results can vary wildly, with the better results at one end (The Lion King, Aladdin, Peter and the Starcatcher, which is play with music) and the disasters at the other (Tarzan, The Little Mermaid), and a bunch of pleasant enough work filling the middle (Mary Poppins, Newsies, Aida). On that scale Frozen is not a disaster, but it’s barely entertaining and feels like a missed opportunity.

Director Michael Grandage’s production feels like it wants very much to be a Disney Wicked, with two strong women at the center of a story and the requisite bad guys and love story relegated to the periphery. But this show, which features sisters instead of frenemies, doesn’t do world building nearly as efficiently or effectively as Wicked, and the score, by Kristen Anderson-Lopez and Bobby Lopez has a few high points from the movie (“Let It Go,” of course, “Love Is an Open Door” and “In Summer”) and a whole lot of filler.

The set and costume design by Christopher Oram copies the movie slavishly, and the translation from animation to three dimensions lacks imagination in the way the story does. It’s all so literal and without charm. When Elsa finally unleashes her powers in “Let It Go” and builds an ice palace, there’s a spiffy instant costume change, but the palace itself is something akin to a Swarovski-sponsored Christmas display at Nordstrom. The rest feels very theme park fake with heavy reliance on projections (by Finn Ross trying hard to turn live action back into animation) and icy lighting (by Natasha Katz). 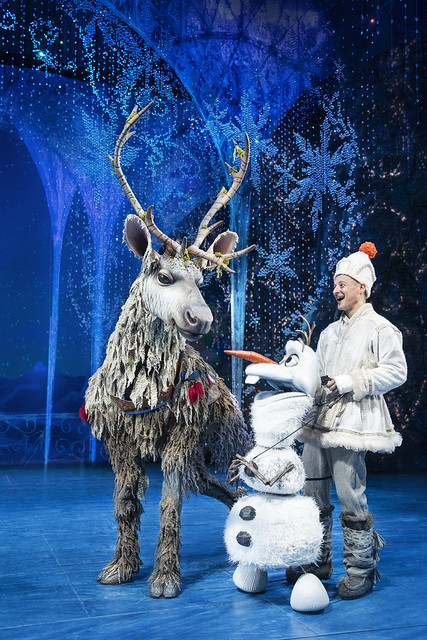 Performances are fine, but there’s not a lot demanded of the actors in terms of complication or subtlety. Voices all have that singing competition belt, and leads Caroline Bowman as Elsa and Lauren Nicole Chapman as Anna do their best to forge a sisterly bond and bridge the tonal gap in Jennifer Lee’s lazy book that shifts quickly from dramatic and dull to contemporary cartoon goofy.

What charm there is in this plodding production comes from Jeremy Davis as the fully visible puppeteer behind Olaf, the magically conjured snowman who likes warm hugs. Designed by Michael Curry (who provided similar services for The Lion King), the puppet has more personality that almost anyone on stage except Sven the reindeer, rendered as a fully costumed character and performed beautifully by Collin Baja and Dan Plehal alternating in the physically demanding role.

Of the humans, the brightest spark on the iceberg comes from Dominic Dorset as Kristoff, whose best song is still the sweetly silly “Reindeer(s) are Better Than People” from the movie, though he does his best with the heavy handed ballad “What Do You Know About Love?”

Even though the creative team has apparently tried to deepen the original story and correct the fact that the movie simply stops being a musical about halfway through, the results are so middling, there can’t be another reason for the show’s existence other than a money grab. There’s not a lot here for adults or musical theater enthusiasts, and for the target audience of kids, there will be moments of delight separated by too many turgid stretches.

There’s only one bit of appropriate advice here, and you probably know what that is. If you’re going to Frozen with an expectation of high-level Disney entertainment, do the opposite of hang on to it.