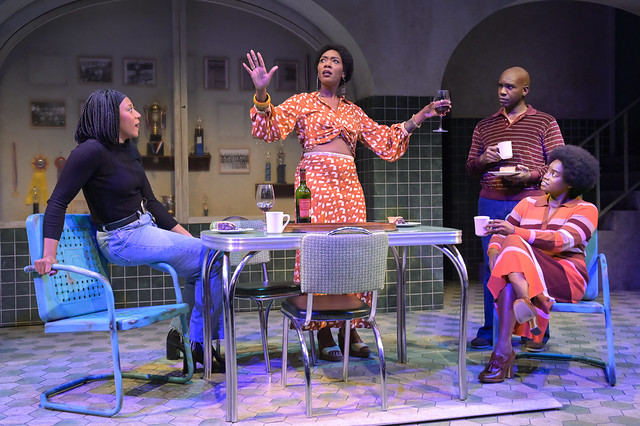 ABOVE: The cast of Berkeley Rep’s world-premiere play the ripple, the wave that carried me home includes (left to right) Christiana Clark as Janice, Brianna Buckley as Gayle, Ronald L. Conner as Edwin and Aneisa J. Hicks as Helen. The play is produced in association with Goodman Theatre. BELOW: Clark’s Janice takes us back to her childhood in Kansas and life with her activist parents. Photos by Kevin Berne/Berkeley Repertory Theatre


In her moving new drama the ripple, the wave that carried me home, playwright Christina Anderson gives us what we want – or, more accurately, what we need – in a family play. She takes us into a very specific time and place, creates distinct personalities, raises a variety of colossal issues and then makes us feel like we’re inside that family in ways that relate to our own family situation.

When that dramatic click happens – when a play begins operating specifically and universally – you know you’re in good theatrical hands.

A world-premiere collaboration between Berkeley Repertory Theatre and Chicago’s Goodman Theatre, the ripple unfolds on the stage of Berkeley Rep’s Peet’s Theatre in what looks like an abandoned public swimming pool. There’s no water in the tank, and chairs are tipped on their side. But there’s still a light on in the awards window.

Much of the story we’re about to hear has to do with swimming and how something so healthy, recreational and fun could turn into a sadly typical American tale of racism, oppression, violence and horror.

By any measure, Janice (Christiana Clark) is a successful adult. It’s 1992, and she’s a department director at a small Ohio university and has a supportive husband and two kids. As the narrator of this story, her story, Janice easily admits that she has compartmentalized her life. Her past and her family all belong in Beacon, Kansas, where she grew up. But a string of insistent messages on her answering machine (oh, the vestiges of 1992) from Young Chipper Ambitious Black Woman calling from Beacon threaten to pull her from one compartment of her life into another, and she resists. 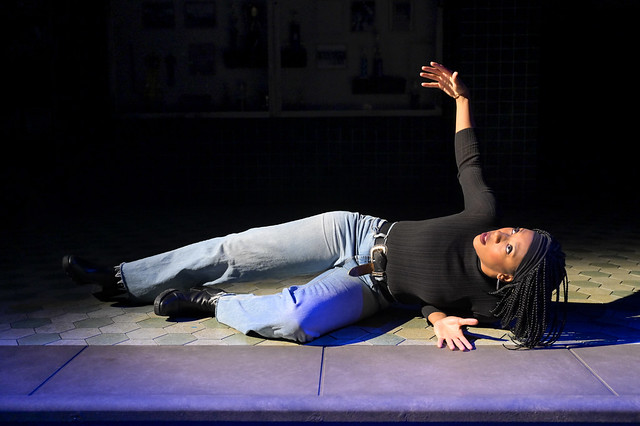 This is when Janice’s story expands. We meet her parents, Edwin (Ronald L. Conner) and Helen (Aneisa J. Hicks) as young people in the late 1950s. She gives free swimming lessons at Brookside, one of three public swimming pools in Beacon but the only one that allows Black people. He gets bussed in from another neighborhood to enjoy the pool, and their lives entwine.

As tragedy rocks the town, Edwin and Helen become activists and begin a years-long battle against the deeply embedded racism of their hometown. Their daughter is born into this fight, and as a teenager, she finds herself embarrassed by her crusading parents (especially her dad) and embarrassed by her very blackness. By the early 1970s we can feel her compartmentalizing begin as she longs to escape to someplace easier and more peaceful.

But things happen both within the family and without that have a profound impact on how Janice will choose to live her life and deal with her parents. When those calls start coming from her hometown, she realizes she can’t just keep being the polite daughter from a distance. Her straight-talking Aunt Gayle (Brianna Buckley, who also plays Young Chipper Ambitious Black Woman) is, in many ways, the ripple that creates the wave that brings Janice home, both physically and metaphorically.

Headed by the warm and eminently relatable Clark as Janice, this strong cast finds humor and drama in equal measure. The family connections feel strong and complex even while the outside world delivers nonstop horror. We see how women labor and suffer in the shadow of men who claim to be focused on issues of equality. We see repeatedly how virulent racism manifests in the lives of this Black family in the Midwest. “Are you new to America?” several characters ask? “Let me show you around.”

Director Jackson Gay unfolds the story at a natural pace, as the swimming pool set by Todd Rosenthal becomes family homes in Kansas and Ohio, a car being pursued by a police car and a fugue state somewhere between nostalgia and trauma.

A generous and empathetic writer, Anderson imbues her characters with depth and complication. Perhaps most importantly she allows for triumph amid the tragedy and for growth and understanding amid hostilities and resentments. Within this ripple turned to wave, she even leaves us swimming in the possibility of joy.