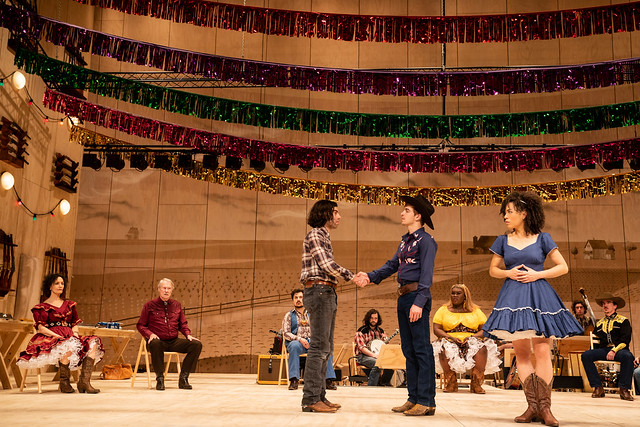 ABOVE: Christopher Bannow (center left) is Jud Fry, Sean Grandillo (center) is Curly and Sasha Hutchings (right) is Laurey in the national tour of Rodgers and Hammerstein’s Oklahoma! BELOW: Hennessy Winkler as Will Parker, Sis as Ado Annie, and the company. Photo credit: Matthew Murphy and Evan Zimmerman for Murphymade


OK, so it’s not exactly a bloodbath, but director Daniel Fish’s bold new take on the classic Rodgers and Hammerstein musical Oklahoma! is definitely gorier than your grandmammy’s memory of this nearly 80-year-old musical. There’s a lot that’s different in Fish’s production – now at the Golden Gate Theatre as part of the BroadwaySF season – and a lot that’s the same. It’s all part of re-thinking how to approach an American classic that allows a contemporary entry point into something we think we already know.

This revival’s original production as an intimate and involving affair, with audience and cast in the same space and cornbread and chili served during intermission. The touring production has to work on a traditional proscenium stage, so we get set designer Laura Jellinek creating a big, bright, wood-covered box filled with wooden picnic tables and folding chairs. There are colorful metallic banners (like at a carnival or used car lot) and guns. Lots and lots of guns in racks.

This is Oklahoma Territory circa 1906. There are some fields and homesteads painted on the wood-paneled walls, but things are pretty austere. The same word could be used to describe Scott Zelinski’s lights, which frequently shine brightly on the audience or, in a moment of passion, wash the stage entirely in green or red. The seven-piece (mostly string) band is on stage as well and scenes fold in on one another without much delineation. Fish doesn’t have time for things like specific locations or set pieces. He and his company are here to strip things down.

There’s nothing lush, plush or flush with sentiment about this Oklahoma!. The score has a lean bluegrass sound, and the voices are, for the most part, smaller and twangier and not that robust musical theater sound (as in the 1955 movie with Shirley Jones and Gordon MacRae). Performances in general are more focused and interior – often more like a play than a musical – and Fish has a trick that he (over)uses when he wants the audience to focus on the dialogue: he turns off all the lights and has the actors speak into handheld microphones. There are also instances of handheld video projections on the big back wall just to remind us that in the 21st century, the cutting edge always involves a screen. 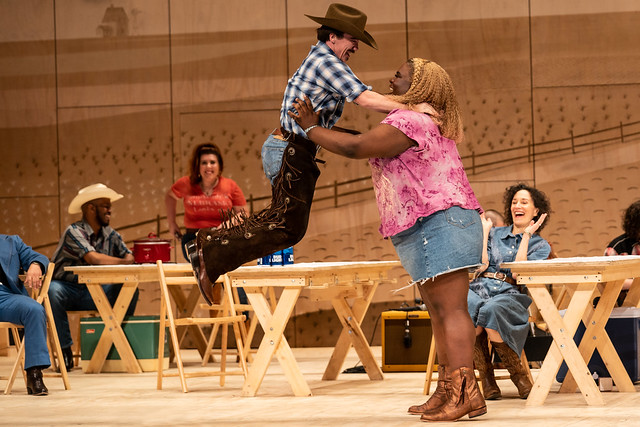 There are lots of Bud Light cans on the picnic tables, abundant ice chests, piles of shucked and unshucked corn on the cob (which is used by the womenfolk to make a mess of the stage – take THAT Little House on the Prairie!) and there are moments that feel much more Green Day’s American Idiot than Rodgers and Hammerstein’s Oklahoma!.

Fish’s theatrical experiments certainly shake things up and make us pay attention, and that attention pays off in several ways that make you want to shout “yeeow-a-yip-i-o-ee ay!” The first is a dazzling Ado Annie from Sis, who is funny, naive, sensual and surprising in equal measure. She cain’t say no, but she also cain’t stop stealing every scene she’s in. Another high point is Sasha Hutchings as Laurey, who is drawn to the dark, outsider energy of hired hand Jud Fry (Christopher Bannow) and to the full-of-himself machismo of cowboy Curly (Sean Grandillo). Hutchings’ voice fully and effectively conveys the character’s ambivalence, longing and, frankly, horniness.

The one major disappointment here is the dream ballet. Originally choreographed by Agnes de Mille, the sequence illuminates the Laurey-Curly-Jud triangle. Here, with athletic choreography by John Heginbotham and wailing electric guitars from the band, dancer Jordan Wynn wears a sparkly, much too wink-wink “Dream Baby Dream” t-shirt and gives us a jittery dream Laurey that fails to connect in any meaningful way.

We tend to think of the end of this musical as the ensemble singing the rousing title song and spelling out the name of a new state. And while that certainly happens, there’s also a death, which in this version involves a gun and a very direct murder (not someone falling on a knife). There’s a bloody, painful cost to progress, this version seems to say, and it comes to those who fall outside the acceptable center. A new American twist on a classic American tale. And it makes you never want to hear, let alone sing, the song “Oklahoma!” ever again. Thematically, that makes sense. But for showtune lovers, that’s not OK.

FOR MORE INFORMATION
Rodgers & Hammerstein’s Oklahoma! continues through Sept. 11 as part of the BroadwaySF season at the Golden Gate Theatre, 1 Taylor St., San Francisco. Tickets are $56-$226. Call 888-746-1799 or visit www.broadwaysf.com.