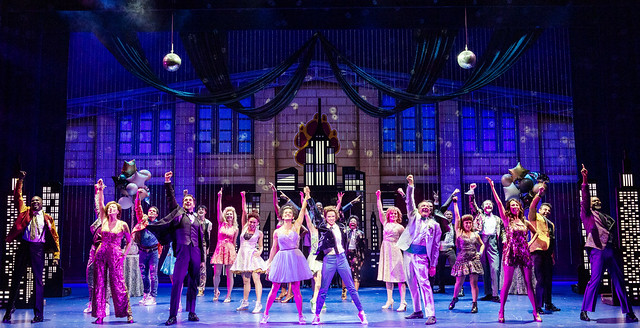 Above: The national touring company of The Prom, a lively musical about a lesbian teen in Indiana, is at the Golden Gate Theatre as part of the BroadwaySF season. Below: Kaden Kearney (left) is Emma and Kalyn West is Alyssa, the couple at the center of controversy in a small Indiana town. Photos by Deen Van Meer


Though Casey Nicholaw isn’t exactly a brand name on Broadway like, he absolutely should be. With shows like The Drowsy Chaperone, Aladdin and The Book of Mormon, Nicholaw is able to combine his talents as a sterling director of musical comedy and as a choreographer who knows how to show off dancers, tell a story and keep the show moving.

The Prom, a 2018 Broadway musical (and a star-studded Netflix movie two years later), proves a marvelous showcase for Nicholaw, who mostly manages the sharp shifts from bouncy, silly comedy to something darker and more rooted in real life. As fun as it is, nobody will ever accuse this frothy work of musical comedy of being a hard-hitting documentary.

The national touring production of The Prom, now at the Golden Gate Theatre as part of the BroadwaySF season, feels like bits of other shows – The Producers, Dear Evan Hansen, Hairspray – mashed together together to tell the story (based on true events) of Emma, a 17-year-old lesbian in a small Indiana town who just wants to take her girlfriend to prom. The local PTA has a conniption fit and cancels the dance altogether before the State’s District Attorney forces them to resume the event.

Book writers Bob Martin and Chad Beguelin (who also wrote the lyrics) smartly dumb things down to recognizable stereotypes that are, in true 21st century fashion, slightly more woke than your parents’ stereotypes. The engine of the plot isn’t the actual discrimination happening in America’s heartland but what a quartet of award-winning Broadway narcissists are going to do about it.

Two-time Tony Award-winner Dee Dee Allen (Courtney Balan) and one-time Drama Desk Award-winner Barry Glickman (Patrick Wetzel) have just been lambasted by New York critics to such a degree that no one will want to work with them again anytime soon. So with the help of a perpetual ensemble member named Angie Dickinson (Emily Borromeo) and a Juilliard-trained waiter/actor named Trent Oliver (Bud Weber), they pick a cause at random to prove that they can think of something or someone other than themselves. They land on Emma’s sad story and hitch a ride to Bumpkinville on a bus-and-truck tour of Godspell to Indiana. 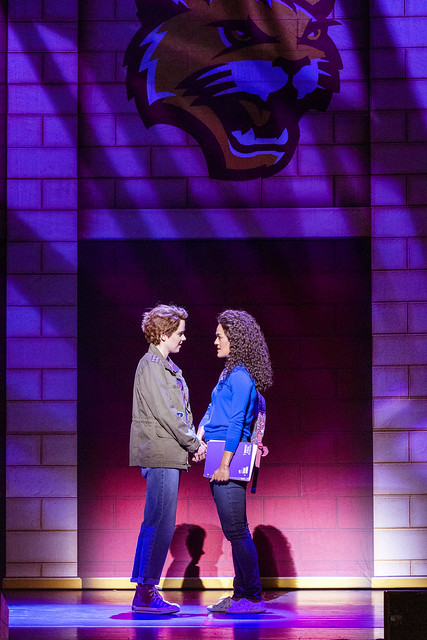 The ego-bashing send-up of Broadway celebrities provides abundant fodder for comedy as the proud (if idiotic) New York liberals clash with the small-town homophobes, who are practically holding pitchforks as they rail against the presence of a young lesbian in their midst.

As long as comedy and sweetness are the prevailing winds, The Prom sails happily. But at the end of Act 1, the whole town, adults and kids, gangs up in Emma in such a cruel, humiliating way that comedy feels uncomfortable. In Act 2, the show never fully regains its buoyancy, mostly because the stereotypes of mean and stupid townsfolk is never really resolved, even though everyone supposedly embraces the joys of diversity and inclusion.

But Act 2 does have the fun faux-Fosse number “Zazz” and the incredibly sweet “Barry’s Going to Prom” (performed with irresistible exuberance by Wetzel). The most memorable songs in the score by Beguelin and composer Matthew Sklar, “Unruly Heart” and “It’s Time to Dance,” help the show end on an upbeat note and spark an incredibly enjoyable curtain call.

The entire cast here is appealing – even the villain, PTA president and helicopter mom Mrs. Greene (Ashanti J’Aria) – and the ensemble, which has to be snooty New York theater patrons, Indiana teens and cruel adults, has an infectious spirit and keeps the stage fizzing and popping with Nicholaw’s vivacious choreography.

Proms in this country have become a rite of passage, but there’s not a lot of depth there (dressing up, drinking, sweaty gym dancing, sex in cars). Still, we take the rites we can get, and if they become a matter of civil rights, perhaps the needle on empathy and acceptance can actually move in a positive direction. The Prom sends show-biz satire and queer rights issues arm in arm to the dance – and truth be told, they have a pretty good time and discover a bump or two of joy along the way.