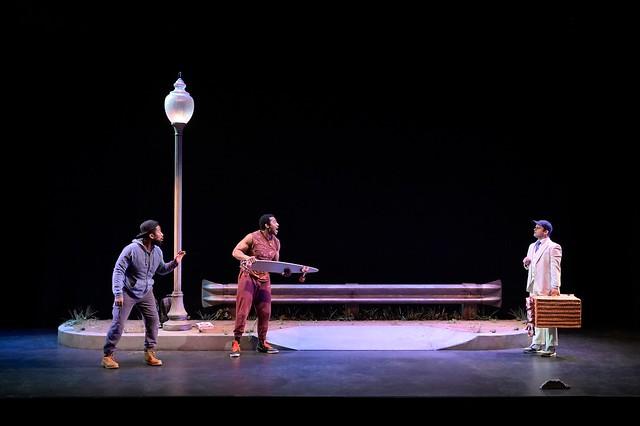 
There are multiple ways to look at Antoinette Chinonye Nwandu’s Pass Over, which is probably why it’s one of the most discussed plays of the last five years.

The play, which has its West Coast premiere at Marin Theatre Company, can be looked at historically. After its Chicago premiere in 2017, the play headed to New York and Lincoln Center with plans for Broadway. Then the pandemic hit, and the country began to roil with protest and calls for change, especially where racial justice and police brutality were concerned. The hope was that as we emerged from a global crisis, that we would also be entering a new era with more focused intent around equality and access. It was into this world that Pass Over became the first play to re-open Broadway.

And then there’s Pass Over in the realm of legacy. Nwandu structures her play much like Samuel Beckett’s Waiting for Godot in which two worn down tramps occupy a wasteland in anticipation of someone coming and something changing. Beckett’s play set the bar for existential exploration – the futility, absurdity, comedy and tragedy of human life – and tested the limits of an audience’s patience for obtuseness and lack of traditional plot. Nwandu also places two men into a wasteland of sorts. This time it’s Moses and Kitch under a streetlamp in some sort of dead-end urban setting. They’re also waiting for something to happen, but their “something” is more specific: they expect they’ll be killed by the police at some point.

It’s a powerful thing to build a contemporary play on a base made of Beckett. There’s a certain familiarity with the lack of specifics and in the sometimes playful, sometimes fearful interaction between the men, but Nwandu charts her own course here. She takes her characters somewhere – keeping in mind one of the characters is named Moses and the Bible, particularly the Book of Exodus, factors largely. Where Nwandu takes this brisk, 85-minute play is spiritual, emotional – even joyful. But because we’re dealing with human beings here, it’s also fraught. Nothing is going to be easy, it seems, and nothing is going to be permanent. Beckett would undoubtedly approve. 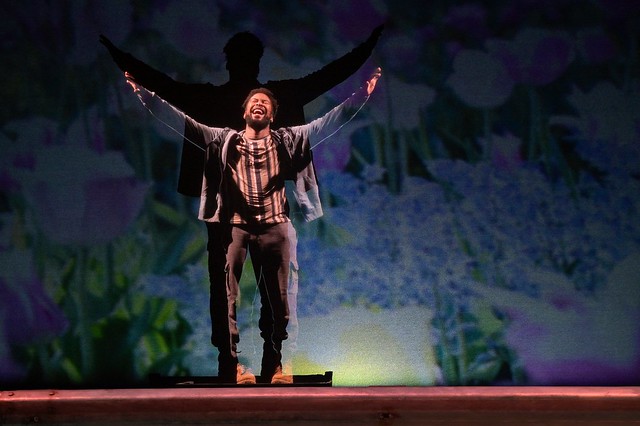 Because Pass Over feels so vital and like a major step for American theater, it’s hard to see it as just a play. Nwandu, like Beckett, purposefully keeps many details out of the play, and as a result, it’s easier for audience members to project their own experiences and impressions into the action, which is infused with, among other things, threat and violence and fear. So viewers who have had their own experiences with racial injustice or being marginalized or being brutalized or feeling stuck or hopeless will have very different reactions than those who haven’t. There’s a reason the creative team includes a drama therapist and compassion consultant.

Director Kevin R. Free delivers a straightforward production that lets Nwandu’s play shine. His actors are stellar: Eddie Ewell is Moses and LeRoy S. Graham III is Kitch. They bear the responsibility of conveying a soul-deep connection to one another through the rhythm of their banter (which includes so many repetitions of “damn, nigger” that it begins to feel like song, poetry and even prayer). They do this effectively and will only get better as the run continues.

Playing dual roles of Mister and Ossifer, Adam A. Roy brings the tension of the racist white world onto Moses and Kitch’s block (depicted with spartan elegance by set designer Edward E. Haynes Jr.). This is where Free’s production could stand to turn up the volume so that the final portion of the play, where power and grace come into the mix, feels like more of a contrast. This final portion also feels hemmed in by being a play in a theater, a weird thing to say about a play in a theater. But if the walls were to come down (partially), and the sky become visible, that would feel like where the play is aiming to go more effectively than lighting changes and projections.

The physical production aside, what lingers after the curtain call is the connection between Ewell and Graham and how for their characters, Moses and Kitch, their push-and-pull connection to each other as friends, as brothers, as leader/follower, takes them into something bigger. They may or may not have escaped the block, but they’ve taken a giant step.