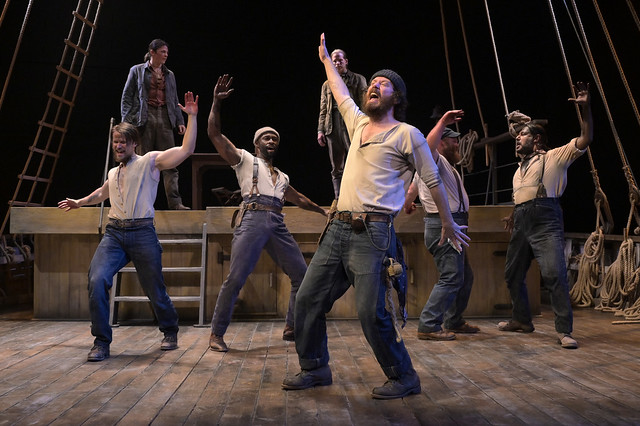 
When you leave a new musical humming the shipwreck, you know there’s a problem.

The first question hovering over Swept Away, the world-premiere musical at Berkeley Repertory Theatre is why everyone behind it thought that, in the 21st century, the American musical theater canon needed an all-male show. Why choose a story that banishes women from the stage and leaves them only to be mentioned as whores in port or dear, sweet Melody Anne back home on the farm. The second is why re-purpose great songs from the Avett Brothers’ impressive catalogue in service of a cliché-ridden story that ends up being about four white guys in a lifeboat.

The impulse to turn songs by Scott and Seth Avett, who have released album after album of rich, melodious music over the last two decades, into some sort of theatrical experience is completely understandable. Their brand of folk-Americana-rock is humorous, dark, beautiful and full of interesting stories. The more than a dozen Avett songs incorporated into Swept Away are not the problem. As long as the men of the cast are singing songs like “Go to Sleep,” “Swept Away” and “Murder in the City,” all is well. The vibrant adaptations of the songs for the stage by Chris Miller and Brian Usifer are rousingly performed by the band under the direction of Julie Wolf and Sean Kana (both credited as music director).

If the performers just sang the songs and didn’t bother with the book by John Logan, Swept Away would be thoroughly enjoyable. Unfortunately, the songs are part of meager story about a late 19th-century whaling ship. There’s a stern captain (Wayne Duvall) who bemoans the loss of his way of life because people don’t need whale oil now that they have paraffin and kerosene. It’s not clear if we’re supposed to feel bad for a guy whose speech basically sounds like, “Damn that kerosene! I want to kill more whales!”

And then there are the neophyte sailors joining the crew. Little Brother (Adrian Blake Enscoe) has run away from his hard life on a hard farm surrounded by hard people. He wants to live life, dammit, not stare at the ass end of a mule. Big Brother (Stark Sands) couldn’t let his little brother run away unsupervised, so the young men set out on an adventure, with Big Brother certain that Little Brother will soon see the error of his ways and come home to family and church (and the aforementioned sweet Melody Anne). 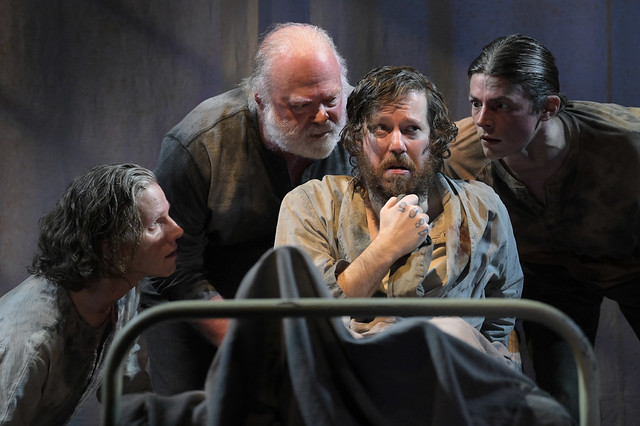 The fourth main character, played by Tony-winner John Gallagher Jr., known only as Mate, represents every hackneyed image of a sailor you can dredge up. He’s seen it all, done it all, killed it all, fucked it all and he’s here to tell you that he’s got a knife and he’s a menace. Gallagher, although an engaging singer, is miscast. He conjures about as much menace as a labradoodle puppy.

While on the ship, the show is buoyed by a terrific ensemble that includes Taurean Everett, Cameron Johnson, Vishal Vaidya and Jacob Keith Watson. They sing, they dance (a bit), they tie ropes. Their shining moment is the shipwreck – a dazzling bit of stagecraft helmed by director Michael Mayer. This stunning moment is a combination of slow-motion choreography by David Neumann, set design by Rachel Hauck, lights by Kevin Adams and sound by Kai Harada. This scene also serves, sadly, as the end of the ensemble.

The action then shifts to a lifeboat and the intense discussions about how the men might survive. Though the whole show is only 90 minutes, the lifeboat section feels like hours. Then there’s a wholly unearned ending filled with salvation for characters who have never felt anything but hollow.

I can only speak for myself here, but I had no interest in any aspect of Logan’s story. That’s hugely disappointing because the Avett Brothers’ songs deserve better. They don’t serve the story well here, and the wearisome story certainly doesn’t support them. You might say it’s all a bit of a shipwreck.