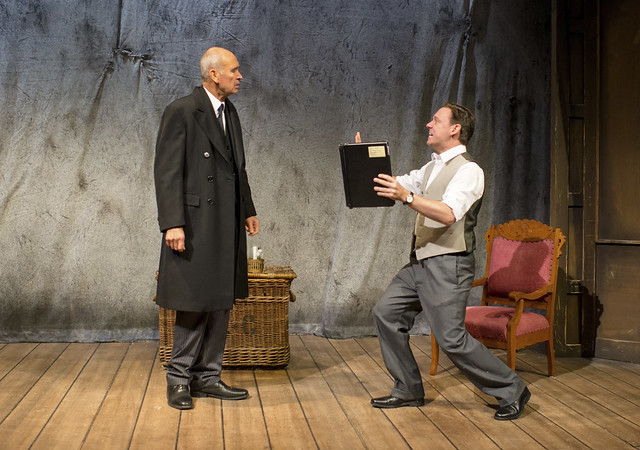 Robin Herford (left) and Antony Eden spin a chilling ghostly tale in The Woman in Black at ACT’s Strand Theater. Below: Eden (front) and Herford explore the grounds of a haunted house in remote England in this stage adaptation of the novel by Susan Hill. Photos by Kasey L. Ross


Nothing like a gothic horror story to bring on all those Christmas feels. But seriously, if this holiday season is feeling like a slow-motion nightmare, have I got a show for you!

Forget A Christmas Carol and all those karma-pushing British ghosts. The Woman in Black is the play for old-fashioned spooky houses, ghostly figures and tragedy-filled back stories. If the title of the show sounds familiar, that’s probably because it’s the second-longest-running play in London’s West End (after Agatha Christie’s The Mousetrap) and there have been several movies based on the same source, the 1983 novel by Susan Hill (the most recent from 2012 with Daniel Radcliffe, Janet McTeer and Ciarán Hinds).

Stephen Mallatratt adapted Hill’s novel for the stage in 1987, and the director of that original production, Robin Herford, is back to direct the touring production now at the Strand Theater and also to co-star with Antony Eden.

The deep 34-year experience that Herford has with this material is quite apparent, both in his precise and expertly paced direction and in his superb performance. He plays Arthur Kipps, a very nervous non-actor who is terrorized by an experience he had many years before. In attempt to exorcise his demons (literal and figurative), he has committed the entire experience to paper and wants to read it from the stage to an audience full of his friends and family. He has hired an actor/director (Eden, whose character is never named) who determines that simply reading Kipps’ tome will take at least five hours. The actor suggests that they adapt the material into a two-man show. The actor will play the younger Kipps, whose London law firm sends him to a remote corner of England to attend the funeral sort through the estate of a longtime client. The real Kipps, who keeps insisting he is not an actor, will play all the other parts. 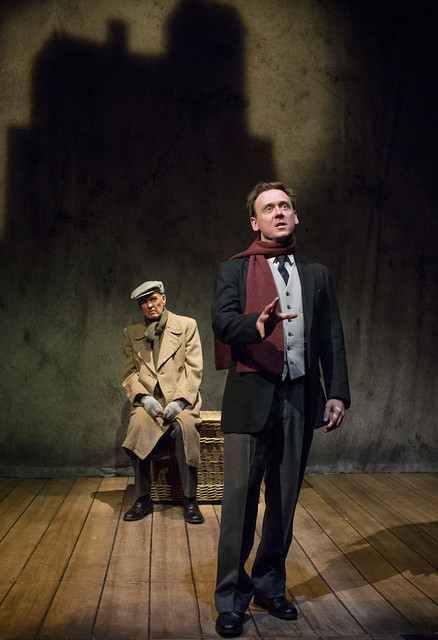 So, it’s an adaptation within an adaptation, which is a tricky way to get us into a theatrical horror story. First we’re engaged intellectually as actors play actors playing parts, but the deeper the actors get into the story, the more engaged we are in the story itself and not the storytelling. By the time the shocks and the chills come, our spooky bone is primed (it’s like the funny bone but more attuned to horror). Even the stage (designed by Michael Holt) begins as a mostly empty stage between productions but eventually introduces more specific locations as we get to know the village of Crythin Gifford (and its graveyard) and the imposing Eel Marsh House (and its graveyard), which is only accessible through the salt marshes at low tide (a warning sign to stay away if ever there was one).

I have found it almost impossible to really scare a live theater audience, but this Woman has some nifty tricks up its sleeve, and a lot of it has to do with skillful work by lighting designer Anshuman Bhatia and sound designer Sebastian Frost (based on the original sound design by Rod Mead). In a situation like this one – with haunted houses, ghostly apparitions and things that make a very loud bump in the night – you’re either game for the chills or you’re a wet blanket. If you play along, The Woman in Black is an awful lot of jittery fun.

Herford and Eden walk that fine line between real drama and melodrama so there’s room for little bursts of humor and a great deal of genuine interest in the unfolding story. Herford plays everything from a freaked-out village lawyer to an enigmatic pony cart driver to a wealthy landowner who doesn’t have time for local lore. And Eden, as Kipps, gives us younger Kenneth Branagh-level earnestness and theatrical panache.

FOR MORE INFORMATION
Susan Hill’s The Woman in Black (adapted for the stage by Stephen Mallatratt) continues through Jan. 16 at the Strand Theater, 1127 Market St., San Francisco. Tickets are $35-$85. Call 415-749-2228 or visit www.act-sf.org/womaninblack.