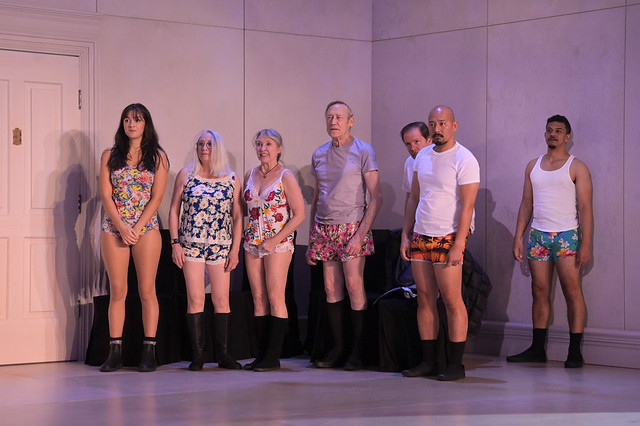 
Oh, the ragged, jagged, chilly, burning season that is Wintertime, the complicated, beautiful, messy play that heralds the live-on-stage return of Berkeley Repertory Theatre after a 20-month pandemic hiatus.

In so many ways, this is the perfect play to bring back this beloved company. First of all, the play itself, by Charles L. Mee is a chaotic, poetic, operatic farce/drama about lovers, friends and family members who have taken each other for granted for too long. What could be an idyllic post-Christmas, pre-New Year’s few days at a snow-covered country home turns into a rage-filled, poignant and occasionally hilarious explosion – like a snow globe has been smashed, and amid the dripping snow bits and wreckage and broken glass, there are humans struggling to find shards of hope, love and forgiveness.

Mee is a Berkeley Rep favorite, with his Big Love and Fête de la Nuit being two highlights of the theater’s production history. Both of those shows were directed by Berkeley Rep’s former associate artistic director, Les Waters, who also directs Wintertime. There’s likely not a director around who can more effectively bring out the raw humanity and sheer beauty in Mee’s fascinating collage of a script.

Then there’s the cast, which includes some of the Bay Area faces you would most wish to see after having been banished from the theater for a year and a half. Most poignantly, James Carpenter is Frank, a married man whose wife holds a prominent place in his heart and his life even though he’s mostly with his lover, Edmund (David Ryan Smith). This is a role Carpenter played 18 years ago at the now-departed San Jose Repertory Theatre, and if he was good then (he was), he’s magnificent now. As someone who has been expected to be solid all his life, Frank is fragile and so very sad. Contemplating the relationship with his wife, Maria (Nora el Samahy), Frank says when he wakes in the morning, “I can’t decide whether I most want to hurt you or give you something.”

Other local stalwarts in the cast include the great Sharon Lockwood and Lorri Holt as Hilda and Bertha, the interfering couple next door, and the gorgeous stage is designed by Annie Smart, whose set brings the winter woods indoors by hanging dozens of silver tinsel garlands from the rafters and gives us one window through which we see a never-ending snowfall. The winter light comes from designer Russell H. Champa, and it’s all appropriately cold until tempers flare and we get flashes of red and changing hints of color around door and window frames. 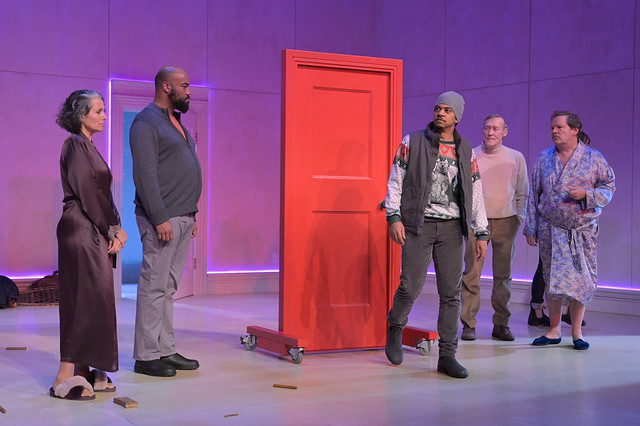 The humans within this wintry arena speak in poetic arias like characters out of Shakespeare or Chekhov who behave like the only thing that matters is themselves and their feelings. This means Act One of this 2 1/2-hour play is a near-constant eruption of jealousy, betrayal and hurt. The act’s final scenes offer two showstoppers: one involves a much-slammed red door that becomes the centerpiece of a wounded ego/broken heart ballet and the other turns the stage into the physical embodiment of all those emotions with the kind of mess you don’t envy the stagehands having to clean up.

Through it all, Jake Rodriguez’s sound design keeps pumping loud, heavy music full of voice and orchestra. There are some lighter moments – Silk Sonic makes a welcome audio appearance – and Act Two, with mortality leveling out some of the egos and tormented love stories, features some emotional depth that brings young love back to earth and gives older love reason to hope. And the entire cast ends up dancing around in beautiful underwear (costumes by Anna Oliver because sometimes joy mixed with loud music, dancing and underwear is absolutely necessary.

The marvelous cast, under Waters’ astute, no-nonsense direction, also includes Thomas Jay Ryan as a French lover who (maybe) sees his ribald life a little differently by play’s end, the hilarious but deadpan Jomar Tagatac as a delivery guy/minister who brightens every scene he graces and Carmen Berkeley and Micha Peoples as the young lovers whose shallow sense of the romantic evolves into something much different.

Mee’s dialogue can soar, it can annoy and it can dazzle. He cares about his characters’ dreams and he has compassion for their abundant faults. Then there’s the odd line that makes you take a mental note to write into the script of your actual life: “You were born grouchy; you live in a snit; and you will die in a huff.”

The trick of Wintertime is that it seems like it will be a cozy, romantic canoodle by a roaring fire, but the reality is that this play is, for all its glorious theatricality, jagged, sharp-edged and emotionally authentic – more bitter than sweet, more vodka rocks than hot cocoa.

The play is a carnival mirror, broken as that mirror may be, and there’s much to see (and feel) in it from the perspective of this strange period in which we find ourselves. During a Viking feast, a toast is offered to the assembled, but it might as well be to all of us as we move slowly out of one terrifying era and into…whatever comes next:

to the end of squabbling
the end of jealousy
the end of suspicions
to the new times of gratitude
for what we have.