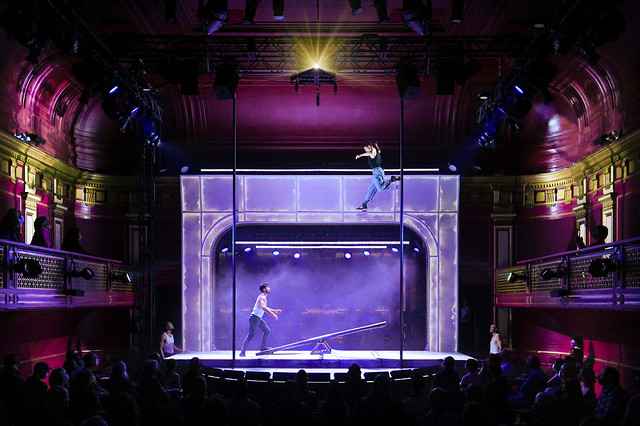 
If it were possible to actually see the heart of San Francisco, it might look like the beautifully diverse group of awe-inspiring acrobats bouncing around the stage in Dear San Francisco: A High-Flying Love Story. And this is not just any stage: this is Club Fugazi, the storied North Beach theater built in 1913 where Beach Blanket Babylon ran for most of its nearly five-decade run.

That’s a tough act to follow, but you know what? COVID is even tougher. And the glorious artists behind this enterprise rise to the challenge and then some. As Bay Area theater slowly begins to wake up from its 18-month imposed nap, it’s positively bracing to be in the presence of not only the wonderful performers of Dear San Francisco but also the loving, funny, thrilling show itself.

Co-conceived, created and directed by Shana Carroll and Gypsy Snider for their company, The 7 Fingers, this is a circus show that aims to share what’s lovable, what’s quirky and what’s annoying about San Francisco. Such a show could run for six hours at least, but this one runs around 90 minutes, and, happily, it doesn’t get hung up on SF stereotypes or get too sappy or silly about what makes this place unique. It takes an open-hearted approach and embraces these 7×7 miles by creating a portrait of a city that feels as wonderful and exciting as it feels unknowable. This isn’t a schmaltzy show built for tourists, but any living, breathing human (tourist or not) would be inclined to enjoy it and its robust portrait of the City by the Bay.

Carroll and Snider come to the world of the modern circus through San Francisco’s own chapter of circus renown, specifically through the Pickle Family Circus (Carroll was a trapeze artist and Snider’s parents founded the Pickles when she was 4). We tend to think of modern circus in terms of Cirque de Soleil, but I have to admit a certain weariness for that empty corporate spectacle. Give me a pulsing, human troupe like The 7 Fingers any day, and in addition to reveling in the performers’ skills, I’ll also enjoy their camaraderie, the light in their eyes and the magic they can create with their bodies and very little else. 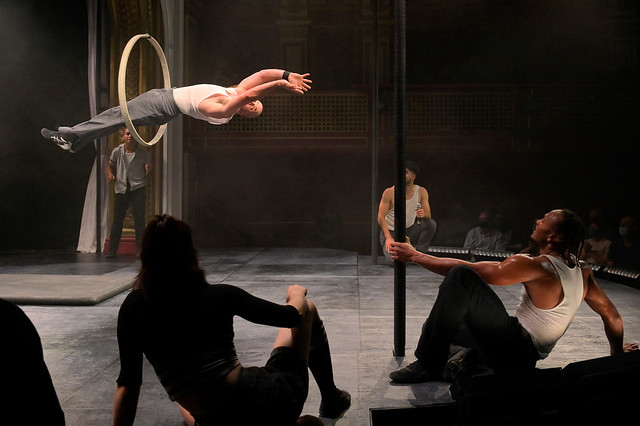 The nine-person cast is charming, sexy, funny and gobsmacking. If you’ve ever been to Fugazi, you know it’s not a very big theater. How Beach Blanket managed to get those giant props and hats onto that small stage is one of the wonders of the world. And 7 Fingers goes even further toward making this an intimate experience by putting audience members on the stage. Those folks almost end up with acrobats in their laps several times, but it’s hard to imagine anyone complaining.

There’s a poetic fluidity to the sequence of events, and the acrobatic acts themselves are woven into captivating vignettes about, for instance, falling in love in Golden Gate Park (which involves a trapeze and, apparently, a deal with gravity to take some time off). Or there’s the unicyclist who seems to be dancing and taking over the city on one wheel. It’s aggressive and beautiful at the same time (and the effect often appears more like rollerskating than unicycle riding).

Diving through a twirling hoop is set against recitations from the Beat poets, and the magnitude of an earthquake is measured by two men on a teeterboard (and it is seismic). Even Sam Spade and an enigmatic, truth-challenged client get in on the act with white balls (sort of like smaller volleyballs) that allow for a startling blend of film noir and juggling.

Tech folks get a mild skewering in a bit called “Privatize This,” and a hand balancing act becomes poetry in motion involving the beauty of redemption. My favorite act – the one that literally made me hold my breath – takes place on the stage-to-ceiling poles with a level of strength and control that is mind boggling.

Dear San Francisco really is a high-flying love story. There are people in love mixed into its portrait of a beautiful city, but it’s really a love story between us and the city itself. At one point, performers read postcards written by audience members (and some famous folk), and at Tuesday’s opening-night performance, one postcard said something to the effect of, “San Francisco, you have broken my heart and filled it over and over again,” which makes this place almost impossible to quit. How do you capture a historic city in flux? With a pile of irresistible acrobat performers, that’s how. This living, breathing love letter of a show finds joy in every leap, razzle-dazzle in every flip and absolute joy in every moment.

3 thoughts on “A joyful circus bounces into Club Fugazi”