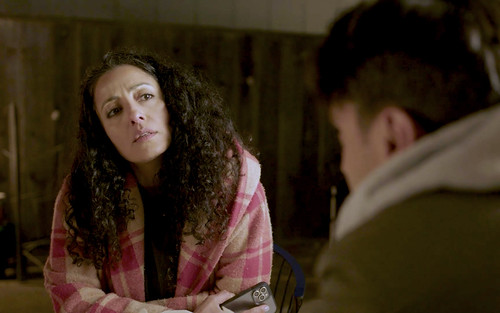 Denmo Ibrahim as Dina and Ramiz Monsef as Yusef in Marin Theatre Company and Storykrapht’s live and interactive premiere of Brilliant Mind by Denmo Ibrahim. Below: Dina and Yusef deal with the aftermath of their father’s death.


Samir El Musri texted me more than two dozen times the other night while I was watching an online play. Rather than tell Samir to stop bothering me while I was otherwise engaged, I eagerly awaited each short message or photograph.

Samir, you see, is not a real person. He’s a character in Denmo Ibrahim’s world-premiere show Brilliant Mind, a presentation from Marin Theatre Company and Storykrapht that revels in the digital realm rather than treats it like a stopgap until theaters reopen.

Before the 80-minute show begins, we’re invited to explore a virtual 3-D replica of Samir’s apartment in which there are a number of items that will trigger additional information. We’re also invited to allow Samir to text us and to put his name in our address book so the texts actually come from Samir (and heightens the reality of the experience).

Unlike many digital plays, Brilliant Mind begins at a proscribed time because, as it turns out, there’s a live aspect in addition to the interactivity, and that live aspect involves Samir himself (as played by Kal Naga aka Khaled Abol Naga, who has died this very day and exists in a sort of limbo while he observes his grown children, Yusef (Ramiz Monsef) and Dina (Ibrahim) sort through what he has left behind – physically, culturally, emotionally.

Dramatically speaking, this live aspect combined with previously filmed segments involving Ysef and Dina, could be gimmicky at best and technologically glitchy at worst. Happily, Ibrahim, working with director Kate Bergstrom and digital/interactive designer Marti Wigder Grimminck, folds this idea meaningfully into the narrative, making Samir an observer – as we are – of the unfolding action and giving him a touch of magic realism in that he is able to use his phone to text us (his fellow observers) and make his presence felt in the world his children occupy. 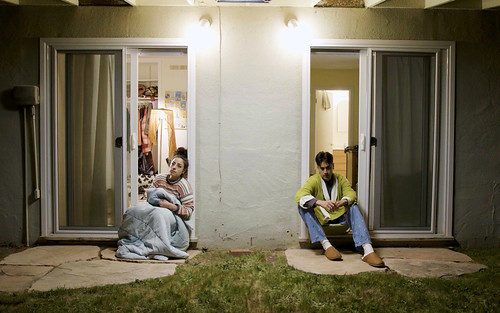 Yet another interactive component allows viewers to choose the play’s path at certain moments, which frankly made me a little anxious because of I have FOMO and am always certain I choose the less interesting option (and if you don’t choose rather quickly, the system chooses for you, so there’s that).

All the technology aside, the story of Brilliant Mind is intriguing in its own right as it explores the lives of Yusef and Dina, first-generation Arab-Americans, and how their lives have been (are being) affected by the lives of their immigrant parents and how a family forms its identity through cultural roots, geography, secrets and the politics of history (and the history of politics).

Ibrahim has long been a Bay Area actor of note, someone to rely on for depth, intelligence and emotional realism on stage. She and Monsef are marvelous together as their scenes crackle with the fraught chemistry of siblings who want to do better by one another but mostly fail to rise to that challenge. This period following their father’s death is sort of an emotional crucible, which is, of course, an excellent time to check with them from a dramatic point of view.

The richness of the characters and the bells and whistles of the presentation can’t conceal certain lags in the script (which would probably be more effective on stage than on screen) and a reliance on clichés (especially for Samir), but it’s all so well acted and produced that there’s still a great deal to enjoy, savor and ponder.