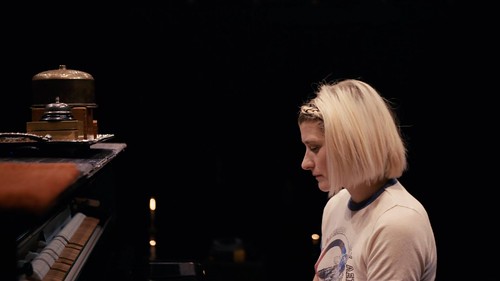 Composer/performer Heather Christian stars in the original streaming film adaptation of the Bushwick Starr’s production of Animal Wisdom. Below:Christian and her cast/band connect with another realm.


In the last year, we’ve seen some splendid streamers and some snoozy streamers. We’ve seen filmed productions that get an A for effort (and that’s about it) and Zoom productions that somehow transcend those little boxes. Theater just hasn’t been theater for a while, and we’ve done the best we could, as audiences, as performers, as producers, to keep the spirit alive as best we could.

Then along comes something like Animal Wisdom, a filmed version of Heather Christian’s Bushwick Starr theater experience from the 2017/2018 season. This concert/play/séance/requiem, originally directed for the stage by Emilyn Kowaleski and now filmed by Amber McGinnis, emerges as one of the most searing and satisfying of our pandemic entertainments.

Filmed in March 2021 at Wooly Mammoth in Washington, D.C., and presented by Wooly Mammoth and American Conservatory Theater, Animal Wisdom is, as Christian puts it, “something else.” It’s not theater, it’s not a TV show. It’s in between (like some spirits), and her unique spin involves interactivity (you stand, you sit, you hum). Early on in the two-hour show, she stops the action and sends you on a scavenger hunt around your house. The things you collect will help create a “ritual space” because this is a show about the dead.

Since she was a child in Natchez, Mississippi, Christian has been able to see and communicate with ghosts. Animal Wisdom is about putting some of those ghosts to rest, and so she creates and performs an unusual requiem mass that involves some glorious music that contains everything from folk to rock to pop to gospel to punch-you-in-the-heart communion with…well, with something. 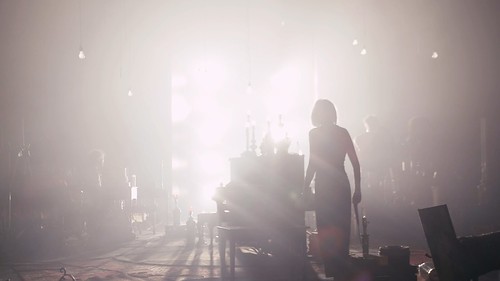 Christian is our primary focus, but her fantastic band also gets in on the act playing various people – living and dead – in Christian’s life. Sasha Brown, Eric Farber, B.E. Farrow and Maya Sharpe make glorious music and match Christian’s remarkable energy. McGinnis’ filmmaking also powerfully captures the dynamic moods of the show, whether it’s a manic burst of energy that sends actors racing around the theater or a meditative moment on stag in near darkness.

You don’t have to believe in ghosts to enjoy this tale, though Christian is such an effective storyteller/singer that she could likely sway a skeptic into wondering how many of their own dead they brought to witness this show. Believer or not, there’s a lot of emotion packed into this show, and that’s what cuts through the screen and slices right into your guts. The music is a big part of that – especially when waves of choral voices wash through – and though you can imagine how incredible it might be to participate in Animal Wisdom live and in person alongside other flesh-and-bone folks as well as the spirit guests, the show is a powerhouse onscreen. Sometimes the medium is the message.


FOR MORE INFORMATION
Tickets for Animal Wisdom are available at three pay-what-you-wish prices: $19, $29 and $49. The show streams on Broadway on Demand through Sunday, June 13. Visit www.animalwisdomfilm.com