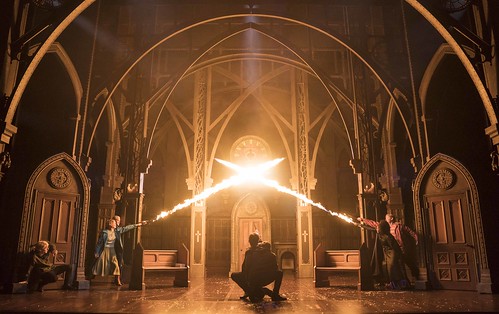 With productions in London and New York, the two-part epic Harry Potter and the Cursed Child has opened in San Francisco at the Curran Theatre. The story, focusing on the next generation of magical offspring, was created with J.K. Rowling, playwright Jack Thorne and director John Tiffany. Photos by Matthew Murphy


Harry Potter, known as “the boy who lived,” has continuously found life on the pages of seven best-selling novels, on the screen in eight blockbuster films, in theme parks both in Florida and California and now on stage in an epic two-part, five-plus-hour play that has to be seen to be believed.

With successful productions of Harry Potter and the Cursed Child running in London and New York, the wizard’s theatrical reach has extended to the Curran Theater in San Francisco, where it will undoubtedly run for years to come. Otherwise, why would theater management have gone to the trouble of decking out the building with Harry Potter-themed carpeting?

The smartest thing Potter author J.K. Rowling did when considering an adaptation of her characters to the stage was to connect with director John Tiffany, whose work in shows like Once and Black Watch was incredibly dazzling without being overwhelming because he never loses sight of human scale and emotion within the spectacle.

Rowling, along with Tiffany and playwright Jack Thorne provide the eighth chapter of the Potter saga by jumping ahead 19 years after the action of the final Potter book, Harry Potter and the Deathly Hallows. So the story is really about the next generation of young wizards – and how they’ve either been encouraged or messed up by the previous generation. In other words, it’s about the inexorable passage of time. But because this is a magical world, there’s no guarantee that time will move in anything resembling a linear fashion. 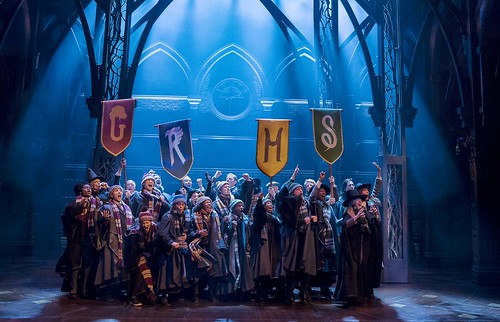 So with a story about parents and children, or fathers and sons to be more specific, Rowling, Thorne and Tiffany pull out all the stops in the creation of an absolutely dazzling, exhilarating, gob-smacking theatrical experience. The less you know about it the better, but know that in addition to Harry, Hermione and Ron, you’ll see a number of characters from the Potter-verse, some beloved, some not so much. It helps to have some knowledge of Potter lore – if you know who Voldemort is (or was), you’re doing pretty well – although this new story is specific enough and provides enough exposition to sustain interest for those who don’t know a horcrux from a Hufflepuff.

Could this story have been told in a four-hour show? Probably, but there’s something very satisfying about settling in for the long haul, and the protracted length allows for more dazzling special effects and tricks and mind-boggling theatricality than you can possibly imagine. Tiffany’s whole design team has done remarkable work here, but to my mind, the two stars are Jamie Harrison, credited with illusions and magic, and lighting designer Neil Austin, whose razor-sharp works allows those illusions to work in such beguiling ways. Of course, Christine Jones’ set and Katrina Lindsay’s costumes are part of the trickery as well, but also a huge part of the beauty. This is a stunning show in every way from beginning to end – it’s almost like you can’t watch it hard enough for fear of missing something. There are images in these plays that are among the most strikingly beautiful I have ever seen in a theater. 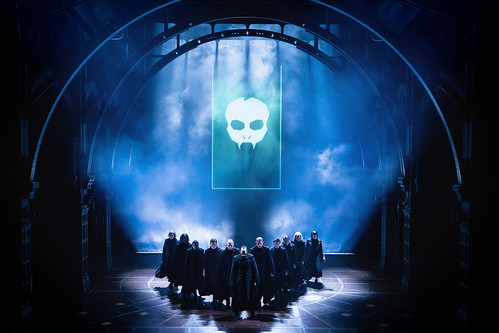 The less said about the plot the better because there’s so much joy of discovery and surprise in this tale of acceptance and honesty (it’s not exactly The Iceman Cometh, but it’s got some emotional heft). Tiffany’s cast is reliably sturdy to deliver the laughs and the deeper emotional moments, and that very Rowling-esque sense of story propulsion is felt throughout, especially when the larger group bonds together to fight a common enemy. The friendship between Albus Severus Potter (played by Benjamin Papac) and Scorpius Malfoy (Jon Steiger is especially potent, and both actors bring a welcome angsty teen edginess to their performances.

The interesting thing about Cursed Child as the eighth Potter story is that it feels organic and heartfelt in a way the Fantastic Beast prequel movies have not. Those feel like a money grab overloaded with CGI effects. These plays are filled with storytelling, right-before-your-eyes magic and good, old-fashioned theatrical dazzle. These plays are proof that there is real magic in the world, and it resides – perhaps not surprisingly – in the realm of live theater.