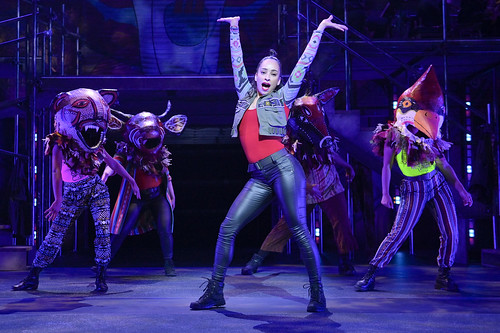 
After 33 years at Berkeley Repertory Theatre – 22 as artistic director – Tony Taccone is taking a final bow with Kiss My Aztec, a world-premiere musical that serves as a fitting farewell. Hatched from the fervid mind of John Leguizamo, the show hits a lot of Taccone hot spots. It attempts to stick it to the white man (in this case, the Spanish conquistadors who colonized, destroyed and attempted to erase Aztec civilization) while re-writing history with a focus on those who should have had a hand in recording it in the first place. It’s a sprawling, inclusive, celebratory explosion of energy that continually lobs truth bombs at its audience through crude, incisive, often hilarious lines and lyrics.

“The original sin of the nation you’re in is white people in boats.” That’s from the rousing opening number performed by an ass-kicking 11-member ensemble. The choreography by Maija Garcìa immediately lets us know we’re in for a show where everything goes. Urban, modern, traditional, Latinx – it’s all here, and it’s all exciting. Set designer Clint Ramos (who also designed the costumes) largely gets out of the way of the story by letting his actors climb on, around and under a basic two-level scaffolding structure surrounded by brick walls covered in colorful murals.

Based on a screenplay by Leguizamo and Stephen Chbosky, Kiss My Aztec is an imagined tale of Aztec revenge. In the book by Leguizamo and Taccone, it’s the mid-16th century, where people speak with a hint of Shakespeare along the lines of, “Thou shall shuteth thy pie hole.” Though Cortes has successfully vanquished, pillaged and enslaved the Aztec civilization, a small tribe plots revenge on the Spanish ruler. In this version of history, the Aztecs are successful and very much part of the ongoing and successful effort to make the world more brown. 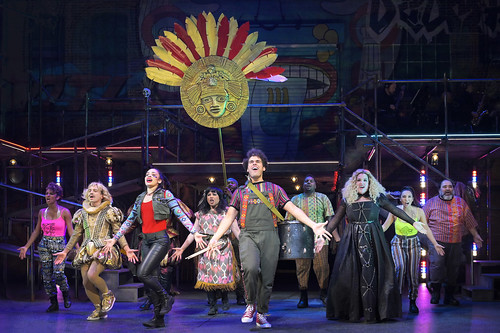 This historical revision happens with the kind of musical irreverence you might find in shows like Monty Python’s Spamalot or The Book of Mormon. There’s a lot of slicing and sassing of the patriarchal conquerors, but there’s also a lot of love for the downtrodden and the wronged. The score, with music by Benjamin Velez and lyrics by Leguizamo, Velez and David Kamp, is all over the musical map. There’s rap and hip-hop, Broadway love song (albeit performed by lovers who are chained up and just out of each other’s reach), samba, tango, gospel and just about anything else you can think of. In spite of, or perhaps because of, that variety, the score is eminently enjoyable. There’s a song late in Act 1, “The Abstinence Song,” that is perhaps the catchiest, with its refrain of, “Keep it in your pants and dance.” And the aforementioned love song, with the chains inspiring the lovers to sing “just a few inches more,” is cleverly titled “Chained Melody” (sure to be a hit for the Unrighteous Brothers). The only song that didn’t fully work for me was the Act 2 opener, “Dark Meat,” which is funny for a verse and then tiresome.

The central characters here are Aztecs Columbina (Yani Marin) and Pepe (Joél Pérez). She’s a warrior trapped by her father’s limited idea of what women can do, and he’s a gentle soul who would rather practice sock puppetry than pick up a sword. They’re destined for each other, but first they have to prove themselves by infiltrating the Spanish citadel, capturing the viceroy’s giant ruby pendant (that and a blood moon figure largely in a prophecy) and guiding the Aztecs to victory. Columbina’s big double-negative statement of defiance is “Don’t Tell Me What I Can’t Do,” and Pepe’s is the charming “Punk-Ass Geek-A.” They both get to be heroes, but it’s clear that Pepe is the most Leguizamo-like, a rolling ball of comic electricity and eccentricity whose charms are impossible to resist.

Within the Spanish court, the viceroy Roderigo (Al Rodrigo) is miserable. He loathes his gay son, Fernando (Zachary Infante), who is secretly in love with a Catholic priest, Reymundo (Chad Carstarphen), decked out in his Inquisition-red robes. Their down low duet, “Tango in the Closet,” is a hoot.

Many performers are double cast in fun ways. Carstarphen, for instance, is the gay priest and also the noble but beleaguered El Jaguar Negro, leader of the Aztec resistance. And Infante makes a second appearance as a Sebastian, a wacky bit of inbred Spaniard royalty with his own fizzy dance club number, “New Girl, New World.” Desiree Rodriguez also makes a strong double impression as an Aztec and as Pilar, daughter of the Viceroy who wants to mess with her father in a big way.

This is the kind of highly carbonated musical that makes audiences happy – makes them feel smart and entertained and progressive – and it looks like a joy to perform. This production heads to the La Jolla Playhouse this fall, and who knows where beyond that. It’s not a revolutionary show, but it’s part of a class of musical comedy that’s actually funny as well as heartfelt, relevant and full of catchy tunes. There’s a fair amount of snark and cynicism in the show’s humor, mostly to underscore the idiocy of our current political climate, especially in respect to brown people here, there and everywhere. But ultimately, this is a big, juicy Kiss that inspires celebration and hope, even amid oppression, darkness and abominable leadership.