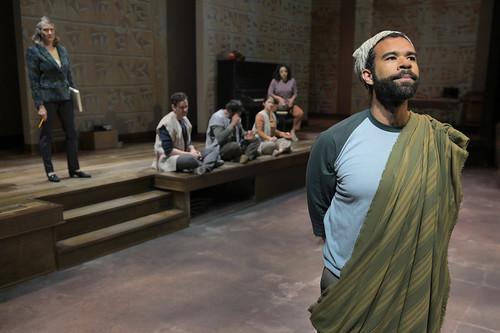 
Let’s just admit it. The Bible is a clusterf**k. How in the world did such a literary hodgepodge, political football, myth collection become one of the most influential – if not the most influential book – ever created? That is the mammoth question playwrights Lisa Peterson and Denis O’Hare ask in their fascinating play The Good Book now at Berkeley Repertory Theatre. Their focus here really isn’t Christianity or even religion in the larger sense but rather how the Bible evolved over centuries into what we know it to be today: a confusing, contradictory, occasionally beautiful piñata poked at by people around the globe who want everything from solace to spiritual connection to straight up power.

How Peterson, Berkeley Rep’s associate director, and O’Hare (a Tony-winning actor best known lately for his TV work on “American Horror Story” and “This Is Us”) go about answering the question of what the Bible really is takes nearly three hours and a play that careens all through time and space in a most entertaining manner. They gather their seven remarkable actors amid the detritus of Rachel Hauck’s set – mostly overturned tables and chairs – and begin to create order. Then they begin what feels like a Bible 101 class, with Annette O’Toole taking the lead, as they all ponder the questions: what is the Bible (what is it really apart from all the baggage piled on top of it) and where the hell did it really come from?

The college seminar idea, as it turns out, isn’t far off. As the play comes into focus, O’Toole emerges as Miriam Lewis, a renowned Bible scholar and professor who, it should be noted, does not believe in God. The free-form nature of the play allows us to be in Miriam’s classroom and to bounce back centuries as we experience great moments in the creation of the Bible. Well, maybe not so great. Just moments. Like when a group of travelers, who have done their best to record the stories of their people and Jesus and Jesus’ wife on various scrolls, discover that a member of their band has discarded some of the most important scrolls so that he might collect figs to nourish them on their journey. B’bye, Jesus’ wife.

The other thread of the story involves a boy named Connor (Keith Nobbs), who is being raised Catholic and has become a “Biblehead,” someone obsessed with the Bible. He has an old-fashioned cassette recorder and, in addition to capturing the details of his life, he pretends to interview important figures from the Bible and the Bible’s history (King James even shows up). All of that biblical fascination adds layers of complication as he grows up and realizes he’s gay. He then struggles to hide that fact from his parents and his God until he rejects the church (even if temporarily) to figure out how to discover a loving deity instead of a hateful one. 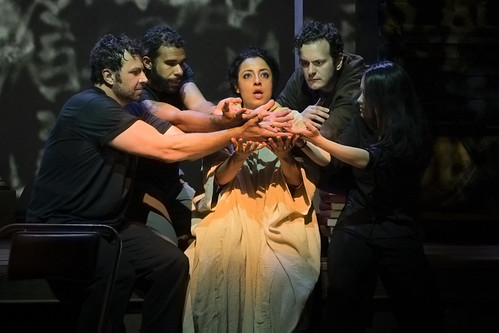 The motor at the heart of the play is O’Toole as Miriam. She’s smart, sarcastic and unafraid to put you in your place because she knows more than you do. In one of the play’s more contrived constructs, Miriam is the subject of a New Yorker article about the “new atheists,” and the reporter (Shannon Tyo) crafts a profile that displeases the professor mightily. The article also causes problems professionally (her students, especially the Christian students, find her judgmental) and personally with Miriam’s longtime companion (Elijah Alexander), an archeologist spending more and more time on his far-away digs.

Weaving in and out of Miriam’s and Connor’s stories, the play allows for an overview of the Bible (via Miriam) and its role in persecution and personal pain (via Connor). What’s really interesting, though, is the sense that most of us know so little about the Bible other than the parts that are dragged out all the time (say hey, Leviticus!) or so ingrained in our consciousness (Ecclesiastes!) that it’s hard to imagine Western culture without them. Though the play isn’t interested in Bible bashing per se, it does seem to relish tossing off facts like such and such an apostle never existed! Such and such an apostle never actually knew Jesus! Except for Paul’s letters, the Bible is not historical! All these little nuggets indicate that the Bible is like a Christian Wikipedia, altered and edited by just about anyone and everyone, not all of whom had the best or most spiritual intentions.

The Good Book, which also features sharp performances by Denmo Ibrahim, Lance Gardner and Wayne Wilcox, can feel scattershot, but that’s probably by design. Except for a trite TV talk show moment, it all works and proves that from disparate parts, you can assemble something that, even though it seems unlikely, coalesces in a deeply meaningful, thought-provoking way.