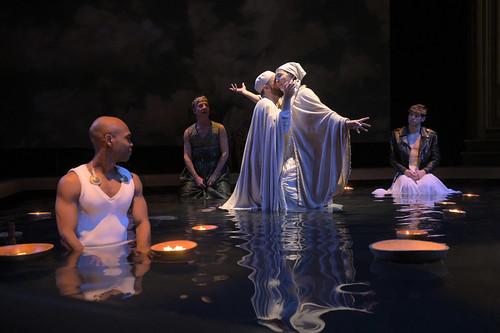 
When you write about theater, you’re often asked, “What’s your favorite show?” It’s an impossible question because there are so many ways to answer it. One of my go-to answers for the last nearly 20 years has been Mary Zimmerman’s Metamorphoses. When Berkeley Repertory Theatre was the first regional theater to produce the show after its premiere with Chicago’s Lookingglass Theatre Company, I was the theater critic for the Oakland Tribune/Bay Area News Group. Berkeley Rep’s theater on Addison Street was otherwise occupied, so Metamorphoses, complete with its gorgeous central pool, was produced on the UC Berkeley Campus at Zellerbach Playhouse.

I had seen Zimmerman’s dazzling Journey to the West, but I was unprepared for the ways that Metamorphoses would knock me for a loop. The show, an adaptation of stories from Ovid, combined storytelling and visuals in such a way that each augmented the other, and the result was so emotionally and aesthetically powerful that it was like a theatrical apex.

You can read my full review of the 1999 production here. Now, nearly two decades on, Metamorphoses returns to Berkeley Rep, this time to the Peet’s Theatre. The actors and some details may have changed this time around, but my original review still holds.

This is not your dusty dry, overly intellectual Ovid. No, this is a splashy, funny, moving Ovid that is anything but dry.

The show remains stunning – still gorgeous, still moving, still an example of theater at its sumptuous best. There are moments that are stunning, thrilling, funny and breathtaking. After Berkeley Rep, the show ended up on Broadway, where Zimmerman won a Tony. 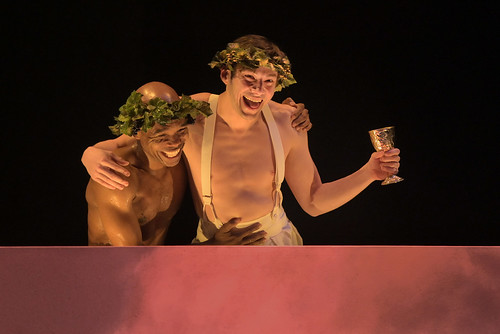 Amazingly, four of the ’99 production cast members are back for this production (a co-production with the Guthrie Theater of Minneapolis): Raymond Fox, Louise Lamson, Felicity Jones Latta and Lisa Tejero. The ensemble is rounded out with some superb additions: the remarkable Steven Epp (a frequent visitor to Berkeley Rep), Rodney Gardiner, Benjamin T. Ismail (Louis in Berkeley Rep’s superb Angels in America), Alex Moggridge (another Berkeley Rep stalwart last seen in Zimmerman’s Treasure Island), Sango Tajima and Suzy Weller.

It’s interesting how, with time, different things strike you. Twenty years ago, I remember being most taken with the tale of Eros and Psyche. This time around, it was Orpheus and Eurydice that got to me. So did the final story about Baucis and Philomen, who, when granted a wish, say they want to die together and so end their lives in a most beautiful and loving metamorphosis.

You never know if going back to revisit a favorite is a good idea or a bad one. For Metamorphoses, happily, another dip in this gorgeous pool is the best possible idea.