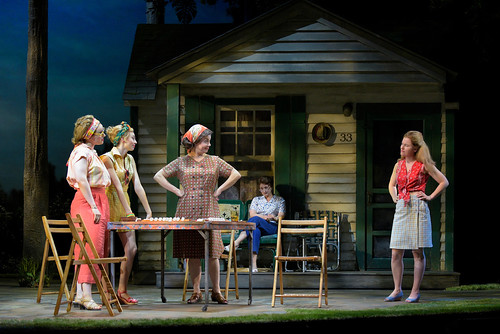 The cast of the world-premiere musical A Walk on the Moon at American Conservatory Theater includes (from left) Molly Hager as Bunny, Monique Hafen as Rhoda, Ariela Morgenstern as Eleanor, Kerry O’Malley as Lillian and Katie Brayben as Pearl. Below: Pearl (Brayben) and her husband Marty (Jonah Platt) dance while Marty sings about how much he looks forward to seeing Pearl every weekend. Photos by Alessandra Mello


There’s a better musical struggling to emerge from the overgrown but amiable mess that is A Walk on the Moon, the world premiere that American Conservatory Theater is launching on the Geary Theater stage.

Based on the 1999 movie of the same name and featuring a book by Pamela Gray, who also wrote the screenplay, the musical is essentially two summertime coming-of-age stories: one for the housewife who had her first child at 17 and has lost her sense of self in the ensuing 14 years; and one for the 14-year-old daughter who is experiencing her first romance and also figuring out her parents are human beings (flaws and all).

It’s the summer of 1969 in a Catskills bungalow colony where New York’s Jewish families escape the oppressive city heat, and there will be two defining events. Neil Armstrong will become the first man to walk on the moon, and just a stone’s throw from the bungalows, 400,000 people will descend on a music festival called Woodstock.

The musical closely follows the movie as Pearl, the mother, embarks on an affair with The Blouse Man (the hippie version of a traveling salesman), while her husband, Marty, is stuck at his television repair job in the city. Alison, the angsty, angry teenage daughter, has a sweet summer romance with Ross, a fellow camper with a penchant for guitar playing and songwriting. The two summer flings intersect (not very believably), and the Kantrowitz family, which also includes Marty’s mom, Lillian, and younger son, Danny, is thrown into crisis. 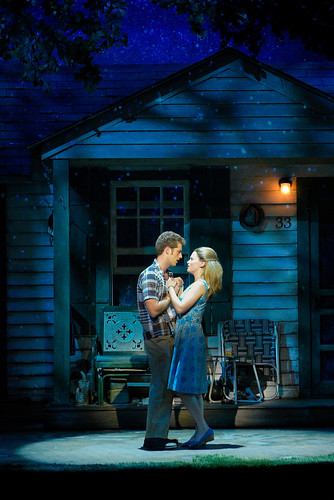 The basic problem with this musical Walk is that it doesn’t come to emotional life until Act 2. The Act 1 ending, with the entire camp gathered to watch the moon landing and walk, should be thrilling, but it’s not. It feels like a bunch of characters, most of whom we barely know or care about, watching TV. We see the broadcast footage on the giant projection screen that makes up the set’s back wall, but watching TV in live theater is never exciting. The same is true when the characters go to Woodstock. The stage is awash in archival footage of the concert, so it never feels like a live event being experienced by the characters. It feels like actors wandering through archival footage. Also not exciting.

The score, with music and lyrics by Paul Scott Goodman (and additional lyrics by Gray) is, like so much of the show itself, pleasant but bland, and there’s way too much of it. Of course the moon landing is a pivotal communal, emotional event for the show (and the country), but Goodman and Gray pound the metaphor of the lunar accomplishment into painful, monotonous submission. Some lines and lyrics are corny beyond belief, giving truth to the old legend – at least this Moon is occasionally made of cheese.

There’s often a visible moon in the sky of Tal Yarden’s projections, and at one point in Act 2, the moon is so big, it looms over Donyale Werle’s verdant mountain forest set like the evil Death Star.

Though there’s a cast of 14, there are really only five characters of note. Pearl, as played by Katie Brayben, is a strong focal point for the show, though she never has the charm or vulnerability that Diane Lane brought to the movie (a tall order to be sure, but Lane really did make the movie work). Jonah Platt as Marty is most interesting in Act 2 when his world starts to crumble and he has to reevaluate who he is as a husband, father and human.

Zak Resnick is so soft spoken and gentle as The Blouseman (aka Walker Jerome) that he barely registers, but Kerry O’Malley is superb as Pearl’s smart cookie mother-in-law, and her big number, “The Microscope,” is the one song that makes a real emotional connection.

Brigid O’Brien as Alison, makes a strong impression as a screaming teen who hates her mother, so it’s delightful to watch her blossom as she falls for the dorky/cool charm of Ross (Nick Sacks) and then to see her maturing into a more emotionally grounded young woman.

Director Sheryl Kaller and her creative team traffic heavily in nostalgia, and that’s just not enough to sustain the 2 1/2-hour show. There’s a lot of dead space in Act 1, and that hampers the eventual lift off of Act 2. To be more wicked about it, there’s a long way to go before A Walk on the Moon begins defying gravity.