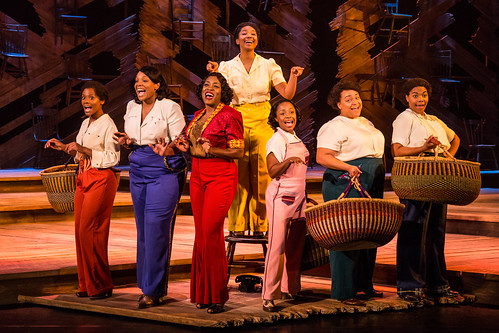 Adrianna Hicks (above center) is Celie in the North American touring cast of The Color Purple, a musical based on Alice Walker’s novel and the 1985. The show is part of the SHN season at the Orpheum Theatre. Below: Hicks (left) bonds with N’Jameh Camara as sister Nettie. Photos by Matthew Murphy


When I originally reviewed the musical version of The Color Purple based on Alice Walker’s Pulitzer Prize-winning novel and the Steven Spielberg’s 1985 movie version, I felt the production was too Broadway slick and the score was too bland. The only thing that worked – and indeed the thing that saved that October 2007 touring production – was Walker’s story and her powerful characters. (Read the review here.)

That was only 11 years ago, but The Color Purple is back. The original production (which boasted Oprah Winfrey, who made her screen debut in the movie, as a producer) ran for three years on Broadway and toured successfully across the country. But British director John Doyle saw something more in the show, so he stripped it down to its bare essentials and remounted it in London. That production, which transferred to Broadway and won a Tony for best revival in 2015, is now on tour and has pulled into the Orpheum Theater as part of the SHN season.

Doyle’s faith in the story is well placed. Even when the score (by Brenda Russell, Allee Willis and Stephen Bray veers from emotionally powerful to schmaltzy, the plot and characters carry the day in this shrewdly re-focused production. Doyle even designed the simple unit set: rough-hewn wood walls covered by hanging chairs. Those chairs are utilized in many ways – creating a prison, a church, an African village, farm equipment – all of which are simple and effective. Wicker baskets are also well used to help create the workaday world of rural Georgia in the Great Depression.

Without much Broadway flash, it’s up to the company to provide the passion, and for the most part, this touring company delivers. Vocally, the show is a feast (though the sometimes excruciating volume of the amplification in the Orpheum does them a disservice), from the first gospel-tinged number, “Mysterious Ways,” to the gorgeous title song and its attempt to find God in the smallest, most beautiful details. 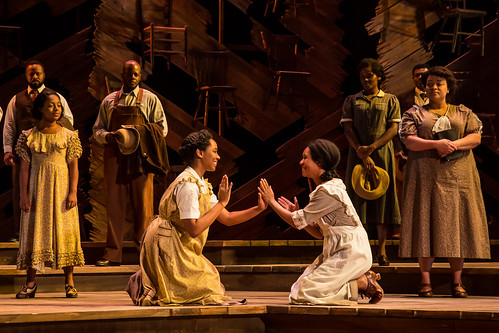 The pacing is too often rushed as the cast scurries to get the show in under the 2 1/2-hour mark, but there are standout moments in this story of Celie (Adrianna Hicks), a woman for whom life has been one kind of abuse after another. If it’s not her father raping her and giving away their children, it’s her husband, Mister (Gavin Gregory), working her like livestock and actively combating any shred of happiness she might find.

The bright lights in Celie’s life also spark the show itself, which means this show belongs almost entirely to the women (the men are fine, but they’re mostly bad guys or chumps). The first burst of light comes with the arrival of honky tonk singer Shug Avery (Carla R. Stewart), who gives Celie her first taste of love and self-confidence. Another force in Celie’s life is Sofia (Carrie Compere), a woman with all the power and confidence (and charm and sass) that Celie lacks.

Shug’s juke joint performance of “Push da Button” continues to be a showstopper, as does Sofia’s “Hell No!” The rest of the score is pleasantly unremarkable, which is a shame. This is a story of awakening that deserves a timeless that is so clear and so sophisticated that it seems to have always existed.

We get a glimpse of that in Celie’s aria of awakening, “I’m Here,” beautifully performed by Hicks. Even with the hurried pace of the show, even with some performances that don’t spark the right chemistry or earn the necessary emotional weight, the import of Celie’s transformation comes through, and the connection of family, both genetic and emotional, makes for an ending that wrings honest tears.

Director Doyle knew that the more he pared down the musical (a song or two cut, a judicious paring down of dialogue) to make way for the heart of Walker’s novel, the better of we’d all be. He was absolutely right, and now The Color Purple feels like it’s almost a great musical.