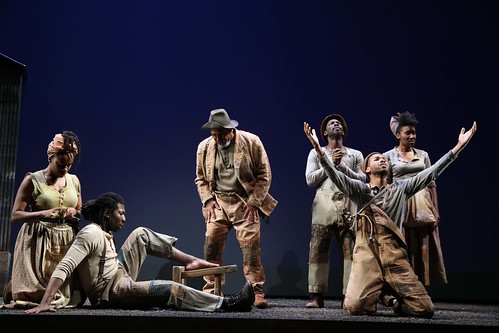 
There’s some epic myth-making happening on the stage of American Conservatory Theater’s Father Comes Home from the Wars (Parts 1, 2 & 3). Playwright Suzan-Lori Parks – one of those great American playwrights whose mere name should always inspire you to check out her work – nods in the direction of other great epics, most notably The Odyssey, but also, as she has said, The Oresteia and The Mahabharata as she tells the story of a slave who reluctantly follows his master into the Civil War.

It’s interesting that Parks’ title is very specifically about a father coming home, but in the play, no character is (yet) a father. Perhaps this is an indication of the even greater scope of Parks’ project, which she envisions as being at least six more parts.

As it stands now, Father’s three parts clock in at a solid three hours (with one intermission), and under the direction of Liz Diamond, part one, which essentially explores whether our hero, named Hero, naturally, will actually accompany his master into war in exchange, so the master promises, for his freedom at the end of the fight, becomes repetitive and draggy in spite of fiery performance by Steven Anthony Jones as The Oldest Old Man and father figure to Hero (again, not an actual father). It seems Parks is slowly ramping up her storytelling – a rich blend of the contemporary, the lyrical and the classical – because part two is much more engaging, with part three finding an ending that doesn’t quite feel like an ending (because more parts are forthcoming).

In part two, we get right into the crux of what it means to be free. Hero (a stalwart James Udom), has reluctantly followed The Colonel (Dan Hiatt) into war. It rankles Hero that he’s fighting on the wrong side, but he’s such a noble character that the thought of running away strikes him as stealing because he is the property of someone else. The Colonel, who is fond of drink and oration, is holding forth in front of his captured Union soldier, Smith (Tom Pecinka). The interactions between Hero and the soldier are especially charged and lead Hero to wonder how much he’ll be worth when freedom comes. Freedom, as it turns out, isn’t actually free. 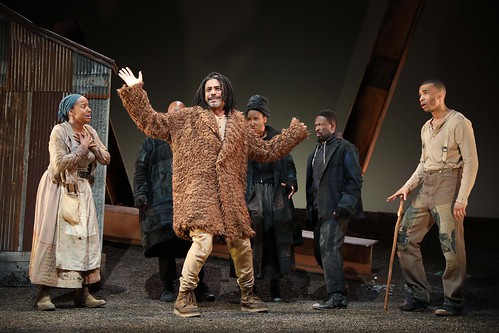 Hiatt delivers an astonishing monologue about how happy The Colonel is to be white, and the conclusion of this war section is tender and wrenching. You’d think such adjectives would be more appropriate for part three, when Hero, now called Ulysses (a nod to Homer and to Gen. Grant), returns to his pining wife Penny (Eboni Flowers) back on the plantation. But this final part, rather than being emotional, tends toward the comic thanks to Hero’s faithful canine companion, Odyssey Dog, played with adorable verve by Gregory Wallace. In Parks’ world, it’s not remotely odd that the dog can talk, but it is frustrating that he can’t seem to get to the part of his story that reveals whether Hero is alive or dead.

The stakes are high. There’s word about some sort of (emancipation) proclamation having to do with freedom, but the three runaway slaves hiding out in the slave quarters until nightfall (Rotimi Agbabiaka, Chivas Michael and Britney Frazier filling in for Safiya Fredericks at Wednesday’s opening-night performance) are still heading out. The trio may become a quartet with the addition of Homer (Julian Elijah Martinez), a slave whose foot was cut off years ago by Hero in a cruel demonstration of power and punishment dictated by The Colonel. In Hero’s absence, Homer and Penny have shared a bed, but Penny has saved her heart for Hero/Ulysses, a man whose name change isn’t the only lasting effect of his wartime experience.

Parks finds music in her dialogue, and she has also woven a musician (guitarist/singer Martin Luther McCoy) into this tale, further elevating the lyricism of her epic. Set designer Riccardo Hernández and lighting designer Yi Zhao lend the story a sense of vastness and space in their elegantly spare stage pictures.

It’s interesting that Father Comes Home is the second time in the last year here in the Bay Area we’ve seen The Odyssey refracted through the African-American experience. Last summer, California Shakespeare Theater offered up black odyssey, Marcus Gardley’s extraordinarily moving and vibrant journey of a man named Ulysses (read my review here and note that the production returns to Cal Shakes this summer Sept. 25-Oct. 7). Clearly the time has come to crack open the classics and reflect the epic nature of every human struggle against oppression and violence, the intricate dramas of every human heart and the ways in which every life is connected, one to the other.