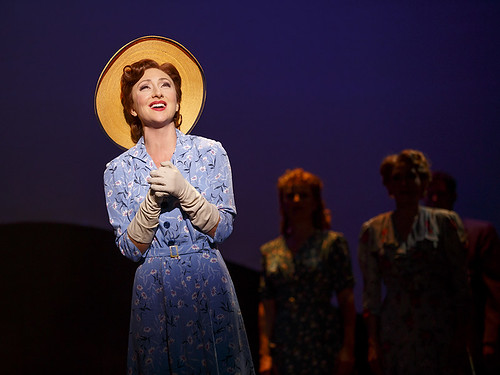 Carmen Cusack reprises her Tony-nominated role as Alice Murphy in the touring production of Bright Star, now at the Curran Theatre. Below: A.J. Shively also reprises his role for the tour: Billy Cane, who has just returned from World War II and is ready to start his life as a writer. Photos by Joan Marcus


Steve Martin and Edie Brickell’s Bright Star is a beautiful musical, especially if you have a penchant for bluegrass music and florid stories with twists, turns and not-so-surprising surprises.

It feels like a quintessentially American musical in several ways, the first being that glorious, banjo-heavy bluegrass, which brings to life a story that stretches from the 1920s to the 1940s in North Carolina. That is such a bright, emotional American sound, filled as it is with elements of country and gospel and soul-rattling spirituals. It is an absolute pleasure to sit in a theater – the Curran Theatre in this case – for two-plus hours and listen to a great bluegrass band and the soaring voices of the cast.

The other way Bright Star is so very American is the way it renders African-American people in the South completely invisible. They aren’t on stage. They aren’t mentioned. They may as well not exist. Apparently Martin and Brickell felt it was necessary to abide by the Jim Crow system of the time, which is a shame because this story, which we’re told is “inspired by a true event,” isn’t important enough to be yet another “whites only” story of America. 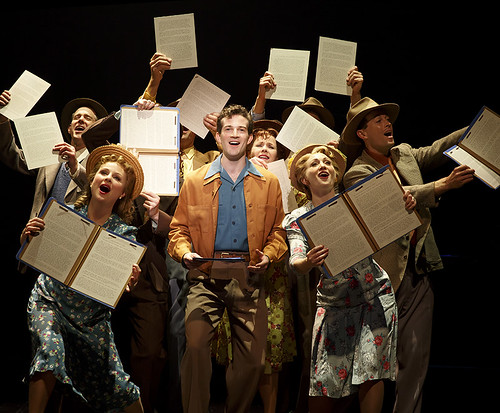 That makes it hard to love a show that is eminently lovable. The original, Tony-nominated leading lady from Broadway, Carmen Cusack signed on for the tour, which is fortuitous circumstance for audiences around the country. Cusack has a rich, expressive voice that is able to make the best possible case for bluegrass-informed show tunes. She reveals everything she can about her character, Alice Murphy, through songs like the opener, “If You Knew My Story,” and her magnificent “At Long Last” as all the strands of her story come together. This is Alice’s story, after all, as she takes us back to her youth and re-lives a series of events – a romance with the mayor’s’ son, unintended consequences, tragedy – that eventually led her to success as the editor of the literary magazine the Asheville Southern Journal.

If Cusack wanted to sing the score as a one-woman concert version, that would be splendid, but it would rob us of some of the production’s other pleasures, from the elegant, fluid staging by director Walter Bobbie to the graceful/rambunctious choreography by Josh Rhodes to the effectively minimalist set by Eugene Lee that enlists actors to move pieces on and off and keeps the on-stage shack that houses the band shuttling around the stage like a lone bumper car at a carnival.

The music is credited to both Martin, who has gone from being a “wild and crazy guy” to a guy who is pretty much doing anything and everything he wants, and Brickell, with book by Martin (featuring more humor than you might imagine in what is a pretty melodramatic tale) and lyrics by Brickell. It’s the hope-tinged music – more than any words either spoken or sung – that is most moving. The great, mostly string band is led by P. Jason Yarcho, with music supervision by Peter Asher and Rob Berman (who also did the glorious vocal arrangements). Bonus points to the musicians for not getting motion sickness.

It’s all in service to a story that is pulpy to say the least. Family secrets, parental interference, thwarted love and blossoming romance all play a part. There are so many spinning wheels of plot it feels a little like Shakespeare, especially when everything comes together and the couples start pairing off, which then makes it feel like Guys and Dolls. There’s a sweet romance between lifelong friends, appealing “big city” secondary characters, villains who feel like they just stepped out of a silent movie after tying a damsel to the railroad tracks and one moment of kindness between a father and daughter that is remarkably poignant.

Bright Star is quaint and old-fashioned … to a fault. It’s whitewashed loveliness is definitely of another era, but its beauty – that music! – is undeniable.

[bonus videos]
Carmen Cusack performs “Sun Is Gonna Shine” and “If You Knew My Story” from Bright Star.