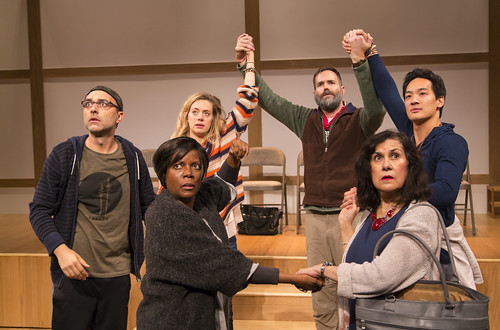 
In the predominantly wordless play Small Mouth Sounds, now at American Conservatory Theater’s Strand Theater, it was a seemingly shambolic monologue that struck like a bolt of theatrical lightning.

The genius of Bess Wohl’s play, which is taking a victory lap around the country after its success off Broadway, is the way she and director Rachel Chavkin (late of Broadway’s Natasha, Pierre & the Great Comet of 1812) sculpt the silence and the storytelling into beats and rests and crescendos like conductors offering a symphony on the noise and connect/disconnect of modern life. There’s so little that’s actually said that every actual word, every sigh or grunt (or other small mouth sound) tells us something about a character’s emotional state or relationship with another character or with life in general.

This is a play about discovery, and because it’s such a unique experience to spend time in the relative quiet of mostly wordless storytelling, it’s best not to know too much. But do know this: Wohl and Chavkin, working with set designer Laura Jellinek, lighting designer Mike Inwood and sound designer Stowe Nelson have everything so firmly under control that you can just relax and trust that this will be a rewarding experience – warm, funny and moving.

The nice thing about Wohl’s premise – six urbanites descend on a forest retreat center for five days of silent meditation under the tutelage of heard-not-seen guru (Orville Mendoza) – is that everyone could easily come off as a stereotypical joke of a spiritually starved/evolved human giving in to New Age hooey. But as with most details here, Wohl is more interested in actual, flawed humans than in tired sketches. 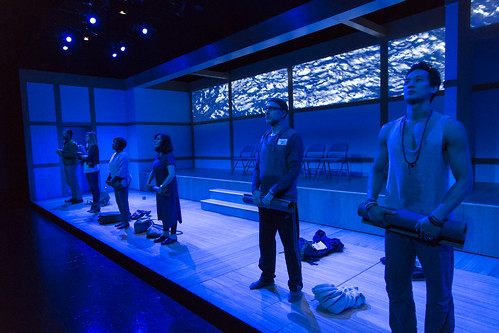 The six retreaters all feel like people we know (or think we do), and by the end of the play’s 100 minutes, we care about them because we’re invested in their quest to find answers to help them change something about their lives. That something in most of the cases here, is pain caused by death, disease, catastrophic luck, heartbreak, overweening ego. You know, the usual.

Mostly the characters abide by the rule of silence, but several of them – Cherene Snow as Judy and Brenna Palughi as Alicia – have a hard time unplugging from the digital world and just need to do one more thing on the iPad or make one more desperate call. Another great thing about the play (and Jellinke’s set) is that we can go from the meditation room to the bear-infested forest (featuring nature projections by video designer Andrew Schneider) to the sleeping quarters, where in frames of light, we watch the intimate rituals of getting ready for sleep and dealing with another person in that space. For roomies Ned (Ben Beckley), a serious all-in kind of guy, and Rodney (Edward Chin-Lyn), a celebrity yoga guru, it’s a decidedly uncomfortable space but fascinating to watch how much we get to know about these men simply by watching them interact wordlessly (and in passive and not-so-passive aggressive ways).

Also serious about making the most of her retreat are Joan (Socorro Santiago), whose fragile optimism seems destined to shatter, and Jan (Connor Barrett), a quirky guy who can’t seem to get enough sleep but is also capable of small but powerful acts of kindness.

Amid all the awkwardness and failed attempts at spiritual evolution, we get moments of genuine sadness (a kind of grief with the force of a locomotive) and silliness (skinny-dipping anyone?), all of it leading to – what? – the end of the retreat, certainly. But like the retreaters, we hope for something more than simply an ending: connection, hope or, if we’re really lucky, transcendence. Amazingly, Small Mouth Sounds offers some of all that.

But that lightning-bolt monologue is the thing that super-charges the play because, from a place of inner peace-seeking and spoofing, it seriously asks if, in a time of tumult and trouble, we should really be seeking inner peace. Maybe we should be riled up and angry and acting on those feelings. Maybe, amid the silence, we can use our words to make outer change as well as inner.

[bonus interview]
I talked with playwright Bess Wohl for a feature in the San Francisco Examiner. Read it here.