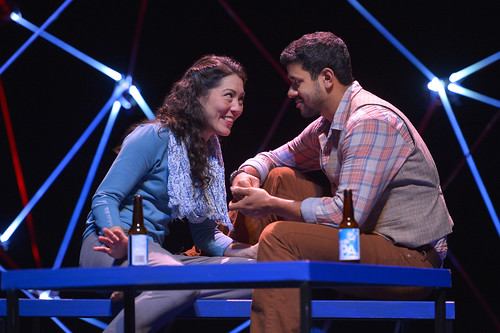 Above and below: Cosmologist Marianne (Carie Kawa) and beekeeper Roland (Robert Gilbert) experience a multiverse of love in the Bay Area premiere of Nick Payne’s Constellations presented by TheatreWorks Silicon Valley at the Mountain View Center for the Performing Arts. Photos by: Kevin Berne


British playwright Nick Payne isn’t interested in changing minds or even changing the world in Constellations. He settles for nothing less than changing the universe – over and over again. Imagine if Einstein and Hawking had decided to write a love story – you might get something resembling this fascinating play.

Payne’s 2012 play, which debuted at London’s Royal Court Theatre before heading to New York in 2015 (in a production that marked the Broadway debut of Jake Gyllenhaal), is an absolute wonder. That a two-person, one-set, 70-minute play would find success in regional theater was a forgone conclusion. Who wouldn’t want to produce an economical romance with an intellectual twist and an ever-deepening sense of engagement?

The first local company to leap at the chance is TheatreWorks of Silicon Valley performing at the Mountain View Center for the Performing Arts. The advantage of a two-person show in this space (as opposed to the company’s other, smaller performance home, the Lucie Stern Theatre in Palo Alto) is that we get a glorious light sculpture set by Andrea Bechert and lit by Steven B. Mannshardt that creates a vast universe of constellations, one for each of the short scenes that plays out between the two characters as they meet, fall in love, break up, face death and fracture like mirrors before putting themselves back together in different configurations.

When the play, under the sharp direction of Robert Kelley, begins, it feels a little like an acting class exercise. Carie Kawa is Marianne, a theoretical cosmologist whose job keeps her head in the stars and in the atoms and in the realm where several different outcomes can exist simultaneously. Robert Gilbert is Roland, a beekeeper, a grounded farmer of a sort whose head is in the biology of drones and hives and honey. The two meet at a rainy barbecue, and we see their meeting over and over again, each time with a slight variation. She strikes up a conversation and he turns out to be married. Or, as the scenes fly, by, he’s just out of a long relationship, and they finally click. 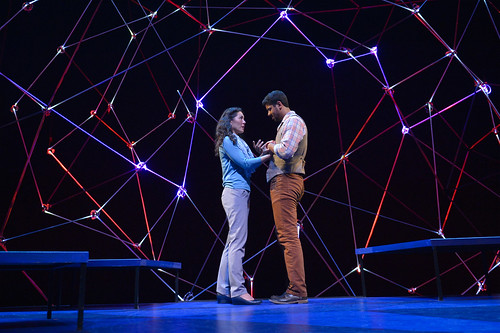 The whole play is like this: variations on a theme of Marianne and Roland. They’re together and happy. They’re together and she’s cheating. No wait, he’s cheating. They’re broken up. They’re together and dealing with serious illness. And so on. Once we get into the swing of the play, it’s easy to see how each variation, each shift of the universe, lets us watch the characters explore multiple facets of their personalities both as individuals and as partners in this coupling. Their humor and heartbreak and violence and family histories all come into play, and though each scene gives the characters a slight or major variation, we the audience begin to accumulate a rich, full view of who these people are, who they strive to be and what might be holding them back.

I’ve never seen a play like this, and by the time it ends, it’s hard to believe it’s only been just over an hour since it started. The fast pace and the swift accumulation of information makes the experience feel far deeper and more complete that many much longer plays.

That said, there’s also a slight disconnect working here as well. Perhaps its cause is rooted in the fact that Gilbert’s performance is more nuanced in showing us different facets of Roland than Kawa’s is in revealing Marianne. It could also be the play itself, which, by the end, feels like it should have accumulated much more emotional weight than it actually has.

While the love story between Marianne and Roland is the centerpiece of the play, the notion of free will versus a fully mapped out universe of fated behavior creates a fascinating tension, even while we’re invested in the sad, playful, angry phases of the romance. Other works have explored parallel universes (the movie Sliding Doors, the musical If/Then), but Constellations is a more interesting work – more serious and more plausible. And, it must be said, the notion of being able to slip into an alternate reality has rarely been more appealing that it is right now.

FOR MORE INFORMATION
Nick Payne’s Constellations continues through Sept. 17 in a TheatreWorks of Silicon Valley production at the Mountain View Center for the Performing Arts, 500 Castro St., Mountain View. Tickets are $40-$100. Call 650-463-1960 or visit www.theatreworks.org