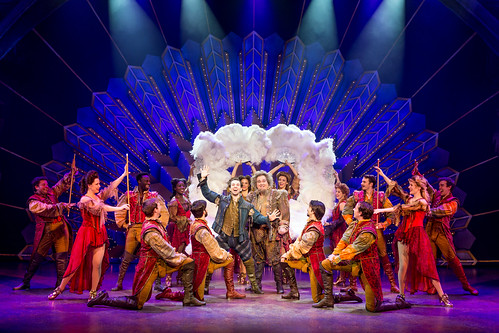 Shakespeare sings (sort of)! Rob McClure (center, arms wide) is Nick Bottom, co-inventor of the musical, in the touring production of the hit Broadway musical Something Rotten!, part of the SHN season at the Orpheum Theatre. Below: McClure as Nick and Adam Pascal as his arch rival, William Shakespeare. Photos by Jeremy Daniel


Thank you, Something Rotten!. I need that.

Sometimes you need light and froth and delectable show tunes to lift you out of the quagmire of our something-more-than-rotten times, and this musical, now at the Orpheum Theatre as part of the SHN season, is just the ticket.

But it’s not like current events are completely shut out. On the contrary. At Wednesday’s opening-night performance, a line about Nazis in The Sound of Music, which may have been slightly tweaked for the unfortunately Nazi-heavy news cycle this week, got such an audience response that it actually stopped the show.

But mostly, Something Rotten!, which ran for nearly two years on Broadway, is a whole lot of escapist fun, a crisp and funny contemporary example of why the classic musical comedy model works. Give ’em song and dance razzle dazzle, some hearty (and bawdy) jokes and tunes that don’t feel like the aural equivalent of gummy risotto and you’ll likely have a happy audience. And the San Francisco audience sure seemed happy.

Conceived by brothers Karey and Wayne Kirkpatrick, who wrote music and lyrics and co-wrote the book (with John O’Farrell), Something Rotten! is sort of a spin on Shakespeare in Love but more like Shakespeare in Rivalry (with jazz hands). It’s all about the invention of the musical as a means to surpass Shakespeare as the rock star playwright of Elizabethan times.

Brothers Nick and Nigel Bottom run a struggling theater London theater company. They are constantly in the shadow of Shakespeare, who used to be a bad actor in their company before Nick encouraged him to become a writer. They’re barely scraping by, and in desperation, older brother Nick spends his family’s last few coins to engage a soothsayer, Thomas Nostradmus (a distant relative of the more famous Nostradamus), to find out a) what the next big thing in theater is going to be and b) what Shakespeare’s greatest hit will be. The answers are, in order: musicals! and something about a sad prince eating a danish called Omelette. 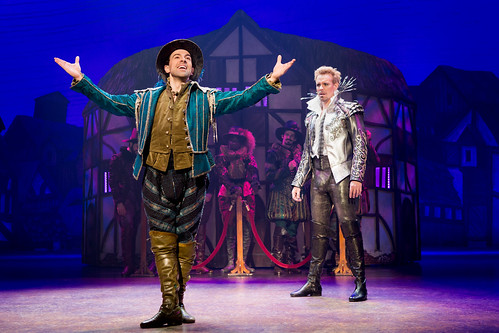 In the meantime, Nigel (the dreamy poet and the eventual, actual author of Shakespeare’s Hamlet) falls in love with Portia, a Puritan’s daughter, and Bea, Nick’s enterprising and equality minded wife, dons men’s drag to find gainful employment (and prove her point that women are the equal of men).

Director/choreographer Casey Nicholaw (The Book of Mormon, Aladdin) knows his way around bright and fizzy musicals, and he keeps Something Rotten! clipping right along, even when the heavy heart on its sleeve weighs things down a bit. The best moments are its lightest and brightest, with the absolute most memorable show-stopping moment coming with the Act 1 number, “A Musical,” when Nostradamus (Blake Hammond) reaches into the future to explain to Nick (Rob McClure) the whole concept of a musical. He borrows liberally from classic shows (The Music Man, South Pacific) and more contemporary shows (Rent, A Chorus Line) to illustrate his point, along with a tap-dancing, high-kicking chorus. The number builds to a frenzy of delight, and though the show peaks here, we are carried through to the end on such a wave of grinning good will that it hardly matters.

McClure’s central performance as Nick is as solid a musical comedy turn as you could hope for, and he’s nicely supported and contrasted by Josh Grisetti as the moony poet Nigel and by his real-life wife, Maggie Lakis playing his on-stage wife. For the role of Shakespeare, you need someone who can lend some rock-star edge to the role because that’s how he’s played here – he even performs a stadium-like greatest hits concert for his swooning fans – and Adam Pascal of Rent fame fits the bill. It also helps that he can be pretty funny while he’s parading around like the cock of the Tudor walk in the mighty pleasing costumes by Gregg Barnes (the codpieces alone are hilarious).

The character/actor who drew the most audible laughter from me was Scott Cote as the Puritan, Brother Jeremiah, who is fond of expressing his disdain for the corrupt world and its godless inhabitants by shrugging, shading, and flouncing like he was a contestant on RuPaul’s Drag Race.

The general irreverence dial could be turned up a few notches for the show, but its sweetness is nicely cut by the numbers that Nick and Nigel are writing for the “new” musical theater form they are developing: “Black Death” (dancing Grim Reapers!), “It’s Eggs” (a scrambled notion) and “Make an Omelette” (more, more, more inside Broadway musical references).

Something Rotten! is definitely something delightful in the state of musical comedy. It’s also a show that basically reviews itself in its centerpiece song: “A big and shine-y, mighty fine-y, glitter-glitz-and-chorus-line-y, bob your head and shake your hiney musical.”

[bonus video]
Watch the Broadway company perform an abbreviated version of the standout number from Something Rotten, “A Musical.”