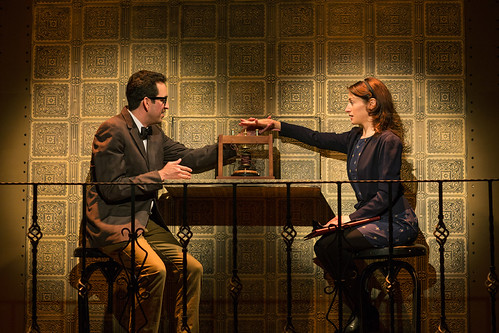 Brady Morales Woolery is Watson, Sarah Mitchell is Eliza in Madeleine George’s The (curious case of the) Watson Intelligence, a Shotgun Players production at the Ashby Stage. Below: Mick Mize is Merrick (with Morales Woolery as Sherlock’s friend Watson in the rear). Photos by Jessica Palopoli


Now that artificial intelligence has infiltrated our homes (Amazon’s Alexa) and our pockets (Apple’s Siri), we have robotic personal servants at our beck and call, just waiting for us to ask for directions, to compose a message or even tell us a joke (did you ever ask Siri the meaning of life?).This is a fun, occasionally helpful technological development, but like so much in our Silicon Valley-centric world, it’s hard to fathom just how extraordinary this is.

Except for the flying cars, we are pretty much living The Jetsons, and we take it in stride. Playwright Madeleine George attempts to knock some wonder – and perspective – into us in her play The (curious case of the) Watson Intelligence, now at Berkeley’s Ashby Stage in Shotgun Players production. George tackles one of the key issues of our time – how, with all this instant and constant digital connection, can we still be so isolated – but does so in a clever – if not wholly satisfying – way.

Sort of a comedy, sort of a drama, Watson examines invention in three different eras, each enlivened by the same three actors playing different characters with the same names. The first era is our own. A genius named Eliza (Sarah Mitchell) has left the bosom of Big Blue (IBM) and embarked on the start-up road. Her talent is for artificial intelligence, and taking a cue from IBM’s Watson, which famously competed and won on Jeopardy in 2011, she has built a full-blown AI man named Watson. Played by Brady Morales Woolery, Watson is the warmhearted version of robotic – if robots had hearts, that is. He speaks compassionately about wanting to give Eliza everything she needs, and if he doesn’t understand something, he requests she nudge him in the right direction with more specific information.

In other words, he’s the perfect man, unlike Merrick (Mick Mize), Eliza’s ex-husband, who is channeling his rage and betrayal into an election campaign aiming him toward the city auditor’s office. Merrick can’t deal with the smallest of tech details involving his home computer, so he gets a member of the “Dweeb Team” to help him out. Sure enough, this “dweeb,” one Josh Watson (played by Woolery) turns out not only to be helpful but also willing to spy on Merrick’s ex-wife, whom he is sure is plotting something against him (she’s not). 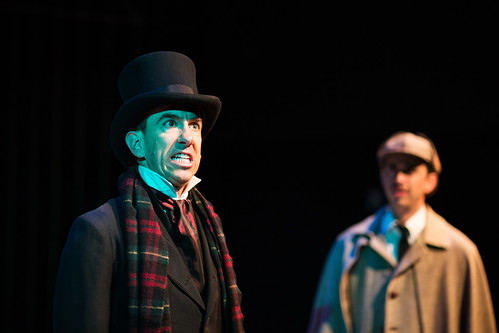 When the time period flips, it’s into the 1800s and the world of Sherlock and Dr. Watson. A woman (Mitchell) shows up at 221B Baker Street with a mysterious and tiny wounds on her hands and arms. Sherlock is out, so Dr. Watson (Woolery) takes the case, leading him on trail that ends with an inventor named Merrick (Mize), who has the disturbing notion of replacing his actual wife with a less troublesome mechanical version. Nina Ball’s attractive, highly functional set is full of surprises that help make the time travel even more enjoyable.

Another time flip takes us to a 1930s radio studio where Thomas A. Watson (Woolery) is being interviewed about that fateful day in 1876 when Alexander Graham Bell made the first successful transmission over a wire, “Mr. Watson! Come here. I want you.”

All the Watsons are interesting here because Woolery’s performance is so full of delight in whichever one he’s playing. Whether he’s a robot, a techno geek in love or a famous sleuthing sidekick, he crackles with humor, intelligence and enthusiasm.

Director Nancy Carlin encounters some pacing problems in the two-plus hours of the play, primarily in the contemporary scenes, which tend to become a bit of a slog. Much of that has to do with George’s script, which tends toward the overwritten, especially in the second act.

There are definitely diminishing returns as the play progresses, although there are a couple moments of real connection – once in a monologue from the telephone Watson and once from Eliza, who has a disarming passion for wanting to use the most advanced forms of technology to provide actual assistance to people most in need. It’s a revolutionary concept, and even more than fostering deeper connection between actual people instead of people “connecting” through screens, that idea – of Siri or Alexa or their more advanced progeny – filling out medical or housing paperwork or serving as legal adviser or just being smart in a situation when people don’t know how to be. That’s the staggering intelligence I’ll take from this Watson.

FOR MORE INFORMATION
Madeleine George’s The (curious case of the ) Watson Intelligence continues through Sept. 3 in a Shotgun Players production at the Ashby Stage, 1901 Ashby Ave., Berkeley. Tickets are $25-$40. Call 510-841-6500 or visit www.shotgunplayers.org.