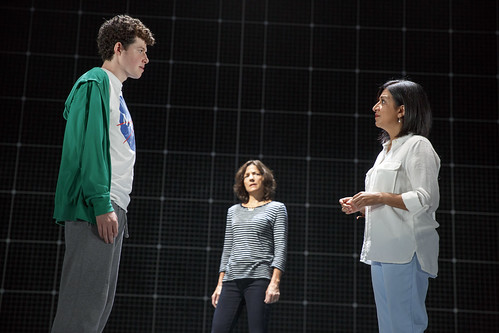 Adam Langdon (left) is Christopher Boone, Felicity Jones Latta (center) is Judy, and Maria Elena Ramirez is Siobhan in the touring production of the Tony Award-winning play The Curious Incident of the Dog in the Night-Time, a presentation of SHN at the Golden Gate Theatre. Below: Langdon’s Christopher imagines being an astronaut. Photos by Joan Marcus


One of the (many) things live theater does better than just about any other storytelling is to allow you to crawl inside the head of someone different from you and let you experience the world through her/his eyes. I would venture to say the reason the play adaptation of Mark Haddon’s fantastic novel The Curious Incident of the Dog in the Night-Time (2003) has been such a massive success is the way it harnesses all the sensory tools of theater in ways usually reserved for musicals as a means of immersing us in the experience of a singular young man.

The play, adapted by Simon Stephens, premiered at London’s National Theatre in 2012, won a passel of prizes and transferred to the West End early the next year, where it continued to run until earlier this month (save for a brief dark time and search for a new theater when the balcony collapsed and injured 80-some people). Of course Broadway beckoned, and that production ran from October 2014 to September 2016 and won five Tony Awards.

That a play about challenges faced by a 15-year-old boy with autism spectrum disorder (just what he’s dealing with is never detailed) has become a worldwide phenomenon is surprising only if you haven’t seen the play. The touring company of the Broadway production opened Wednesday, June 28 at the Golden Gate Theatre as part of the SHN season, and what the venue lacks in intimacy, the production makes up for with its strong ensemble and its dazzling physical production.

Originally produced in the round in London, so the audience would have no choice but to be inside the characters head as he experiences some demanding and traumatic situations, Curious Incident has has to adapt to a proscenium for other venues, including this tour. What’s extraordinary about this production is that though the stage is a live with flashing lights (by Paul Constable) and hidden drawers and doors in its grid-covered black-box set (by Bunny Christie) and a crackling, booming sound design (by Ian Dickinson with music by Adrian Sutton) not to mention razor-sharp projections (by Finn Ross), the physical production’s bells and whistles only take us so far. It’s really all about the tight, 12-person ensemble, all of whom could convey the power of the story without a single flashing light bulb or animated back wall. 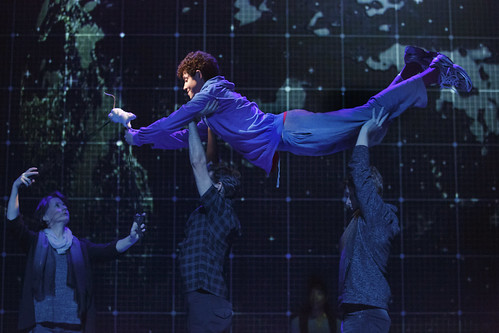 Director Marianne Elliott (War Horse) fuses the technical with the personal beautifully so that the show is as much high touch as it is high tech. Her actors, most of whom play multiple roles, form a true ensemble, moving blocks around the stage to create everything from trains to a police station to a school room. They all sit around the edge of the stage through the show’s two acts and 2 1/2 hours when they’re not involved in a scene. And when they all come together for the glorious demonstrations of the choreography by Steven Hoggett and Scott Graham, the show hits a cosmic level. In one scene, for instance, Christopher, the protagonist, imagines being an astronaut (he likes science, math and being by himself in small spaces), and the company renders his “weightless,” spinning through “space” by holding him and moving him over their heads. In another scene, Christopher has made his first solo train trip from his small suburban town to the center of London, and the stimulus of the city is overwhelming. We get that from the sound and visual design, but even more so, when the company creates the staggeringly spectacular illusion of allowing us to see him walking the city streets from above. The choreography can also convey, in a simple, straightforward and beautiful way, the aspects of Christopher’s daily routine when he returns home from school.

At the center of the ensemble and all the stage activity is Christopher, played with impressive restraint by Adam Langdon. Christopher’s is a specific world: no yellow, no brown, no touching. He’s brilliant at math (stay after the curtain call if you want to have fun with math) but doesn’t do chatting. He’s also a fantastic writer and is documenting the mysterious murder of a neighbor’s dog. His sleuthing forces him into some new and, for him, alarming places like having to talk to strangers, navigate the world on his own and confront some unpleasant family secrets.

Langdon is funny and vulnerable and brave as Christopher, and he receives stalwart support from some key members of the ensemble, including Gene Gillette as his dad, Maria Elena Ramirez as his teacher and Amelia White as a neighbor who shares cookies as easily as gossip.

The Golden Gate Theatre is a massive space, and though all involved (actors, designers) do everything they can to pull us into the black box of Christopher’s experience, there’s a big sense of distance here, and that’s too bad. For example, I wasn’t sitting that far back and couldn’t tell that Christopher’s rat, Toby, was a living animal. But we get the idea. Christopher’s head space is vast enough and interesting enough to propel this Curious Incident into the theatrical stratosphere.

The official trailer for Curious Incident.

FOR MORE INFORMATION
The Curious Incident of the Dog in the Night-Time, adapted by Simon Stephens from Mark Haddon’s novel, continues through July 23 at the Golden Gate Theatre, 1 Taylor St., San Francisco. Tickets are $55-$127. Call 888-746-1799 or visit www.shnsf.com.