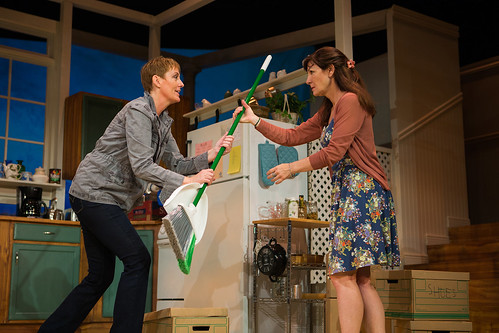 In Jen Silverman’s The Roommate at San Francisco Playhouse, Robyn (Julia Brothers) offers to clean up a mess while moving in with her new roommate, Sharon (Susi Damilano). BELOW: Sharon and Robyn spend a provocative evening at home. Photos by Jessica Palopoli


There are several wonderful things about Jen Silverman’s The Roommate now at San Francisco Playhouse, not the least of which is that it seriously considers the lives of two women in their 50s and their attempts to grow and change and correct what they perceive as some of the missteps of their lives.

The nearly two-hour one-act play, directed by Becca Wolff, is also heartily entertaining, contains some satisfying laughs and creates a showcase for two dynamic actors to create complex characters that are full of surprises.

Susi Damilano, the Playhouse’s co-founder and producing director, is Sharon, a 54-year-old divorcé living alone in her big Iowa house. Her grown son is off being a designer in New York, and her constant phone calls and texts are pushing him further and further away. So, aside from her book club and a weekly gig at a shop, she’s very much alone and adrift.

Not yet ready to accept a life of loneliness, Sharon boldly seeks, for the first time in her life, a roommate. Enter Robyn (Julia Brothers), an escapee of the Bronx seeking to re-start her life in the great American Midwest. The things we think we know for sure about Robyn are that she’s done many things in her life, including things that were illegal. She’s about Sharon’s age and also has a child. She’s vegan who has retired from writing and performing slam poetry and she’s gay. Everything else about this tall transplanted New Yorker is enigmatic to say the least.

Silverman’s set-up is part sitcom spin on “The Odd Couple,” with the worldly Robyn enlightening and shocking the more sheltered Sharon, and part unique invention. A thriller element is introduced that could take the play into lots of dark directions, but there’s also a more serious element involving two women coming to know one another, surprise one another and befriend one another. What they have in common, aside from being mothers who can’t (or don’t) rely on men for co-parenting, is that they are at points in their lives ripe for change. One is ready for excitement and challenge and danger, while the other is opting for a calmer, more focused life. One outcome is possible, the other less so. 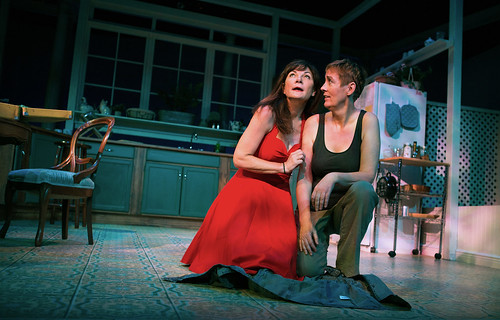 Damilano and Brothers play off one another beautifully, which makes the comedy bigger and the drama deeper. Sharon could easily be a stereotype of a ditzy Iowa housewife, but as written, there are layers to her, and Damilano adds even more complexity and endearing charm. Brothers is one of those actors whose name on a cast list should immediately make you want to see that play. She never disappoints and constantly surprises. Her Robyn is grounded and smart but also terribly conflicted. She wields some hard-won wisdom, which is lapped up by Sharon, her eager student. On the subject of child rearing, for instance, Robyn says, “Our children’t don’t have to love us. They just need to survive long enough to become us.” Brothers walks that fine line between being a fascinating new friend and a potentially deadly threat.

Watching these two wonderful actors spar and bond and surprise each other is the heart and spark of the play, and set designer Nina Ball makes good on the promise of Iowa specializing in “corn and space” with her airy suggestion of a Midwestern domicile. She and lighting designer Robert Hand and projection/sound designer Theodore J.H. Hulsker use light, shadows, projections and see-through walls to convey the vast Iowa sky (clouds, sunsets and stars abound). There’s a strong sense of isolation that works to effectively intensify the relationship forming between the women.

Director Wolff creates a strong sense of rhythm that builds nicely through twists, turns, laughs and emotional revelations. But then the play stumbles in its final moments. A monologue is delivered in the form of a phone call to God, and then another is delivered directly to the audience, neither of which is as effective as it needs to be. It’s not the way the play ends (the fate of the characters) that’s the problem – it’s how that information is conveyed.

Brothers and Damilano have earned enough audience love by this time to curtail any serious damage to such an enjoyable play, but there’s a stronger ending in here somewhere for all the fascinating women involved, the actors and the characters.