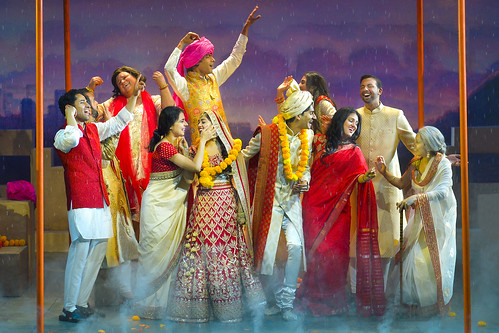 
Beauty, heart and fun flood the stage of Berkeley Repertory Theatre’s world premiere of Monsoon Wedding, the musical adaptation of the 2001 film of the same name. There’s clearly a lot of love invested in the making of this show, from the original film’s director, Mira Nair, who returns to helm this ambitious stage version, to the ebullient cast.

The music, by Vishal Bhardwaj, is an attractive fusion of Indian pop/Bollywood and musical theater storytelling, and the stage visuals can be stunning, from the elegant simplicity of Mikiko Suzuki MacAdams’ set design to the eye-popping colors and sumptuous textiles of the gorgeous costumes by Arjun Bhasin (who also designed costumes for the movie). There’s nothing terribly fancy about this production, but the colors of the fabrics, the abundance of marigolds and the lovely lights (by Donald Holder) make for highly pleasurable viewing.

But is it a good musical? Well, it’s a new musical, and it still needs a lot of work. With a few tweaks, mainly to simplify its crowd of characters, the book by the movie’s script writer, Sabrina Dhawan, sticks to the premise of the movie: a family in Delhi prepares for the arranged marriage of their daughter to a husband from a good family (which is now an Indian-American family from New Jersey). The subplots include a love story for the wedding planner and a domestic worker and a deep, dark secret that threatens to split the family.

What the musical has going for it is the energy of its score, performed by a bright seven-piece band under the music supervision of Carmel Dean and music direction of Greg Kenna, and the lively choreography by Lorin Latarro. The full company numbers are the most fun, although Dhawan’s book could be stronger in the set-up for the musical numbers. For instance, a fun number for the women, “Aunties Are Coming,” celebrates their sexuality and is a hoot, but it comes out of nowhere. And two numbers for the event planner, PK Dubey (Namit Das), and Alice, his love (Anisha Nagarajan), blur the line between fantasy and reality so strongly that they end up just being head scratchers. The first, “Goddess of the Light,” is beautiful, but Alice on a spiral staircase holding candles is either a fantasy vision or a badly written scene. The second involves stage-altering projections (by Peter Nigrini), a train and a horse. It’s so out of tune with the rest of the show that it’s hard to make sense of it as anything but absurd. 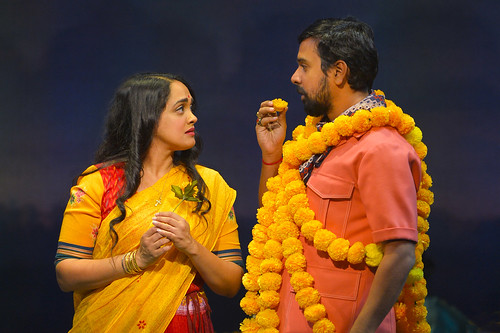 The leads are a problem. Kuhoo Verma as Aditi, the bride to be, and Michael Maliakel as the groom to be, have nice voices (Maliakel’s is especially swoony) but their bland performances come from weak characters. She’s a rebel who won’t conform to anyone’s idea of a “good girl,” and he’s a well-educated prig who traffics in stereotypical visions of happiness. They’re not interesting, though their one solid musical is the quartet “Neither Here Nor There” sung with Das and Nagarajan, whose conflict – he’s Hindu, she’s Christian – is far more compelling than forcing us to buy that an arranged marriage, where those involved have met twice before, will actually turn into a love match before the wedding ceremony.

The weakest link in this musical adaptation can be found in the lyrics by Susan Birkenhead. Banal, cliché, repetitive and jarring, the lyrics have a tendency to cheapen the music. She rhymes Vishnu and “wish-nu.” In the opening number we hear “love is good where love is strong.” And a comic lyric goes, “Long ago I was hot. Nowadays I am not.” And there’s a whole unnecessary song about a Romeo and Juliet situation during the partition of India and Pakistan sung by a character who, in the next draft, would probably be excised. The worst song in the score, however, is “Daughter of My Heart,” which is painful.

Still, the spirit of the musical is an embracing one. This is a show that, like the movie, wants to invite everyone into the family and celebrate with them. By the time we get to the wedding after some drama – the wedding is off! family secrets uncovered! – the vibe is lovely and loving, so the finale, which spills out into the audience, is gratifying and yes, celebratory.

There are charming performances here, most notably by Sharvari Deshpande as the cousin of the bride who brings real passion to her scenes, songs and dances. There’s some welcome comic relief from Monsoon Bissell (who also happened to be the first assistant director on the movie) as one of the aunties, and Das and Jagarajan make the most of their sparky chemistry (even in a bizarre moment when their characters fly, straight up, for a second, then come back down – really? that’s it?).

In the end, Monsoon Wedding as a musical doesn’t greatly improve over Monsoon Wedding the movie, which already had a lot of great music infusing its spirit without having to compromise its storytelling with weak lyrics or uneven performances.