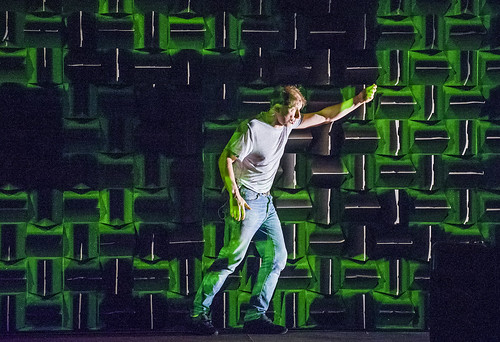 Simon McBurney in The Encounter, an immersive solo show incorporating 3-D audio headphones at the Curran Theatre. (Photo by Tristram Kenton) Below: McBurney delves into the disappearance of National Geographic photographer Loren McIntyre, while attempting to document the Mayoruna in a remote part of Brazil in 1969. (Photo by Robbie Jack)


Not to take anything away from Simon McBurney’s rather extraordinary show The Encounter now at the Curran Theatre, but my first encounter with binaural sound at Disneyland remains my favorite.

The Disney folks always seem to be searching for ways to jazz up the Lincolon-as-robot attraction “Great Moments with Mr. Lincoln,” and for a while, the jazz turned out to be a 3-D audio experience in which a young Union soldier prepares to get his photo taken by the famous Matthew Brady. He gets a haircut, and with the headphones on, you could practically feel the scissors snipping alongside your ears. Then, after the soldier is wounded in battle and recovering in a hospital, he meets and chats with President Lincoln, and the audio immersion attempts to give you a sense of what it might be like to be in the same room as our 16th president.

Happily, that theme park technology has been translated into theater. Low art grows up into high art in the form of this globe-trotting solo show from McBurney and his theater company, Complicite. Already a hit in London and New York, this unique theatrical experience involves McBurney on stage telling the story of Loren McIntyre, a photographer for National Geographic who would go on to locate the source of the Amazon. This particular story, though, is about how McIntyre got lost in Amazonia while attempting to photograph the Mayoruna people, an undocumented tribe deep in the jungle, and it is adapted from the book Amazon Beaming by Petru Popescu. 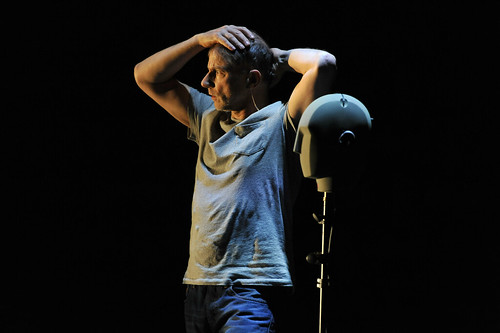 But the way McBurney, who directed (along with Kirsty Housley), tells McIntyre’s story makes all the difference. Harnessing the best of audio technology and a spectacular sound design by Gareth Fry with Pete Malkin, the show requires audience members to wear headphones for its nearly two-hour duration. At the top of the show, a very casual McBurney (a familiar face from Harry Potter movies and a bunch of other British movies you’ve seen) takes the stage and starts talking about photos of his children on his mobile phone, an antique videotape of home movies from his childhood and about how telling stories is what makes us human.

Then he demonstrates the bells and whistles of the sound design by pretending to walk through our brains and then shows off an incredible microphone center stage. It’s in the shape of a human head, and it conveys sound with a sense of direction and space so that it can feel like voices are coming from behind you or whispering so closely to your ear you can all but feel the breath on your neck.

It’s incredibly cool technology, and its effect, once the storytelling begins in earnest, is to create a shared experience for the audience as a whole that also manages to create individual sound bubbles in which McIntyre’s harrowing odyssey lost in the jungle becomes a dizzying spiritual experience that feels incredibly intimate.

Imagine Heart of Darkness meets Fitzcaraldo meets “Great Moments with Mr. Lincoln” and you’ll get an idea of what this experience is like. McBurney is offering a physically demanding live performance and all the vocal subtlety of a radio drama. Although I never got as swept up in it all as I would have liked, I fully appreciated how enthusiastically McBurney was able to expand the notion of solo performance through technology that can be expansive and personal simultaneously. It’s a close Encounter of the theatrical kind.

1 thought on “A unique aural Encounter at the Curran”