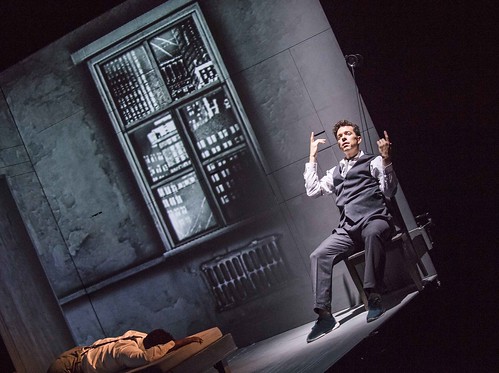 Wellesley Robertson III (left) as Miles Davis and Olivier Normand as Jean Cocteau in Robert Lepage’s Needles and Opium at ACT’s Geary Theater through April 23. Below: Normand as Cocteau. Photos by Tristram Kenton


With Needles and Opium, writer, director and theatrical visionary Robert Lepage has created a show that will be remembered – not necessarily for what it’s about but definitely for the way it looks.

What began as a 1991 one-man show performed by Lepage himself in his native Québec City has evolved into a theatrical marvel, the kind of show that creates one jaw-dropping image after another.

You could say it’s still a one-man show…ish. There’s a very Lepage-ish central character named Robert (Olivier Normand, an actor from Québec who is in Paris to narrate a documentary about jazz trumpeter Miles Davis’ 1949 concerts in a Parisian jazz festival. He’s also suffering intensely from a broken heart. From his room in the Hôtel de la Louisiane (Room No. 9, which is significant because it was once occupied by Jean-Paul Sartre and Simone de Beauvoir) he struggles through his pain leaning heavily on the music of Miles Davis, who appears as a silent, trumpet-playing character played by Wellesley Robertson III, and on the writings of Jean Cocteau, specifically his 1949 “Lettre aux Américains,” written on his way back to France after spending time in New York.

Unlike Davis, whose silence (save for his trumpet playing) seems strange, Cocteau, also played by Normand, talks a lot, with his most engaging monologue happening during a creative photo session with Life magazine. The notable thing about this trio of men – Robert, Davis, Cocteau – is that Davis and Cocteau are pretty interesting, while Robert isn’t. We hear him work his way through a tedious recording session for the documentary while watching images of Davis’ former lover, Juliette Gréco, flicker on the wall. We hear uncomfortable phone conversations with an operator, a front-desk clerk, a hypnotherapist and the ex who shattered his heart. In each of these cases, the constraints of the solo show are apparent as he must repeat what the invisible person has said in some way for our benefit. 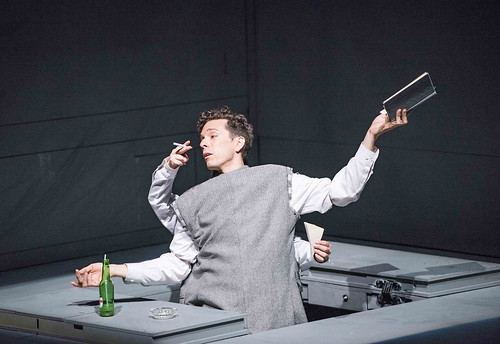 While the narrative of the piece, which also encompasses Davis’ battle with heroin (apparently Cocteau also battled opium addiction much of his life), never comes across as terribly cohesive or even compelling, Lepage’s visual storytelling is mind blowing. With his team from Ex Machina, he has created a show that doesn’t really need dialogue. I’d have probably been just as happy, if not happier, to watch the show unfold with only Davis’ music to accompany it. It’s something along the lines of high art/high intellect meets theme park razzle dazzle, which is a surprisingly tasty combination.

Set designer Carl Fillion has created a tiny rotating space at center stage: it’s three sides of a cube, and the action is confined almost entirely on, in or around the cube, with minimal activity (like a brief image of Gréco in a bathtub) happening on the floor of the stage. Actors are harnessed to or dangled above the cube, and the space becomes a hotel room, the streets of New York, outer space, the streets of Paris, a recording studio, a concert hall and various unnamable psychic spaces occupied by artists, addicts and the lovelorn. Images (by Lionel Arnould), both still and moving, are projection mapped onto the cube with astonishing precision and variety to help define all the different locations, and the acute lighting by Bruno Matte and sound design by Jean-Sébastien Côté further sharpen and deepen the theatrical experience. Director Louis Malle even appears briefly through the magic of projection to talk about hiring Davis to score his movie Elevator to the Gallows.

Doors and windows and trapdoors continue appearing the walls of the cube. Beds and lamps and chairs suddenly appear and then just as suddenly disappear. Cocteau, seen hovering in space, even appears to dive into a hole in the floor. It’s all astonishing and marvelous and dazzling – so much so, in fact, that all the other details, like the characters and their lives, can’t help but pale in comparison. But for about 95 minutes, Needls and Opium is like an extraordinary hallucination, a vivid dream whose details vanish but leave a sense of wonder in its wake.