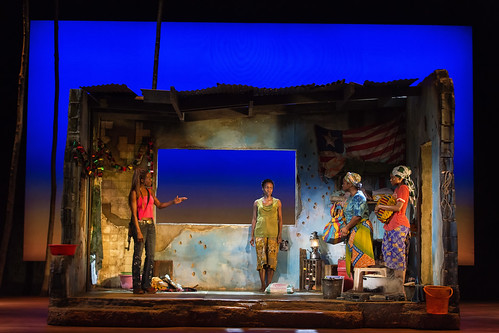 The history of humanity has not been kind to either of those groups, and Gurira offers a stark reminder that our so-called evolution hasn’t progressed very far. Set in the early 2000s in the final days of Liberia’s second civil war, the play examines war from the point of view of women, specifically four women who are essentially sex slaves to an unseen Commanding Officer. One of the unnamed “wives,” as they are known, has turned herself into a fierce soldier fighting for the CO’s rebel group, while another, at 15, is new to this hideous world but like the women around her, she’s figuring out how to survive.

Only the second production at the stunningly refurbished Curran Theatre, Eclipsed follows a triumphant Fun Home and serves as an indicator of the kind of shows the Curran and leader, Carole Shorenstein Hays will be bringing in: important, powerful and risky. You don’t go to a play like Eclipsed for a rollicking good time. This is impeccably produced theater, but it’s challenging and disturbing. The play was first produced at the Public Theater in 2015 before moving to Broadway last year. That’s the production, with some of the actors who were involved with the show in New York, now at the Curran, and it’s a historic production: the first Broadway play to have a cast, playwright and director who are all black women.

Director Liesl Tommy, who was briefly the associate director at Berkeley Repertory Theatre, keeps the focus on the women but relies on set designer Clint Ramos (who also won a Tony for the vibrant and varied costumes) to convey the stark reality of the bullet hole-riddled shack in which the wives live and work (they do the CO’s cooking and his laundry). The lighting (by Jen Schriever) and sound (by Broken Chord) conjure some of the natural beauty of the land, but they really come into play as the story intensifies and the harsh reality of war becomes more vivid. 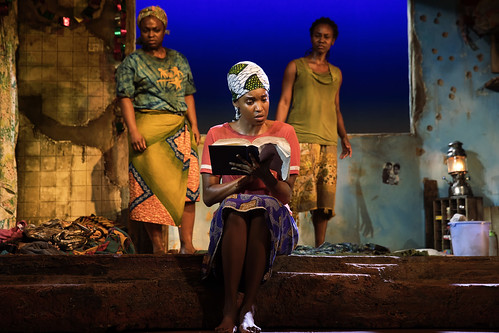 Though an ensemble piece, the story’s trajectory follows the character known simply as The Girl (Ayesha Jordan), who is hidden by the other wives #1 (Stacey Sargeant) and #3 (Joniece Abbott-Pratt) to keep her away from the CO, but he finds her and makes her Wife #4. Unlike the other women around her, The Girl has had some education and can read (she entertains the other wives by reading from a tattered book about Bill Clinton). Her intelligence makes her susceptible to Wife #2 (Adeola Role), who has gone from enslavement to ferocious militarism. With her gun slung across her shoulders and a kind of power the other women cannot access, The Girl sees the advantages of becoming a fighter. As we see, those advantages come with tremendous cost.

The outside world is represented by Rita (Akosua Busia), a member of the group Women of Liberia Mass Action for Peace that is attempting to negotiate a ceasefire among all the warlords. She represents not only an escape route for the women but a strong maternal force attempting to reconnect them to their humanity (and the names they were born with, which have ceased to be used).

What’s deceptive in Act 1 of this nearly 2 1/2-hour play is that its rhythms feel natural and familiar: women talking, working, squabbling and joking. Then, when one of them is selected by the CO to satisfy his sexual pleasure, we’re reminded what’s really going on. These women (one of whom is pregnant) are prisoners and subjected to sexual assault on a regular basis. The fact that they are managing some semblance of normal existence together is astonishing. Things become more harrowing in Act 2, and Jordan especially as The Girl, is so powerfully good it’s almost hard to breathe watching her struggle through her attempt to reconcile her anger and ferocity with her basic humanity.

All the performances are wrenching, but they have to be. The glimmers of hope here come from the way the women care for each other and from the possibility that even in the worst of circumstances, all is not completely lost. During an eclipse, after all, light is only blocked temporarily.