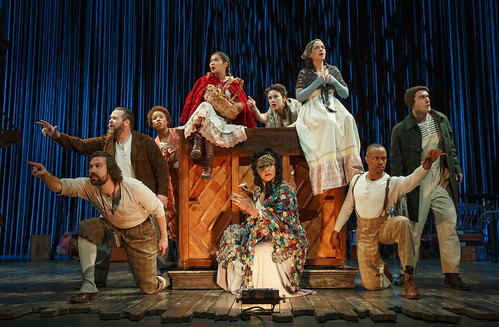 The company of Into the Woods, a Fiasco Theater production that is part of the SHN season at the Golden Gate Theatre. Below: Lisa Helmi Johanson as Little Red Ridinghood and Anthony Chatmon II as The Wolf. Photos by Joan Marcus


You’ve journeyed Into the Woods, but you haven’t ever been into these woods.

When great musicals are revived, the first question has to be: why? Is it going to be another retread of a successful prior production? Or will it be a reinvention, a new take for a new time? Happily the latter is the case with the glorious Fiasco Theater re-imagining of Stephen Sondheim and James Lapine’s Into the Woods. This production, which debuted at Princeton’s McCarter Theater four years ago, is an unlikely candidate for a national tour, what with its stripped-down aesthetic and bare minimum cast – 10 performers, one pianist. But this show, which is coming to the end of its tour, dazzles in ways far beyond the whirligigs of massive sets and effects and the aural gleam of synthesizers or the blast of a full orchestra.

Part of the SHN season at the Golden Gate Theatre, this Woods might seem far too small and intimate for such a large house, but with an assist from set designer Derek McLane, who uses ropes and piano parts to create a sense of someone’s cavernous junk-strewn attic, co-directors Noah Brody and Ben Steinfeld create a storyteller’s version of a show about the stories we tell. This is the kind of revival that makes you wonder if this is, at last, the telling of this particular story that was always meant to be. Strip away all the excess and just let Lapine’s sturdy book and Sondheim’s gloriously clever, powerfully moving score do the work they were intended to do.

Of course words and music could fall flat without the right performers to bring them to life, and Fiasco’s 11-member ensemble rises to the challenge of the show and then some. This is truly an ensemble, which feels exactly right for a show whose standout anthem is “No One Is Alone.” Every actor plays multiple roles. Every actor provides sound effects. Every actor helps pianist/music director Evan Rees fill out the score by playing, among instruments, cello, bassoon, guitar, French horn, penny whistle, trumpet, toy piano and baritone horn. My one concern about this production heading into it was that the rich score would feel too spare with only piano accompaniment, but I needn’t have worried. The show sounds different to be sure, but it sounds great and perfectly suited to this telling. 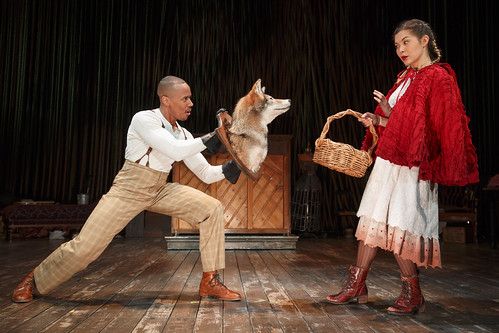 Lapine’s structure, which was obliterated in the lush, ultimately unsatisfying 2014 Disney movie version, takes advantage of the two-act structure to give us a Grimm mashup in Act 1, with Cinderella, Rapunzel, Jack of beanstalk fame and an invented Mr. and Mrs. Baker scurrying through the woods, intersecting, clashing and causing general fairy tale mayhem on the way to their respective happy endings. Then, in Act 2, they get to the crux of the matter: what happens after happily ever after when no one is really satisfied, no one’s longing is really sated and there’s no such thing as happy, let alone ever after.

The massive amount of storytelling in Act 1 can grow cumbersome, even in the finest productions, but Fiasco solves the problem through the speed and time saved not having to worry about bulky sets and costumes. The actors convey everything they need to convey through the simplest means – Cinderella’s ugly stepsisters are “costumed” by curtains on a rod; Jack’s beloved cow, Milky White, is played by the expressive (and scene-stealing) actor Darick Pead, who also plays a stepsister and Rapunzel’s Prince. Birds are folded pieces of paper. A hen is a feather duster. The characterizations are so crisply delineated that even at high speeds, there’s never any confusion – rather the story seems even more filled with humor and spark.

Because this is a genuine ensemble, it’s hard to spotlight specific performances. Stephanie Umoh as the witch is especially powerful after the witch regains her youth and beauty but loses her magical powers. Patrick Mulryan as Jack sings a stunning “Giants in the Sky,” and as previously mentioned, his relationship with his old cow is the source of great humor and surprising poignancy. The princes’ duet on “Agony” is often a highlight of the show, and that is true here thanks to Anthony Chatmon II (who is also fantastic as the Wolf in “Hello, Little Girl”) and Pead. Lisa Helmi Johanson is equally striking as Little Red Riginghood and as Rapunzel, and Evan Harrington brings strong emotion to the Baker’s “No More,” which is matched by Eleasha Gamble as the Baker’s Wife delivering the emotional goods on “No One Is Alone” after the plaintive humor of “Moments in the Woods.”

A special shout-out to lighting designer Christopher Akerlind for the astonishing things he does with the wall of ropes at the back of the stage (which look like taut wires in a piano). He also evokes the terror of a giant causing carnage and mayhem with simple but incredibly effective blackouts and flashes.

The contrast between light and dark, silly and somber, archetypal and flesh and blood has never been more distinct than it is here, and the darkness, which is usually saved for Act 2 can be felt from the start, and conversely, the humor that is usually contained in the first act flares throughout the show. But it’s the ensemble nature of the show that really pays off here. Not only are all of these performers electrifyingly good, they work beautifully together. They are inspiring. And, at the end of the show, that’s the whole point. We get through it together more effectively than we do on our own. It’s not touchy-feely preaching. It’s practical; it’s soul deep; and we’re listening.

FOR MORE INFORMATION
Stephen Sondheim and James Lapine’s Into the Woods continues through April 2 at the SHN Golden Gate Theatre, 1 Taylor St., San Francisco. Tickets are $60-$275. Call 888-746-1799 or visit www.shnsf.com