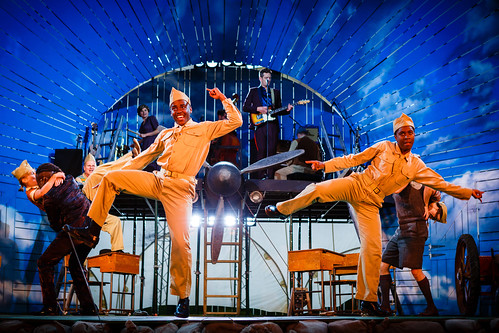 Adi (Ncuti Gatwa, left) and Harry (Nandi Bhebhe) in 946: The Amazing Story of Adolphus Tips, a Kneehigh production at Berkeley Repertory Theatre. Below: Katy Owen as Lily, with her cat. Photos by Steve Tanner


Spirits are high at Berkeley Repertory Theatre this holiday season. What’s interesting is that the merry-making on stage in 946: The Amazing Story of Adolphus Tips – the singing, dancing and general revelry – is all in service to a story about war and a little-known and avoidable tragedy that cost nearly 1,000 during World War II. So it’s happy about sad, which makes sense given the theater company at work here is Kneehigh, the Cornwall-based troupe that has made various Bay Area splashes at American Conservatory Theater and Berkeley Rep (The Wild Bride, Tristan & Yseult). Their work is marked by a certain exuberance that combines song, dance and storytelling with a powerful sense of true experience. From our limited perspective here (we haven’t seen, unfortunately, all their productions) The Wild Bride remains the benchmark toward which all their productions must aspire (read my review here), and though the new show has “amazing” in its title, the work, as enjoyable as it is, doesn’t quite get there.

Like the other Kneehigh shows we have been lucky enough to see, Adolphus Tips is directed by Emma Rice, who is currently the artistic director of Shakespeare’s Globe in London (she’s actually leaving in the spring of 2018 after only two years – that’s a whole other story). Rice is one of those directors whose vision and energy and good taste in actors, designers and music makes you want to experience everything she does, and if this ride isn’t as wild as her Bride, it still has an awful lot to recommend it.

As ever, the presentation is simple and straightforward. The set, a giant starburst bandshell (by Lez Brotherston, who also designed costumes) sits at the center of the Roda stage surrounded by sandbags (there’s a war going on) and a central playing area that is primarily the farmhouse where 12-year-old Lily lives with her mum, grandpa and ever-disappearing cat named Tips. Lily’s dad is off fighting the war, and the arriving American troops are going to evacuate everyone from Lily’s town, Slapton Sands, so they can rehearse their water landings in preparation for D-Day. 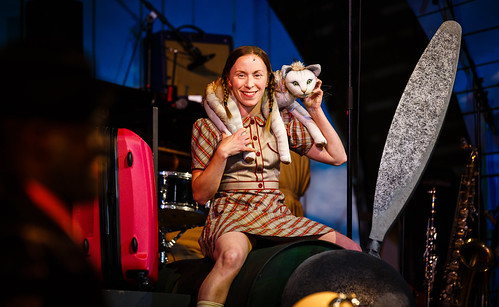 Because the story is told from Lily’s point of view (via the diaries a grown-up Lily gives to her grandson), we only get a slice of all this, but it’s an intriguing slice, especially with the arrival of two African-American GIs who befriend Lily and her family.

This story, adapted by Rice and Michael Morpurgo (War Horse) from Morpurgo’s novel, isn’t’ so much about the loss of life that shouldn’t have happened but more about how war is seen through the eyes of a child. In this case, that’s Lily, played with rambunctious glee by Katy Owen, and she mostly cares about her cat, represented by a puppet, although one not nearly as appealing or as carefully manipulated as the puppet of the dog who herds sheep on the farm (Sarah Wright is credited as the puppet director). Lily spends much of the play’s 2 1/2 hours shouting for Tips, but she does get mightily distracted by Barry (Adam Sopp an evacuee from the London blitz who ends up in Lily’s class, which happens to be taught by a lovely Jewish refugee from France (Emma Darlow as Madame Bounine).

Boys and cats rule Lily’s world, and then she meets Adolphus (Ncuti Gatwa), whom his friends call Adi, and soft-spoken Harry (Nandi Bhebhe). Their exuberant entrance, full of irresistible swing dancing and high kicks, all but ensures that they will be adored by all who know them. How their fates intertwine with Slapton and Lily makes up the bulk of the show, which bounces from the present to the past and back to the present, all accompanied by a band that continually adds or subtracts members depending on which actors aren’t involved in a scene.

This may be a play, but it’s a play with an awful lot of music. Some of it is original (by Stu Barker) and some we’ve heard before (“Leaving on a Jet Plane,” “Born to Be Wild”), and it’s all highly enjoyable. There’s even a sing-along “Swing Low Sweet Chariot” at the top of Act 2 that is a lot more fun than it sounds (as is the dance-along at show’s end). Why is there a band and a blues singer (Akpore Uzoh) presiding over this war story full of puppets (sheep! chickens! a boy playing with a soccer ball!), adults playing children and small-town life mashed up with large-scale tragedy? Because this is a Kneehigh show, and a band adds bounce and humor and fire and, on occasion, a tender moment.

Rice directs with her customary brilliance and attention to detail, and her ensemble is as endearing as it is energetic. A standout for me is Ewan Wardrop pulling double duty (they all do) as Lord Something-or-Other, whose horse riding skills have to be seen to be believed and as Mrs. Turner, Barry’s enthusiastic mum up for a visit from London. Gatwa and Bhebhe shine as Adi and Harry, and Mike Shepherd as a motorcycle-riding granny is priceless.

If all the pieces don’t add up to something moving, if all the skittering and scattering obscure a story that lacks depth, there’s still an awful lot of good stuff here. War may be hell, but as seen through the Kneehigh prism, it’s full of sweet fun, fun for all ages.