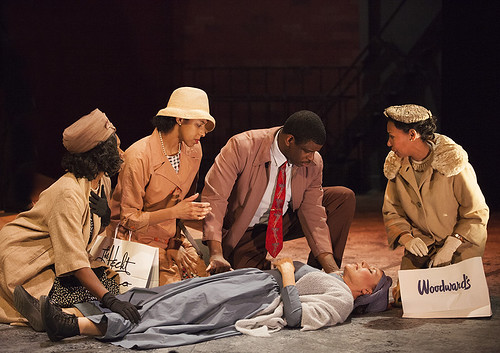 
What you remember from Word for Word’s production of All Aunt Hagar’s Children, a full theatrical adaptation of the short story by Edward P. Jones, are the women. Such women. They make an impression on the audience the way they make an impression the story’s narrator, a nameless young man who returned to his native Washington, D.C., nine months ago after serving in the Korean War.

The young man is in a transitional phase, working a file clerk-type job until he can join a war buddy in Alaska and strike gold, but mostly he’s giving himself license to celebrate (i.e. drink) and dream of a life beyond what he already knows. As he puts it: “And I, a veteran hearing Alaska singing, didn’t want to ask any big questions and didn’t want anybody asking me any big questions. I was twenty-four and just starting to dance away on the easy side—a little soft-shoe here, a little soft-shoe there.”

Living a quiet, alcohol-soaked life isn’t quite panning out for the young man. Drama finds him in the form of a strange incident involving a Jewish woman who practically dies in his arms on the street, muttering an enigmatic Yiddish phrase with her final breath. And in the form of a murder that he reluctantly agrees to help and solve.

With that latter, Jones’ story falls into some familiar, noir-ish rhythms, although the young man, who worked as a military policeman in Korea, is not at all a detective. What his investigation does is let him cross paths with some extraordinarily interesting women, and that’s where the heart of the story lies.

As in all Word for Word productions, the company has not changed a word of Jones’ story, which originally appeared in the New Yorker in 2003 and then served as the title story in a collection of his short stories in 2006. A Pulitzer Prize-winner for his novel The Known World, Jones delivers an unusually told story that is both intimate and epic, a short story that feels crammed with incident and history and interpersonal connections. It’s one man’s story that is continually taken over by the women he encounters, some of whom are close family members, others he barely knows and still others who are strangers on the street. 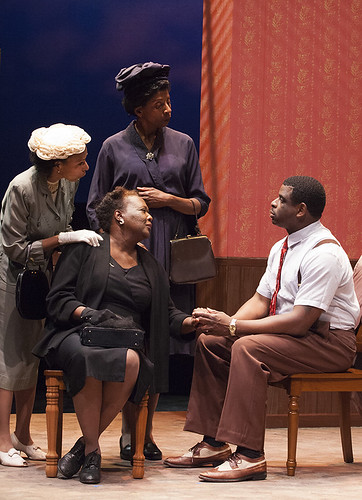 Director Stephanie Hunt (working with co-director Margo Hall, who is also a standout in the uniformly strong cast) has the disadvantage of working on the cavernous main stage at Z Space rather than the more intimate Z Below in the basement. Set designer Sean Riley creates a striking image of brick buildings in a northwest Washington neighborhood, but most of the action is confined to a much smaller platform plagued with door frames whose logic is not always observed by the actors. There’s a lot of time spent bringing furniture on and off this platform, which tends to slow the action.

And if there’s one thing plaguing this 100-minute one-act production it’s pacing and a tendency to be too literal in the interpretation of Jones’ prose. The writing is evocative enough without having to see every little thing (especially at the end with a striking image that is probably best left to the imagination rather than being rather clumsily realized).

Khary L. Moye makes for an arresting narrator who is at once charming in his assessment of his life and surroundings and confounded by the same. Except for Joel Mullennix in a series of smaller roles (a nefarious bad guy from the past, the young man’s lawyer boss), the other six members of the cast play all the wonderful women our narrator encounters in his quest to solve a mystery and discover the meaning behind the words uttered to him by the dead white woman he tried to help.

Velina Brown is piercingly funny and moving as the young man’s mother, a stern, sharp-tongued woman with a deep love for her children and her two best friends from childhood (Hall as Aunt Penny and Edris Cooper-Anifowoshe as Miss Agatha), with whom she suffered some significant trauma as little girls in Alabama. The ghost of that trauma haunts the present (1950s) narrative in a most intriguing way.

Sheila Balter plays both of the Jewish women who factor into the young man’s intrigue: the woman who dies on the street and the woman who connects him to the dead woman’s final words. Just as the connection with his mother’s past weighs on the young man, so does his post-World War II interactions with these two very different Jewish women. Nothing is overly explicit in Jones’ writing here – it all adds to the emotional, cultural and even historical complexity of the young man’s experience.

Many of the other woman are those who assist in the murder investigation in some way. Hall is hilarious as Minnie, a neighbor of the murder victim who’s skill at flirtation is almost as pronounced as her talking bird’s ability to surprise with bizarre exhortations (“I’m only flesh and blood” or “There’s more to come, somebitch!). Kehinde Koyejo memorably plays the bird.

Jia Taylor plays the romantic interest from whom the young man is uncomfortably trying extricate himself as well as one half of a duo (Koyejo plays the other) who help the budding detective the trajectory of his investigation (he hasn’t quite figured out that he should visit the scene of the crime even though it happened some two years ago).

Storytelling is important to characters in All Aunt Hagar’s Children, just as their stories themselves are powerful in the telling. One character says of her father, “He used to tell me stories when the world got too much. Comforting, you know. Keeping the world away.” Jones’ has that effect while also bringing the world in closer for a better, more intriguing view.