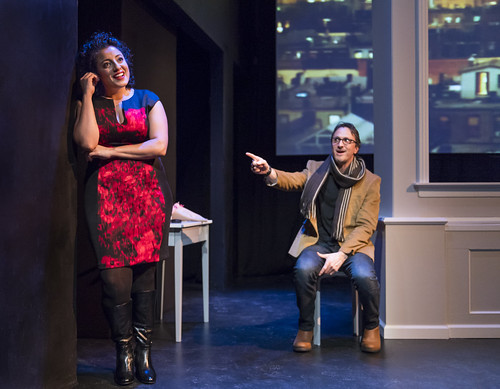 
When you go to a show from a specialized company like Golden Thread Productions, which focuses on plays from and about the Middle East, you expect your perspective to be expanded, to have your assumptions challenged and to encounter voices you may not hear enough. In its 20 years, Golden Thread has earned a strong reputation for accomplishing all of the above and more with more than 100 new plays produced and truly enlarging the conversation about the Middle East to include a diversity of artists, experiences and points of view.

With Golden Thread’s latest production, Our Enemies: Lively Scenes of Love and Combat by Yussef El Guindi, the conversation about the Middle East is front and center as a Muslim American writer attempts to find her voice as a writer, publish a novel, maintain a relationship, combat stereotypes about Muslims and live her life with some degree of enjoyment, engagement and self-respect. But because this woman, Noor, is so beautifully drawn, we don’t see her simply as a spokesperson for her birth country or her religion or for all writers or all women. Rather we see her as Noor, an incredibly intelligent woman of complexity and beauty and talent and sensuality and temper and flaws.

Much of that richness comes from El Guindi’s script. The rest comes from the sublime performance by Denmo Ibrahim, an actor of commanding presence and depth. All the characters in the play are interesting and multi-dimensional, but Noor is the passionate center, even though not all the characters – notably the head of a Mosque and his son – interact with her directly. Hers is the strongest, funniest, most impassioned voice, even though others might shout more loudly. And here’s a triumph: we actually watch a writer write and it’s INTERESTING! 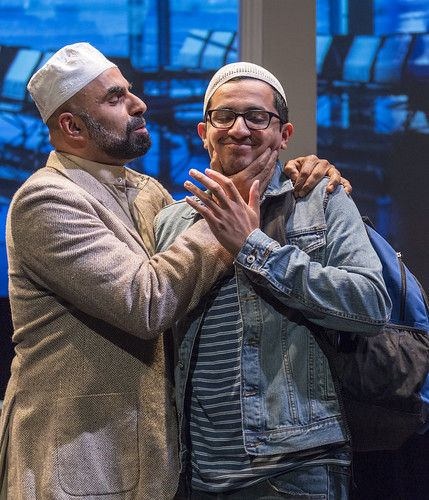 The play’s subtitle, Lively Scenes of Love and Combat, turns out to be quite an accurate description of the two-plus-hour play, though the combat ends up being more lively, especially the battle between Noor and Mohsen (Kunal Prasad), a successful Egypt-born Muslim writer now living in the United States. His publisher (Annemaria Rajala) is interested in Noor’s manuscript (only if she can rewrite it to reflect more of the heroine’s Egyptian-American experience), so he’s recruited to woo her into the publishing house fold. The problem is that Mohsen has become a popular talking head representing the Muslim-American experience in the nauseating 24-hour news machine, and the viewpoint he espouses does not sit well with Noor or her combustible boyfriend, Gamal (James Asher). When Mohsen and Noor meet at a dinner party, the play crackles with intensity as their differing ideologies about how to represent their shared culture clash.

At least Noor is capable of having an intelligent, mostly civil conversation with her adversaries. Gamal, on the other hand, is becoming a loose canon who’s beginning to scare himself. The play opens with Gamal cleverly sabotaging one of Mohsen’s TV appearances, and the success of that disruption leads him to another involving Sheikh Alfani, the head of a local mosque who has also become a go-to guy when the media needs a Muslim representative.

Playwright El Guindi allows us to get to know these multifaceted characters more than we might in another play this full of action, which means that we see Sheikh Alfani (the superb Munaf Alsafi) not just as a victim of one of Gamal’s “pranks” but also a compassionate community leader and a loving father to his son, Hani (Salim Razawi), who will soon be making his first visit to see his extended family in Cairo. The father-son dynamic is powerful here, and in a series of scenes, most notably their goodbye at the airport, Hani’s first ecstatic, detailed report about his experiences in Cairo and his father’s emotional plea for him to return, we sense generations passing, culture evolving and depthless love existing alongside sorrow and fear.

This is a remarkable play for many reasons, not the least of which is its ability to deliver potent, emotional characters and a plot in which surprising things happen (and just a side note: how refreshing it is to experience a play where things actually happen!). There’s sex, deep rumination, harsh conflict, galvanizing anger, violence, manipulation, lying, fierce intelligence, incisive criticism and genuine affection. Director Torange Yeghiazarian and her tremendous actors throw the conversation wide open and invite the audience to be active participants in the drama. The elegant, simple set by Mikiko Uesugi allows for quick scene changes abetted by the effective background projections of Kevin August Landesman, and the pace never lags.

We care about El Guindi’s characters as people making their way in the world, even the ones we may not like much (like the pompous but somehow sweet publisher played by Dale Albright who practically fetishizes all things Egyptian). That makes for powerful, unforgettable theater, which ends up feeling an awful lot like the rich, frustrating and head-spinning love and combat of real life.