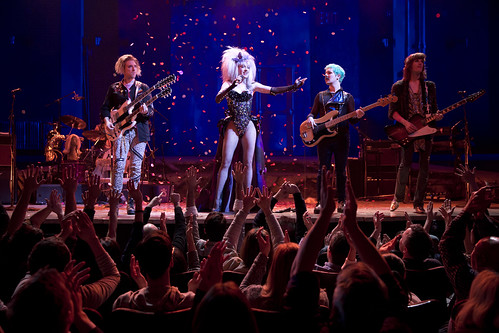 
The coolness of Lena Hall and Darren Criss relates directly to the city of their birth. The two performers, one a Tony Award-winning Broadway star and the other a former object of “Glee” affection, are headlining the Broadway tour of the raging rock musical Hedwig and the Angry Inch, which begins Sunday, Oct. 2 at the Golden Gate Theatre in their hometown, San Francisco.

In advance of the tour launch and its stars’ homecoming, SHN, the resident producer, held an onstage conversation for its subscribers and guests with Hall, Criss and Hedwig composer/lyricist Stephen Trask. The event featured a chat with interviewer Adam Savage (of “MythBusters” fame) and there was music from the show. Here are some highlights, including video footage of both musical performances.

Lena Hall was a cat who rocked: Hall was on Broadway in Cats when she saw Hedwig in its off-Broadway run starring its co-creator John Cameron Mitchell. “I had no idea what the show was and just showed up at the Jane Street Theatre and literally had my mind blown,” Hall says. “By the end my hands were in the air, I was sobbing. I got the cast album immediately and listened to it for years straight. It was the first time I had seen a piece of theater that broke the mold of what I thought musical theater had to be. It was the first time I had seen rock music truly represented in perfect form in a theater piece. That was so exciting for me as a nerd rock kid – both loves combine din one piece. To this day, that cast recording is among my favorites.”

Stephen Trask on the origin of Hedwig and “The Origin of Love”: Collaborating with Mitchell on what was going to be an autobiographical piece about past lovers, Trask had already written “The Origin of Love” (inspired by a story in Plato’s Symposium), but then the project stalled. “John was talking about his life, and I was taking notes on a legal pad when he started talking about a babysitter he’d had who lived in a trailer. He would go to her trailer and act out songs and dance for her, and she would give him vodka. she also had a lot of dates, which was weird because she wasn’t attractive and she didn’t always know who the dates were. The dates would come to the trailer, and they’d peek out at them. If they looked OK, John would run out the back door, but if the date didn’t look OK, they’d both run out the back door. I was working at a drag club called Squeezebox every Friday night doing punk rock, and one night, we brought in a song we’d written, ‘Wicked Little Town,’ thinking that the babysitter character would be one of the main character’s past lovers and appear in one scene. It was an instant hit. We started getting bookings in clubs, so we wrote more until it became obvious this character was going to be in more than one scene.” 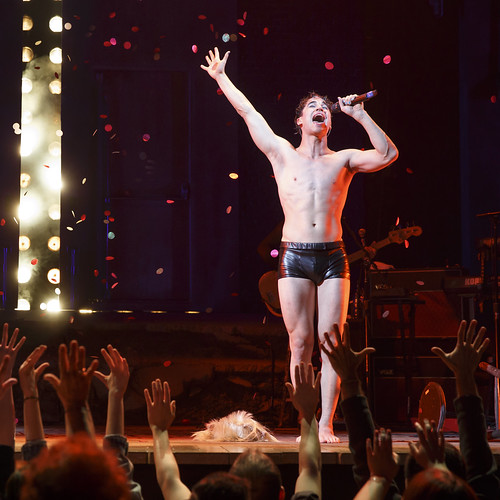 Darren Criss did not shower with Stephen Trask to get this job.: While attempting to shower Trask with compliments, Criss made what he called a Freudian slip and said that he had showered with Trask, which got a big laugh. That then became a running joke about how Criss ended up playing Hedwig on Broadway (following Neil Patrick Harris, Andrew Rannells, Michael C. Hall and Mitchell himself (after Criss, Taye Diggs closed the show). The real story is that Trask saw Criss at the Broadway opening night and asked him to do it. Trask says the extent of Criss’ audition was him saying, “Let me check my schedule.” Criss is a little more serious about tackling such a daunting role as Hedwig, an immigrant from East Germany, a person who is a unique gender unto her/himself and who expresses the deepest of emotions through searing and tender and kick-ass and deep rock ‘n’ roll songs. “Inevitably, everybody who has ever played Hedwig is part of this narrative,” Criss says. “The team, right down to costumes and producers, has been pretty much the same since off Broadway. When someone says so-and-so did this, I don’t take offense. It’s part of the throughline. Not every Hamlet willl have talked to every other Hamlet, so the fact that I get to do this is really cool. I don’t know what I specifically bring to it. The coolest feedback I’ve gotten was one day on Broadway, a Wednesday, a two-show day. Afterwards, one guy says, ‘You’ve got to be the meanest Hedwig I’ve seen.’ Then, further down the line, another guy says, ‘You’re one of the sweeter Hedwigs.’ I think that’s probably the variable of the audience. That give and take can yield certain attitudes sometimes. Each show really is different.”

Lena Hall gives the best audition ever. So good they teach it in classes.: Hall calls her audition epic, and she means it. Though she was in a hit show, Kinky Boots, Hall knew she wanted to be in the Broadway production of Hedwig. “No ifs, ands or buts,” she says. “To audition for Yitzhak, I showed up as a man. Brought my guitarist from my band to be my accompanist. He went in first, I followed with my Marshall amp. We plugged in and I sang a song that was not on the audition list, Lita Ford’s ‘Kiss Me Deadly.’ Then sang ‘The Long Grift’ from the show. At my final callback, I did all material from the show. The instructions were to tell a story, tell a joke and never break character. They would ask me questions and I would improv a scene with John. I was such a fan that even being in the room with Stephen and John was heart attack city. So, on a Wednesday, between the matinee and evening show, I got into my Yitzhak drag and told a story about Yitzhak coming from a small town in Croatia, the sole producer of the yak hair used in the costumes made for Cats. It was a boomtown, which is how I knew about theater. The town went under when Cats closed on Broadway and his mother, who hoarded yak hair and made a sofa out of it, died in a fire after smoking a cigar. All that was left was a cassette of the Rent cast album. Yitzhak saw that as a sign from his mother to follow his dreams to Broadway. He shows up at the theater, but Rent has been replaced by Newsies. So my idea was this: I would get the audition room to donate to my Kickstarter fund to bring Rent back so I could play Angel. I made a 2 1/2-minute video, which I played them on my laptop. The whole time I’m thinking, ‘This is brilliant. I’m nailing it. But there was not a sound. Nobody laughed. John Cameron Mitchell made a sort of a noise at one point. Then I figured I bombed, blew it. I did my songs. Did my improv with John, which involved him kissing me. I was late for my half-hour call back at my show.” Of course she got the job. Trask says: “It was the best audition ever. People look at the tape of that audition and show it in acting classes. That’s how to audition for a show. Literally the best audition ever.”

We don’t like to talk about Ally Sheedy: Hall is making Hedwig history by being the first woman to play Yitzhak and Hedwig in the same production. She’ll take over the lead from Criss once a week. She’s not the first woman to play Hedwig, however. That honor fell to Ally Sheedy of The Breakfast Club fame. “They don’t like to mention Ally Sheedy,” Hall says, to which Trask adds, “She did Alley Sheedy for three hours in a modified Hedwig costume.” Criss says: “No one is more qualified than Lena Hall to do this. She’s like our next president: she’s been around, knows what to do and is, in fact, overqualified. I hope you all get to see her perform.”

And finally, here is Lena Hall, butt naked: Once again referring to how Criss showered with Trask to get the job, Hall says she has a story about the first preview of Hedwig on Broadway. “We didn’t know how it would play with the audience, and it was mind blowing,” Hall remembers. “I’m in my dressing room butt naked. BUTT NAKED. Nothing covering anything. I keep it clean down there, so I’m out for the world to see. With not even a knock, Stephen and John walk in. ‘You were so great!’ And they hug me. Finally I look at Stephen. He looks down. ‘Can you guys leave? Can I put a robe on?’ ‘Oh, we don’t care,’ they said. ‘I care!'” Next stop, Tony Award for featured actress in a musical.

1 thought on “Local kids make good, rock out in Hedwig”