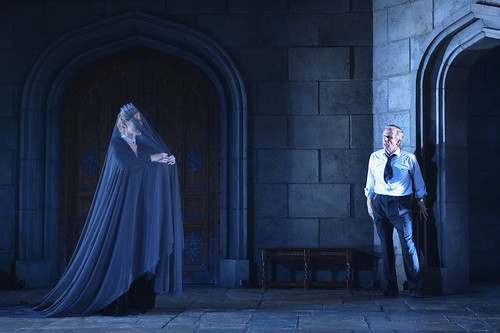 
What will happen when Queen Elizabeth, Great Britain’s longest reigning queen, leaves the throne? In a hefty helping of royal speculation, playwright Mike Bartlett takes on that question, but does so by way of Shakespeare with a soupçon of Notting Hill.

The result is King Charles III a new history play that traffics in family drama, parliamentary procedure, the liberties of the fourth estate and everything we think we know about Charles, Camilla, William, Kate and Harry. There’s sensation and substance, comedy and some genuine emotion mixed in with provocative observations on the relevance of the monarchy in the 21st century.

This American Conservatory Theater season opener is a co-production with Seattle Repertory Theatre, where it heads next, and Washington, D.C.’s Shakespeare Theatre Company, where it opens shortly after the presidential inauguration, and it’s thrilling to be part of a history play (imagined history, but still) in which we feel invested, well, invested to the level of our personal Anglophilia (my level, for instance, begins with collecting coffee table books about Princess Diana at age 13 and just tea-and-crumpeting on from there).

It’s also thrilling to hear Bartlett’s attempt at being a modern Shakespeare come so completely to life. His ambitious script comprises blank verse meted out in iambic pentameter, and while you’re aware of the language being rather vaulted or twisted into the occasional Shakespearean turn of phrase and in the rhymed couplets that end scenes, there’s a rhythmic realism that makes this feel like something nestled comfortably in between a kitchen sink family drama and King Henry VI, Part 2. If we’ve learned anything from Shakespeare, it’s that royals should not speak like the rest of us, especially when occupying a stage and behaving as if they’re the most important beings on the Plantagenet, sorry, planet. 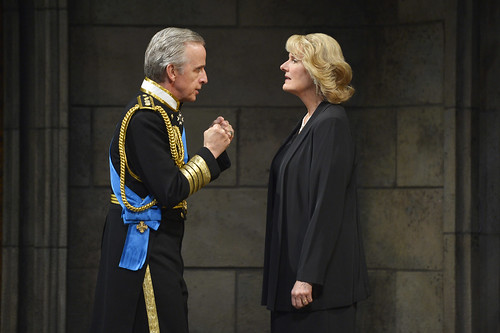 King Charles III is nothing if not juicy. Who doesn’t love seeing horsey Camilla Parker-Bowles slap a royal child or Prince Harry clubbing with his coke-snorting friends? Even as those of us who devour all things royal revel in the mon-arcana of it all, Bartlett and director David Muse take these proceedings veddy, veddy seriously, as they should. The Queen is dead, after all, and Charles, so long in waiting and with his own distinct take on what role the monarchy should play, finally seizes his moment.

Robert Joy plays Charles as something of a fascinating wily clown. He does that huffing and puffing Charles thing, but this observant man is an experienced statesman with a strong conscience and little concern for what his subjects think of him. He’s got a tremendous advocate/body guard in Camilla (Jeanne Paulsen, and it’s clear he adores his children and grandchildren (George and Charlotte are mentioned but, alas, never seen). During his first ceremonial meeting with the Prime Minister (Ian Merrill Peakes, a bill that has gone through Parliament restricting the rights of the press requires his ascent (aka signature). Charles feels the bill goes too far in impinging on free speech, so he refuses to sign it, thus setting of a remarkable series of events that throws England, Wales, Scotland and Northern Ireland into quite a tizzy. The great experiment in parliamentary constitutional monarchy goes incredibly awry when a king ascends who actually wants to wield his power in what he considers the best interest of his loyal royal subjects.

While Charles plays push me pull you with everyone in Westminster, William (Christopher McLinden) and Kate (Allison Jean White) are reveling in being the nation’s darlings and Harry (Harry Smith) is tormented by being the clown prince in his heir-to-the-throne brother’s nobel shadow. To make himself feel better, he goes clubbing with his friends (shades of Prince Hal), but instead of hooking up with Falstaff, he meets an art student named Jessica (Michelle Beck) and they begin the Notting Hill-meets-Love Actually portion of the play as a commoner begins a relationship with terribly famous person.

Traces of Hamlet (Princess Diana makes an interesting cameo) bump up against Macbethian ambition and King Learish child vs. father showdowns, and it all transpires within the walls of Daniel Ostling’s oppressive (and beautifully detailed) set, which feels a lot like Westminster Abbey, where centuries of history hang in the air and are literally buried in the ground beneath. Lap Chi Chu’s lights gracefully transform the gothic space into various Buckingham Palace rooms, a London disco, the scene of public rebellion and, of course, the Abbey itself.

In the end, what makes King Charles III more than just gussied up royal gossip gleefully sifted through an effective Shakespearean filter is that the characters actually emerge as interesting people. In William you can see his father’s intelligence and his mother’s spark. In Harry you see royal duty battling personal freedom and in Kate, perhaps the most intriguing character here, you see someone smart enough to know how the monarchy can survive and thrive and who possesses all the charm and skills to ensure that will happen.

The play’s two hours and 40 minutes doesn’t exactly whiz past, but there’s never a dull moment, and it’s ending is really just the beginning. With any luck, the BBC will pick it up for an eight-part series. Who needs Downton Abbey when you can have Buckingham Palace?