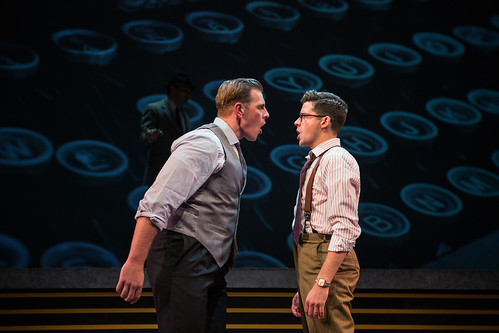 Private investigator Stone (Brandon Dahlquist, left) exclaims to mystery writer Stine (Jeffrey Brian Adams) that he would be nothing without him in the San Francisco Playhouse production of City of Angels. Below: Stine is seduced by movie studio secretary Donna (Monique Hafen). Photos by Jessica Palopoli


It’s real vs. reel in the San Francisco Playhouse summer musical, City of Angels, a delightfully jazzy take on film noir, greed the constant battle between commerce and art.

This 1989 Broadway hit, with a dazzling score by the great Cy Coleman (music) and David Zippel (lyrics) and a genuinely funny book by Larry Gelbart (whose credits include M*A*S*H and A Funny Thing Happened on the Way to the Forum) is a real treat, and it’s nice to see that SF Playhouse’s musicals just get stronger and stronger. Director Bill English marshals his resources effectively and also contributes a set that makes terrific use of rear wall projections (by Theodore J.H. Hulsker) and makes a convincing split between the slimy real world of 1940s Hollywood and the grimy black-and-white world of cinematic private detectives, missing daughters and murderous plots.

Musical director Dave Dobrusky heads an 11-piece band that handles the jazzy riffs of Coleman’s score well and add some nice shiny, brassy blasts to keep things lively. There are torch songs, comedy songs, vocalese numbers and a couple Broadway-style showstoppers, and Dobrusky’s band handles it all with period pizzazz.

At the center of the dueling stories are Stine, the writer (Jeffrey Brian Adams), and Stone (Brandon Dahlquist), the private detective and the creation of the writer. Stine is in Hollywood turning his hit novel into a screenplay for studio head Buddy Fiddler (a robust Ryan Drummond), who likes to put his stamp on everything, from the script to the script girls. Stine is learning the art of compromise in adapting his novel for the screen and watching everything that made the book interesting evaporate as the story transitions to the screen. 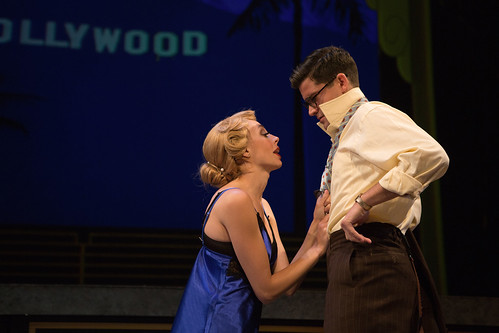 Adams and Dahlquist are both excellent as conflicting aspects of the writer’s personality. Their big duet, “You’re Nothing Without Me,” concludes Act 1 in the bang-up way it should, though the reprise at show’s end doesn’t pack quite the same punch.

Director English tends to underplay the comedy aspect of this musical comedy, leaning more into the shadows of the film noir world instead. This is most apparent in the sterling comedy number “You Can Always Count on Me” sung by the actor playing secretaries to Buddy in the real world and to Stone in the film world. In this production, that falls to Monique Hafen, who performs the number with the brio of a Kit Kat girl wandered in from Cabaret. There’s pathos in the song to be sure, but the dramatic business undercuts the comedy.

The comedy MVP award goes to Nanci Zoppi who plays a wannabe widow in the movie and a studio head’s wife in the real world. It’s the latter role that gives her a chance to add some real comic zest to the show. It’s reassuring when the women take over the stage because, in true film noir and 1940s Hollywood fashion, they’re mostly reduced to sidekicks, bad choice makers, schemers and seductresses (and the choreography has a tendency, especially in Act 2, of sending them down to their knees).

At just over 2 1/2 hours, this City of Angels keeps up a peppy pace, and the set and the sharp performances clearly delineate the increasingly complicated relationships between reality and cinema while the hot band and strong voices give the movie world a nice Broadway bang.