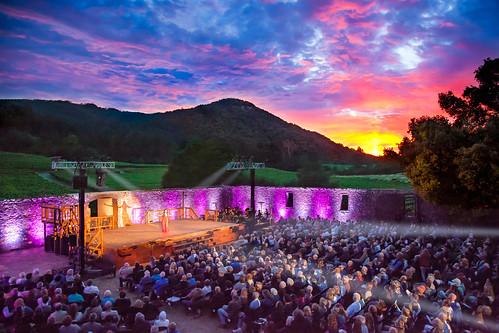 The glorious venue for Transcendence Theatre Company’s Broadway Under the Stars series is the winery ruins in Jack London State Historic Park in Sonoma. The performers, many of whom come with Broadway credits, are often spectacular. Photos by Rebecca Call


Walking into a Transcendence Theatre Company show for the first time two years ago was, well, a transcendent experience (read my review here). Part of that had to do with the stunningly beautiful setting: Jack London State Historic Park in Glen Ellen, Sonoma County. If there’s a lovelier place to be on a summer night, sipping wine, dining from local food trucks and savoring the view, I don’t know it. The other part was the show itself, performed by an energetic, eminently talented company, most of whom hail from New York and touring companies. Show tunes were performed with brio and panache, staging was clever and exciting and the art of Broadway razzmatazz on a wine country summer night hit some glorious heights.

Heading back for opening weekend of the fifth season, much of what makes this such a special experience was in place: scrumptious offerings from gourmet food trucks, abundant (and delicious) wine and scenic beauty that transports you well before the show begins.

The amount of talent within the 25-member company is also, as expected, at an astronomical level, but the opening show itself, dubbed This Magic Moment (running through July 3), is disappointing. Unlike previous Transcendence shows I’ve seen, there’s a level of – I’m sorry to say – cheesiness that smacks of something you’d see in a theme park or on a cruise ship. There are as many pop tunes in the show as there are show tunes, with odes to the Beach Boys and Adele among them, and they inspire flashbacks to Up with People in the ’70s or the Solid Gold Dancers of the ’80s. Those are not comparisons you aim for. 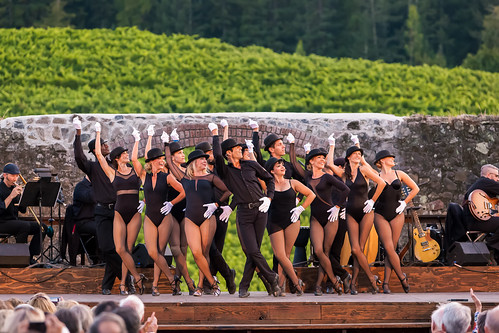 There is still fun to be had, though from the opening number it becomes clear that show tunes are going to be competing with pop throughout the evening as the company mashes up a bit of “Seize the Day” from Newsies with the Pointer Sisters hit “I’m So Excited.” A delightful “A Wink and a Smile,” the Harry Connick-penned tune from the Sleepless in Seattle soundtrack, gives Brooke Morrison and Eric Jackson an opportunity for some vintage-style charm, and then a labored comedy number blends a variety of rock tunes with speed dating.

Lexy Fridell, assisted by the golden-voiced John Yi and the powerhouse Q. Smith, triumphs with Stephen Sondheim’s tongue-twisting “Not Getting Married Today from Company, but then an awkward mash-up of “I Put a Spell on You” and “Love Potion #9” marks the first of a number of forgettable selections perfunctorily staged. Does anyone really care about “The Life I Never Led” from Sister Act or “Get Out and Stay Out” from 9 to 5: The Musical or “The Strongest Suit” from Aida (even when accompanied by an uninspiring “fashion show” set to ’70s mainstays “I’m Coming Out” and “Got to Be Real”)? Perhaps those lukewarm show tunes are only slightly more interesting than a string of pop tunes including One Republic’s “I Lived,” Switchfoot’s “Dare You to Move” Rihanna’s “We Found Love in a Hopeless Place,” Bruno Mars’ “Marry You,” a medley of Beach Boys hits, another medley of Adele hits and Whitney Houston’s super-schmaltzy “One Moment in Time.” It’s not that the songs are bad, necessarily (there are some classic songs in there), but they are performed unconvincingly. Beyoncé’s “Single Ladies (Put a Ring on It)” is performed by members of the male ensemble, a frisky idea that’s actually fun, but it’s couched in some sort of comic idea about an old man in a home reading a poem who ends up dancing in the number, thus blunting its pleasures.

Among the better moments are Nick Dalton and a very pregnant Shannon O’Bryan singing Maltby and Shire’s “The Story Goes On” (from Baby) and “Some Enchanted Evening” from South Pacific earnestly performed by Yi and Michele Maika Berg. The company performs a selection from The Phantom of the Opera (complete with ridiculous jets of stage smoke like something from a Meatloaf concert circa 1977) but unfortunately chooses the absolute worst number from that score, the execrable title song.

Certainly this is all a matter of taste, and after four seasons it’s not surprising that Transcendence is trying new things. The audience seemed delighted by the mix of show tunes and pop, whooping and cheering with gusto, but this kind of slick, schlocky entertainment doesn’t hold a lot of appeal for me. If this were the first Transcendence show I had seen, I would not have returned for more in spite of the wine, the food and the magnificent venue.