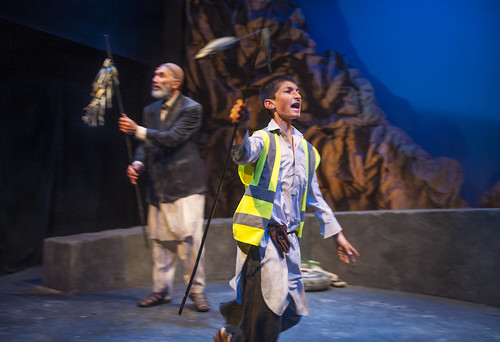 A young man named Traffic (Kiran Patel, right) and a wanderer named Zarif (Terry Lamb) join forces to chase trucks and sell fish on the Kabul-Jalalabad highway in Afghanistan in the world premiere of Kevin Artigue’s The Most Dangerous Highway in the World, from Golden Thread Productions at Thick House. Below: A lost Samira (Sofia Ahmad) stumbles upon Traffic’s makeshift home on the side of the highway. Photos by David Allen Studio


In his raggedy reflective vest and with his small voice booming, Traffic spends his days unlike most 8-year-olds: he waves traffic around a hairpin turn and in and out of a tunnel on the perilous mountain highway that links Kabul and Jalalabad in Afghanistan. He is one of the “Pepsi boys” who scrapes up a living from waving a smashed soda bottle at passing cars, hoping for a few coins thrown his way as a tip. He also catches fish in the river at the bottom of the ravine and attempts to sell those as snacks to passing travelers.

The story of the Pepsi boys is a compelling one – check out this feature in the New York Times – and clearly playwright Kevin Artigue thought so, too. Their lives inspired his play The Most Dangerous Highway in the World, now receiving its world premiere from Golden Thread Productions, the country’s first theater company focused on the Middle East. Now in the midst of celebrating its 20th anniversary, Golden Thread focuses on stories from and about the Middle East, and Artigue is the first writer of non-Middle Eastern descent to receive a full production from the company.

Moving beyond the day-to-day drama of the Pepsi boys simply existing in such a difficult, hardscrabble and dangerous world, Artigue attempts a more poetic approach to the story. His main character, 8-year-old Traffic (played by the extraordinary Kiran Patel), has lost his family – to what is never clear, but the threat of the Taliban and the general volatility of the political landscape in Afghanistan looms heavily at all times – and his sister has recently wandered off and failed to return. Still, Traffic (he gave himself that name) plies is trade with gusto, slinging fish (“You can still eat them if they smell!”) and existing in fumes of exhaust from the cars he guides along their way. 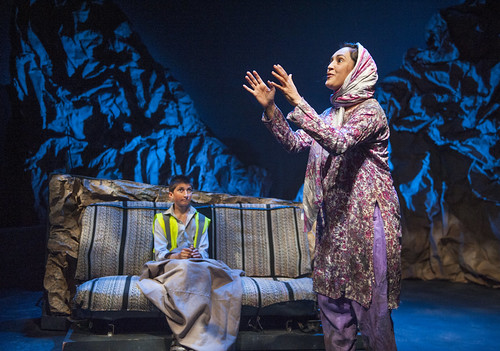 How long Traffic has been doing this and how long he plans to continue doing it is never quite clear. He’s living moment to moment and takes his rest on a salvaged car seat along the side of the highway. He’s existing in a sort of purgatory, and that is made more literal with the presence of ghosts, including car accident victims Zarif (Terry Lamb) and Samira (Sofia Ahmad) who are somehow tethered to Traffic. There are actual humans, too, in the form of soldiers Nader (Davern Wright), a bully who wants information about Taliban movements, and Daoud (Louel Señores), a sweet stoner who is much more compassionate. These soldiers don’t seem to be under any specific command, but they drive a big truck full of bagged and tagged bodies.

Director Evren Odcikin elicits a superb performance from young Patel, who really carries the entire 80-minute drama with his exuberance and his deeply felt connection with Traffic. The other roles, which also include dreamlike appearances by a little girl played by Jiya Khanna, tend to be exercises in repetition. They are ably performed but don’t coalesce into anything substantial.

The same could be said for the play itself, which can become surprisingly mawkish and trite (“You care too much. Life is easier when you stop caring.”). A play populated by the living and the dead doesn’t automatically add up to drama. Why the ghosts are there never becomes clear, and Traffic’s precarious state is no different at the end than it was at the beginning. That could be exactly the point, but the play seems to indicate some sort of movement that is also unclear.

The production itself is a strong one, from the evocative rocky mountain set by Kate Boyd to the nerve-jangling sounds of speeding traffic by James Ard, and though the hard lives of the Pepsi boys serves as a means of providing insight into life in modern Afghanistan, the view on this particular stretch of Highway is much more cloudy than clear.

FOR MORE INFORMATION
Kevin Artigue’s The Most Dangerous Highway in the World continues through May 29 with Golden Thread Productions at the Thick House, 1695 18th St., San Francisco. Tickets are $34. Call 415-626-4061 or visit www.goldenthread.org.