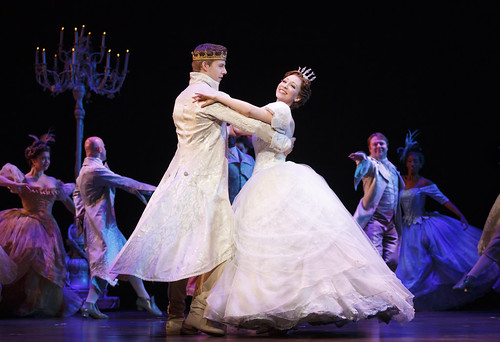 Kaitlyn Davidson is Ella and Andy Huntington Jones is Topher, her prince, in the touring company of Rodgers and Hammerstein’s Cinderella, playing the Orpheum Theatre as part of the SHN season. Below: Davidson’s Ella (far right) must contend with the wicked stepmother and stepsisters played by (from left) Blair Ross, Kimberly Fauré and Aymee Garcia. Photos © Carol Rosegg


There has rarely been a moment when Cinderella’s glass slipper wasn’t the hottest shoe on the market. The Charles Perrault fairy tale is among the most well worn in the storybooks and shows no signs of losing her edge. A great deal of her popularity must be attributed to the Disney machine, er, Studio, which animated the tale in 1950 and then remade it in 2015 as a live-action film (well, a lot of live action and a lot of computer animation and effects). Side note: the geniuses at Disney produced a straight-to-video sequel to Cinderella in 2002 followed by a second sequel in 2007.

Running parallel to the evolution of Disney’s popular princess is the dynamic musical theater duo of Richard Rodgers and Oscar Hammerstein II, who turned Cinderella into a musical for live television in 1957. That broadcast, starring Julie Andrews was watched by some 107 million people (a staggering 60% of the country). The musical leapt to the British stage soon after, and then to American stages in the early ’60s. Capitalizing on that popularity, a second television production was mounted in 1965 starring Lesley Ann Warren, and still a third (much more drastically re-worked with Rodgers & Hart songs added) was broadcast in 1997 starring Brandy and Whitney Houston.

If audiences get confused by this abundance of Cinderella that’s completely understandable, especially if they assume that the Rodgers and Hammerstein version has something to do with Disney. Any confusion will only be exacerbated by the 2013 Broadway production, which involved some major revision in the book by Douglas Carter Beane and a production design that looks like it took inspiration from Disney’s Beauty and the Beast.

The Broadway production won a Tony Award for William Ivey Long’s lush, plush, jewel-toned costumes (and a gold dress for Cinderella that probably has Belle’s name tag sewn into it somewhere), which actually provide some of the liveliest moments in the show. Both the fairy godmother and Cinderella make flashy costume changes before our eyes: the godmother going from crone to magical beauty (like the witch in Into the Woods) and Cinderella going from charwoman to princess faster than you can say bibbidi-bobbidi-boo.

The touring company of the Broadway Cinderella finally made its San Francisco debut this week and has a short run through Sunday as part of the SHN season. The show played San Jose last year, and if Wednesday’s opening-night crowd is any indication, there are a whole lot of princess worshippers (prinshippers?) right here in the City? Who knew audiences still audibly swooned when a prince kisses a princess? Indeed they do. 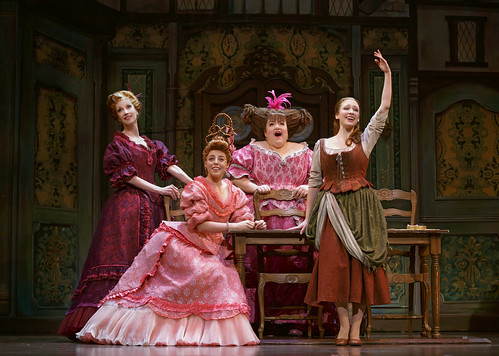 And there’s a lot that’s swoonworthy in this production, most notably the Rodgers and Hammerstein score and the two leads.

Even a secondary R&H score, which this mostly is, has aural treasures beyond compare. How could anyone not enjoy lilting tunes like “Impossible/It’s Possible” and “A Lovely Night” or not succumb to the romantic sweep of “Ten Minutes Ago” or “Do I Love You Because You’re Beautiful?” or the sweet melancholy of “In My Own Little Corner”? This production (like others before it) incorporates R&H songs from other projects like “He Was Tall” (cut from The King and I), “The Loneliness of Evening” cut from South Pacific, “Me, Who Am I?” from Me and Juliet and “There’s Music in You” from the 1953 movie Main Street to Broadway (which featured Rodgers and Hammerstein playing themselves working on this song with Mary Martin).

The score is a definite highlight here and a sobering reminder that no one writes with the lyrical and melodic sophistication and apparent ease of Rodgers and Hammerstein. It’s not simply old-fashioned Broadway – it’s gold-standard Broadway. And that’s why Beane’s re-worked script clunks more than it works. Imagine keeping all the famous bits of Hamlet but reworking the rest with contemporary dialogue and pseudo-political, thoroughly politically correct meanderings. You’d have a mess, and that’s sort of what happens here, granted we’re not quite at the Hamlet level, but still, with a strong musical comedy score you want a book to match its tone, and this one aims for cheap laughs rather than nobility or romance.

As with so many modern re-workings of fairy tales, the princess is no longer a damsel in distress waiting for a handsome but personality-free man to come and save her. This Cinderella (played with gusto by Kaitlyn Davidson) practices the power of kindness (her eventual book will surely make it to Oprah’s book club), and though a dilettante in matters of politics, she’s not afraid to tell the obtuse prince what’s going wrong with his kingdom’s laws and economy. She’s oppressed by her wicked stepmother (a droll Blair Ross) and one self-involved stepsister (Lulu Picart) but treated sweetly by the other stepsister, Gabrielle (Kimberly Faure), who is in love with the newly invented character Jean-Michel (David Andino), the kingdom’s rabble-rouser.

Davidson has a lovely voice, and you root for her from the start, which is always a plus in this rags-to-tiara tale. She is ably supported by Andy Huntington Jones as Prince Topher, a sheltered royal whose parents have shuffled off this mortal crown (unlike previous versions in which the King and Queen are alive and singing). He’s being bamboozled by his trusted vizier (shades of Disney’s Aladdin), Sebastian (Blake Hammond), who is a money-grubbing, land-grabbing, power-hungry creep. In this version, Prince Topher may have the money, clothes and palace, but he is saved by Cinderella, who shakes him out of his aristocratic stupor and sets him back on the throne to glory.

That’s all well and good, but what registers here is what has always registered: the fairy godmother granting life-changing wishes, turning mice into horses, woodland animals (played by annoying hand puppets) into coachmen, a pumpkin into a coach and a dress of rags into a sparking ball gown. That and the kiss and the (spoiler alert on a 1,500-year-old story!) royal wedding.

It seems they keep trying to turn Cinderella into an even bigger fantasy – blowing up the coach and puffing up the dress, you might say – but the story is what it always was: wish fulfillment, sparkles and a happy ending.

[bonus video]
Here’s a look at the 2013 Broadway production of Rodgers and Hammerstein’s Cinderella: